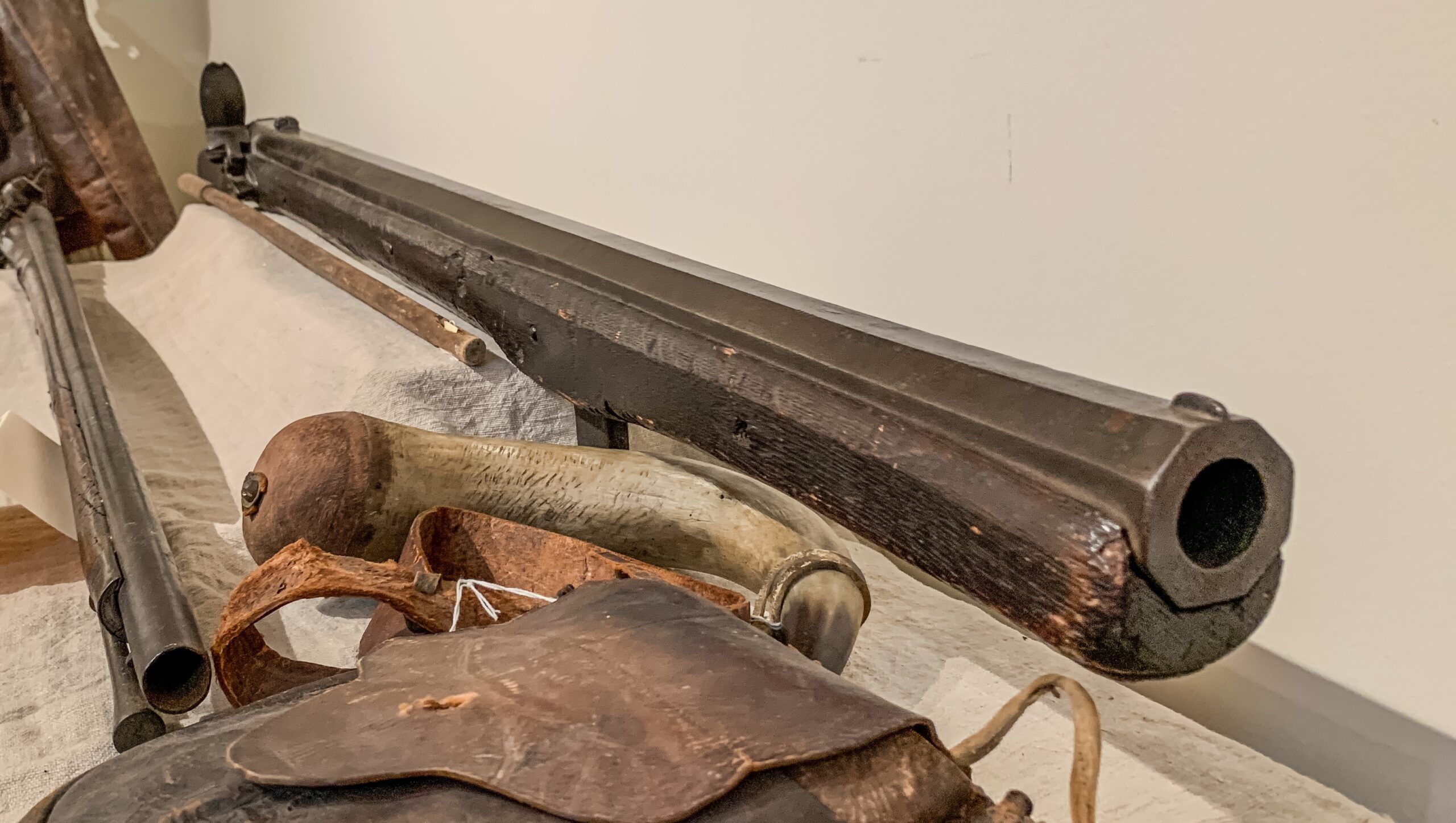 This old “wall gun” has been owned by the Greenbrier County Historical Society’s North House Museum since 1989. It was originally sold to them by Edwin A. Pattison, as having been used by Dick Pointer during the attack on Donnally’s Fort – the second largest Indian/Settler battle which ever occurred within West Virginia’s present-day boundaries. Of course it was Virginia at the time.

Mr. Battison claimed that he bought it many years ago when he lived in Virginia, and that he was told that the gun had belonged to Governor McCorkle, who was a big collector of West Virginia related relics. He claimed that it was supposed to have been present at Donnally’s Fort in 1777 during the attack in which Dick Pointer used it to repel the initial rush of the fort gate.

This 18th century “wall gun,” meant for mounted use on the wall of a fort, was allegedly grabbed by Dick Pointer at Fort Donnally when the Shawnee attacked in 1778, and used to fire at the Indians rushing the fort’s door, killing at least two of the warriors with the load of “swan shot” from the huge musket. It weights 47 pounds, and has a bore of about .93 caliber. It has German (Nuremburg) proof marks on the barrel, which I’m told by knowledgeable sources, likely dates to the late 17th century.

It’s stocked in oak, with no embellishments, or even a side plate, with a flintlock lock. It was likely restocked in the early 18th century, I would guess, from whatever its original configuration was. The lock is huge, and may be handmade. I didn’t see any markings on it, but I didn’t get a great photo of it. It has a rectangular pan, which is supposed to be an earlier design.

In reality, the museum admittedly cannot verify the claim that this is the rifle used by Pointer. I’m told that the state museum in Charleston also claims to have the Pointer gun. This is the gun they have on display as Pointer’s gun, as well as what they are claiming was Lewis Wetzel’s gun:

First of all, there’s no way the top rifle was used by Lewis Wetzel in the 18th century, since it’s clearly a later 19th century mountain-style rifle, possibly always having been a percussion action, in which case it’s much later. It could have been a flintlock originally, but it still appears to be of a post 1840 or so design. I have several almost identical, as they were very common in the Appalachian Mountains – hence the name. They are usually smaller caliber, in the .30 to .40 caliber range. Wetzel’s rifle undoubtedly would have been a larger caliber in the .50 or larger range.

Regarding the gun Pointer used, we have the following documentation:

Famous Monroe County female writer, Ann Royall, who interviewed survivors of the attack in 1824, wrote that the one available gun accessible to Pointer was loaded with “old nails, pieces of iron, and buckshot.”

The musket at the state museum is absolutely not consistent with being loaded with swan shot, or nails, etc. While it does appear to be a smoothbore which could be loaded with shot, it’s likely around .60 caliber or so, and probably has a thin walled barrel. Usually something like a blunderbuss would be loaded with miscellaneous items, as a short range defensive weapon. And usually a large punt gun, or huge fowling smoothbore, would be loaded with “swan shot.” But a large caliber, 46 pound wall gun could be as well. So I would argue that the North House Museum has the better claim to having been the gun used by Pointer.

The wall gun would have been owned by wealthy landowner, Andrew Donnally. If he could afford to build the fort, and he had journeyed into the Greenbrier Valley knowing he was going to build a fort, why not bring a wall gun with him?

In any event, this is a neat old gun, and appears to me to be consistent with the description of the gun used:

“The evening before battle, the Indians came to the top of Brushy ridge at a point called Bald Knob, one mile from the fort. In the morning they left the ridge, came down to the creek, about one quarter of a mile from the fort, then followed the creek down to the fort; then knowing the stockade gate was open, made a sudden rush for the fort. William Hughart, who was standing at the door, saw the Indians and instead of firing his gun to give the alarm he drawled out in his peculiar style, “Yonder they come,” and pushed the door shut.

The Indians made a rush for the door and began to cut it down with their tomahawks. They could open the door only partially, on account of a hogshead of water placed be hind the door. Hammond was soon on his feet. Dick Pointer has seized an old musket loaded heavily with swan shot, etc., and was trying to decide what to do. At this the Indians had partly forced the door open. Hammond cut the first down with his tomahawk and Dick fired, mowing a swathe to the stockade gate, the recoil of the gun knocking him over. This awakened the people above, and springing from their beds, they grasped their rifles and opened a galling fire, which drove the Indians outside the stockade.”

On this old gun, you can see where it was mounted to a wall, hence the name, “wall gun.” If not Fort Donnally, I can almost guarantee it was somewhere else just as historic. Perhaps this could have been at our fort – Byrnside’s Fort. Or there may have been one like it.

Your average fortified home on the frontier would not have been able to afford this. Mr. Donnally was one of the wealthiest men in the Greenbrier Valley frontier , so he would have been able to have this big, European-made defensive musket.

Another source: “The Dick Pointer Gun” by Joan C. Browning, The Journal of the Greenbrier Historical Society, Vol. VI, No. 2, 1993.

3 thoughts on “Was this “wall gun” used by Dick Pointer during the attack of Donnally’s Fort?”