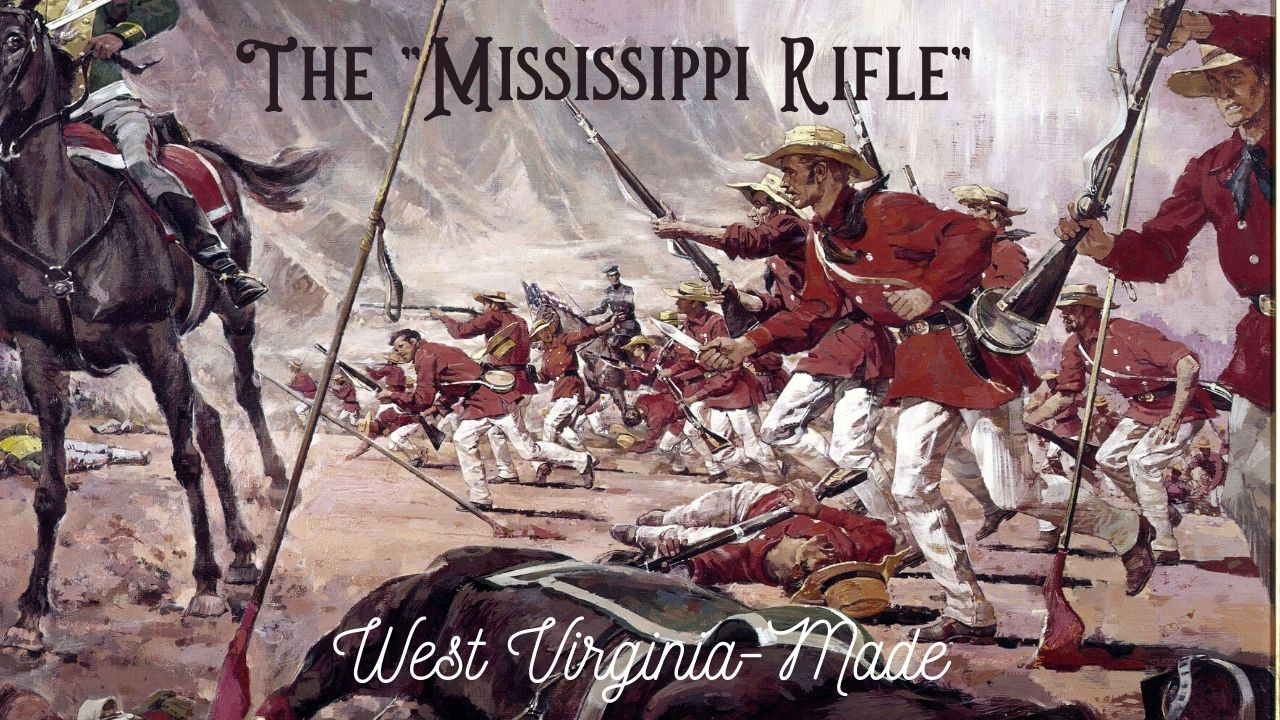 The M1841 U.S. percussion rifle, manufactured in Harpers Ferry, (West) Virginia, is one of the best-looking U.S. military issue rifles in our nation’s history. You may know it by its other name – the “Mississippi Rifle,” or by its characteristic brass hardware, short length, and walnut stock. But did you know how it obtained its name, given that it was made in West Virginia?

In 1841, flintlock smoothbore muskets were still the standard primary infantry weapon. The Army sought to develop a new single-shot muzzleloading rifle with the simpler, and more reliable, percussion ignition system. The design was .54 caliber with fixed rear sights, 7 groove rifling, and utilizing a patched roundball. Later, in 1855, it was modified to use the .58 caliber minie ball, which was to see widespread use in the coming Civil War.

The new rifle was first produced according to various contracts with private arms manufacturers, but ultimately was mass-produced first at the U.S. Arsenal at Harpers Ferry, Virginia – now West Virginia obviously. And here’s how it earned its name. The first unit to which it was issued was a unit of volunteer militia from Mississippi led by one Jefferson Davis. Why?

The Mexican American War began in 1846. Jefferson Davis raised a volunteer regiment known as the Mississippi Rifles. Col. Davis led the regiment under the command his former father in law, Gen. Zachary Taylor – later President of the United States. Col. Davis sought to arm his men with the M1841 percussion rifle. To get them, he had to barter with President James K. Polk. In exchange for the weapons to arm his unit, Davis promised Polk that he would remain in Congress long enough to vote in Polk’s favor on the Walker tariff. Gen. Winfield Scott objected to the issuance of the rifles to Davis, but Polk made it happen anyways. Thus began a lifelong feud between Scott and Davis.

Col. Davis’ unit was armed with the M1841. Thereafter they participated in the Battle of Monterey in 1846. In February of 1847, they fought bravely in the Battle of Buena Vista. The Mississippi Rifles were led by Gen. Taylor against the much larger Mexican Army under Gen. Santa Anna, which at the time was considered a much better equipped professional army. The rifles proved their worth after Davis’ men stopped a charge by Mexican lancers, emptying their rifles and then surging forward to attack the surprised Mexicans with their Bowie knives. The battle also involved the Texas Rangers, and other units of horsemen from Kentucky, Illinois, Indiana, and Arkansas. During the battle, Col. Davis and his Mississippi Rifles performed bravely, during which Davis was wounded in the foot. Thereafter, the M1841 would be known as the “Mississippi Rifle,” in honor of the men from Mississippi.

Though the battle was largely a stalemate, Santa Anna withdrew his army, leaving the battlefield to the surprised Americans, who had expected to fight at least another day. Among the dead on the American side was Henry Clay, Jr., the son of Henry Clay, who stood in opposition to the Mexican War. His body was later disinterred from its Mexico location and transported to the U.S. by Jefferson Davis. Also among the dead were Archibald Yell, former Governor of Arkansas, and John J. Hardin of Illinois – a Whig political rival of Abraham Lincoln.

Upon receiving news of the battle, Americans largely held a favorable view of the ordeal. The American Army was composed largely of volunteers from the frontier states, who engaged the largely professional Mexican Army led by the notorious Santa Anna. Some of the participants wrote of their experiences, and several depictions of the battle scene were produced in the U.S.

Also in 1856, the U.S. Army organized a new unit, the U.S. Regiment of Mounted Riflemen, initially to police the Oregon Trail. But they too were diverted to the Mexican War, distinguishing themselves under Gen. Winfield Scott. With them, and also armed with the M1841 rifle, was a Texas Ranger named Samuel Walker, who had helped Samuel Colt design a five-shot revolver, known as the legendary Walker Colt pistol. By 1848, the Mississippi Rifle had earned a reputation as a capable weapon for the western frontier, and was perhaps one of the first weapons to be of service in the Wild West.

Army Lieutenant George D. Bremerton accompanied Kit Carson, who was armed with a Mississippi Rifle, on a trek from Los Angeles to Santa Fe, and afterwards commended, “I cannot too strongly recommend [the M1841] for every description of frontier service.” Congress agreed, and enacted legislation in March of 1849, which authorized the Army and state arsenals to sell weapons to westbound settlers at the Army’s cost, as well as a $50,000 appropriation to fund the logistics of the program. Thus, the United States Congress ordered the United States military to sell its state of the art issue rifles to civilians for their own protection while traveling West. Let that sink in for a minute, and think about how far we’ve strayed from that concept . . . .

Mississippi Rifles were among the numerous wagon trains of settlers traveling through dangerous territory of the early Wild West. In the summer of 1853, Apaches attacked one of the wagon trains, stealing most of their livestock and supplies. Thirteen men rode after the Apaches. Eleven were killed after encountering 150 warriors, which resulted in thirteen new Mississippi rifles for the Apaches, as well as eighteen six-shooters.

In 1854 mail express rider James M. Hunter and other Texans used Mississippi Rifles, as well as the new Sharps Rifles, to repel attacks on their mail coaches by Mescaleros. They were also involved in a March, 1856 battle between the Yakima, Klickitat and Cascade Indians at a small Columbia River settlement in Oregon. They were also favored by the Mormons in Utah, who as late as 1866, had roughly a dozen M1841s in a militia company of 67 men.

They saw use in the thousands during the Civil War, and were especially favored by the South, who lacked access to the newer weapons being produced in the North. They had never fallen out of use in the Wild West – especially in Comanche territory, where the fighting never ceased. Between 1858 and 1876, a Uvalde County settler stood of at least nine Indian attacks using his Mississippi Rifle. Henry Wanz described his time guarding ranchers’ herds of cattle near San Antonio, which involved running gun battles with the Comanche. While some had breechloading Spencer rifles, the majority of them were armed with the trusty M1841.