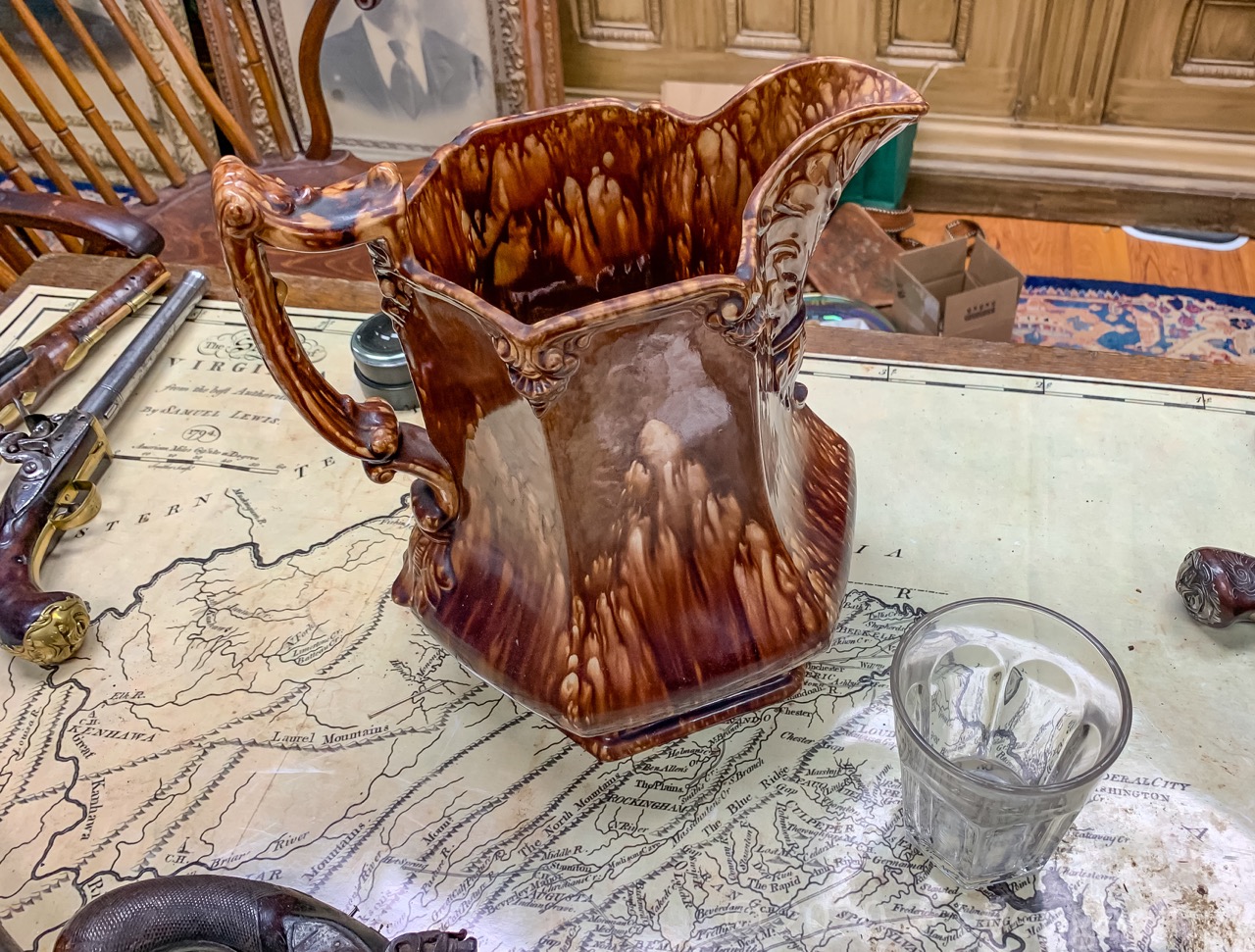 In 1859, abolitionist John Brown’s attempt to bring about the end of slavery through an armed insurrection came to a quick end when he and his men were captured in an engine house in Harpers Ferry by a group of Marines led by none other than Robert E. Lee.

Brown was transported to Charles Town, where he was tried for murder, inciting slaves to rebel, and treason. Despite a spirited defense, Brown and several of his co-conspirators were convicted and sentenced to death. Brown was executed only a few blocks from the courthouse. John Wilkes Booth, the actor who would later assassinate President Lincoln, attended the execution. Many of the records from the trial, which were held by the Jefferson County Clerk, have been digitized.

Judge Richard Parker, the justice of the circuit court for the town of Charles Town assigned to oversee the trial, has been attributed by some with having said to the jury:

I will not permit myself to give expression to any of those feelings which at once spring up in every breast when reflecting on the enormity of the guilt in which those are involved who invade by force a peaceful, unsuspecting portion of our common country, raise the standard of insurrection amongst us, and shoot down without mercy Virginia citizens defending Virginia soil against their invasion.

Not quite something you’d want to hear as Brown’s defense lawyer, which also according to the history books, was also lacking in fairness.

Brown very likely received inadequate counsel to defend him. His defense lawyers were appointed by the court, and they expressed strong misgivings to the case. The recent insurrection and hysteria in the community led to Brown’s trial being rushed with very little time to prepare for a defense just one week after the Harper’s Ferry raid. Brown attended the trial supine upon a cot, since he had suffered multiple saber wounds when captured. During the opening arguments, Brown’s appointed defense counsel admitted the fact of the crimes, shared in the outrage of the community, and apologized for defending Brown.

Lawson Botts, a prominent Virginia attorney, was appointed to be the lead defense counsel; he delivered the opening arguments. George H. Hoyt, another prominent lawyer, arrived a few days later from Massachusetts and took a hesitant role in the closing days of the trial. Hoyt was hired to defend Brown by John W. Le Barnes, one of the abolitionists who had given money to Brown in the past. Samuel Chilton, a lawyer from Washington D.C., was also brought in as Brown’s legal counsel. Charles J. Faulkner and the Charles Town mayor, Thomas C. Green, were also appointed to be defense counsels by Judge Parker, but they soon stepped down two days into the trial after John Brown expressed “no confidence” in them in open court. Hiram Griswold, a lawyer from Cleveland, Ohio, arrived late in the trial on October 31 and delivered the defense’s closing argument.

Even in the event that there was no judicial bias and inadequate lawyers, Brown’s defense team had a difficult and nearly impossible task of successfully representing him, since Brown and his men had planned and carried out an insurrection, signed the provisional government charters, fired upon local, state and federal forces and caused at least five civilian deaths.

The defense’s stronger points are quite amplified in the apologia of Redpath, but are clear enough even in the “consensus” account. On the first day of the trial, the defense first attacked the multiple count indictment and called for severance of the separate counts within this ‘all or nothing’ indictment. The defense repeatedly asked for a continuance of at least a month to prepare a defense. Brown himself asked Judge Parker for a few more days to recover from his wounds. More time was requested again when George Hoyt arrived. All these motions were denied. Unable to slow the trial on (appropriate) procedural grounds, and unable to get the unusual indictment thrown out, the defense stressed jurisdictional ambiguities and extenuating circumstances.

The defense claimed that the Harpers Ferry Federal Armory was not on Virginia property, but since the murdered townspeople had died in the streets outside the perimeter of the Federal facility, this carried little weight with the jury. John Brown’s lack of official citizenship in Virginia was presented as a defense against treason against the State. Judge Parker dispatched this claim by reference to “rights and responsibilities” and the overlapping citizenship requirements between the Federal union and the various states. John Brown, an American citizen, could be found guilty of treason against Virginia on the basis of his temporary residence there during the days of the insurrection.

Three other substantive defense tactics failed. One claimed that since the insurrection was aimed at the U.S. government it could not be proved treason against Virginia. Since Brown and his men had fired upon Virginia troops and police, this point was mooted. His lawyers also said that since no slaves had joined the insurrection, the charge of leading a slave insurrection should be thrown out. The jury apparently did not favor this claim, either.

Extenuating circumstances were claimed by the defense when they stressed that Colonel Washington and the other hostages were not harmed and were in fact protected by Brown during the siege. This claim was not persuasive as Colonel Washington testified that he had seen men die of gunshot wounds and had been confined for days.

The final plea by the defense team for mercy concerned the circumstances surrounding the death of two of John Brown’s men, who were apparently fired upon and killed by the Virginia militia while under a flag of truce. The armed community surrounding the Federal Arsenal did not hold their fire when Brown’s men emerged to parley. This incident is noticeable upon a close reading of the published testimony, but is generally neglected in more popular accounts. If the rebels under a flag of truce were fired upon, it did not appear to be a major issue to the biased judge and jury.

During the war, the courthouse in Charles Town was damaged in battle and even used as a stable. As the end of the war drew near, its metal roof was stripped off and melted down for bullets. The county seat was returned to Charles Town in 1872, and the courthouse was repaired and enlarged, adding a clock to the belltower. The trial of John Brown was not the only trial at this courthouse which captured the nation’s attention. In 1922, a change of venue made Jefferson County the site for the trials of several union leaders who were prosecuted for their roles in the Battle of Blair Mountain. Today, the courthouse is still in use, and a portion of the courtroom where John Brown was tried is now used as a hearing room for the Jefferson County Commission.

Here’s the speech he gave following his inevitable conviction:

I have, may it please the court, a few words to say.

In the first place, I deny everything but what I have all along admitted, the design on my part to free the slaves. I intended certainly to have made a clean thing of that matter, as I did last winter, when I went into Missouri and there took slaves without the snapping of a gun on either side, moved them through the country, and finally left them in Canada. I designed to have done the same thing again, on a larger scale. That was all I intended. I never did intend murder, or treason, or the destruction of property, or to excite or incite slaves to rebellion, or to make insurrection.

I have another objection; and that is, it is unjust that I should suffer such a penalty. Had I interfered in the manner which I admit, and which I admit has been fairly proved (for I admire the truthfulness and candor of the greater portion of the witnesses who have testified in this case), had I so interfered in behalf of the rich, the powerful, the intelligent, the so-called great, or in behalf of any of their friends, either father, mother, brother, sister, wife, or children, or any of that class, and suffered and sacrificed what I have in this interference, it would have been all right; and every man in this court would have deemed it an act worthy of reward rather than punishment.

This court acknowledges, as I suppose, the validity of the law of God. I see a book kissed here which I suppose to be the Bible, or at least the New Testament. That teaches me that all things whatsoever I would that men should do to me, I should do even so to them. It teaches me, further, to “remember them that are in bonds, as bound with them.” I endeavored to act up to that instruction. I say, I am yet too young to understand that God is any respecter of persons. I believe that to have interfered as I have done as I have always freely admitted I have done in behalf of His despised poor, was not wrong, but right. Now, if it is deemed necessary that I should forfeit my life for the furtherance of the ends of justice, and mingle my blood further with the blood of my children and with the blood of millions in this slave country whose rights are disregarded by wicked, cruel, and unjust enactments, I submit; so let it be done!

Let me say one word further.

I feel entirely satisfied with the treatment I have received on my trial. Considering all the circumstances and animosity toward me, it has been fair and more generous than I expected. But I feel no consciousness of guilt. I have stated from the first [day] what was my intention and what was not. I never had any design against the life of any person, nor any disposition to commit treason, or excite slaves to rebel, or make any general insurrection. I never encouraged any man to do so, but always discouraged any idea of that kind.

Let me say, also, a word in regard to the statements made by some of those connected with me. I hear it has been stated by some of them that I have induced them to join me. But the contrary is true. I do not say this to injure them, but as regretting their weakness. There is not one of them but joined me of his own accord, and the greater part of them at their own expense. A number of them I never saw, and never had a word of conversation with, till the day they came to me; and that was for the purpose I have stated.

Now I have done.

Here’s the wagon in which he was transported to his execution, riding along with his coffin…..