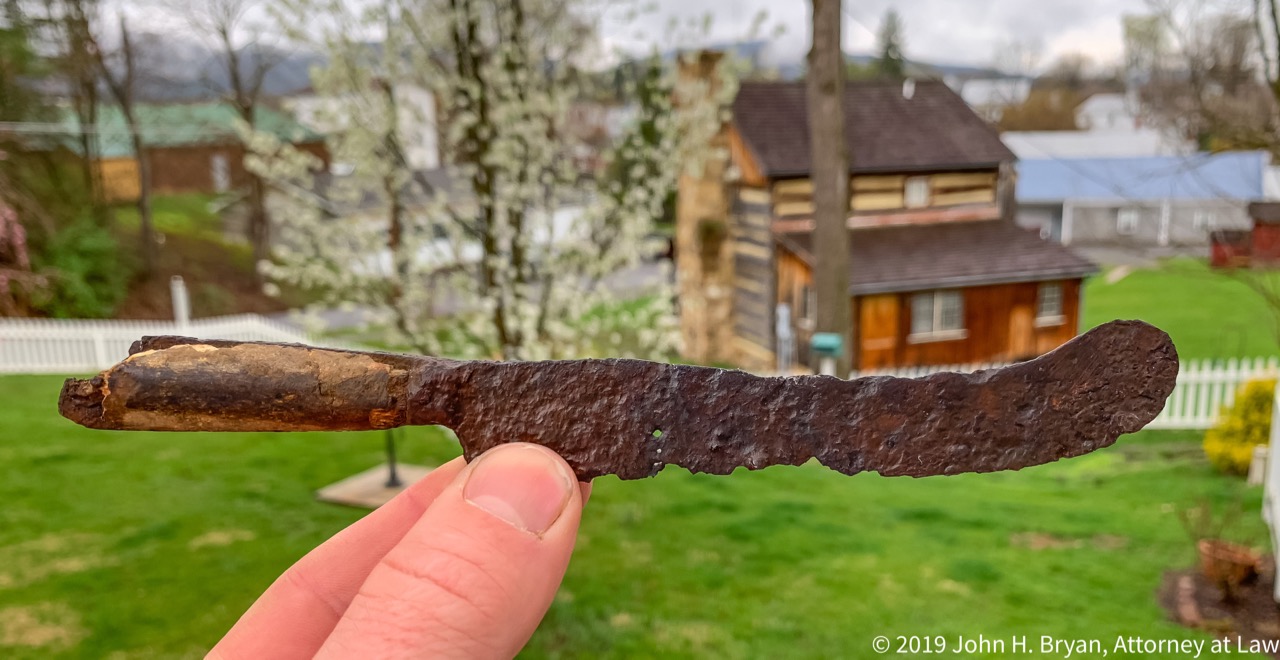 Knives found at Byrnside’s Fort, both as they came out of the ground, and as they undergo preservation efforts. Most of the knives we’ve found so far are common colonial era table knives – almost all with a full tang. We’ve only found one so far with a rat-tail tang. Either bone or wood handles, sometimes with cross hatching designs. It’s a tremendous amount of work to get them all preserved and documented.

The knives were usually paired with forks, which we’ve also found in abundance, and sometimes with matching handles. And sometimes not. All the forks so far have been two-tined.

The above knife is preserved. The beeswax coating on the iron dramatically slows the deterioration. After they are recovered out of the ground, they look about like these below.

Before long, once out of the ground and exposed to oxygen, they begin to deteriorate at exponential speed, causing a mad rush to get them all de-rusted as best as possible, and coated with a good protective coating, such as bees wax. We’ve been using Howard’s Beeswax.

They come out of the ground looking something like this. Then, once they dry, they start to turn rust colored and flaky, as the above examples.

And, in the end, here’s the same knife (the lower one) after being preserved – at least as best as could be achieved) with a fresh coat of wax. We still haven’t finished the rest of the lower knife.

Most of them are broken and in pieces. Additionally, even after preservation, they still need care. Notice how the below knife still continues to rust, as the beeswax eventually dries and fades.

This is the same knife before restoration began.

But, it’s a labor of love that tells us so much about our forefathers, and about the people who lived at Byrnside’s Fort, both during the fort occupation and as a plantation thereafter. Sometimes you have to just lay things out and look at the big picture.

This one had a cut it in for some reason. It’s the only one so far that has been like that.