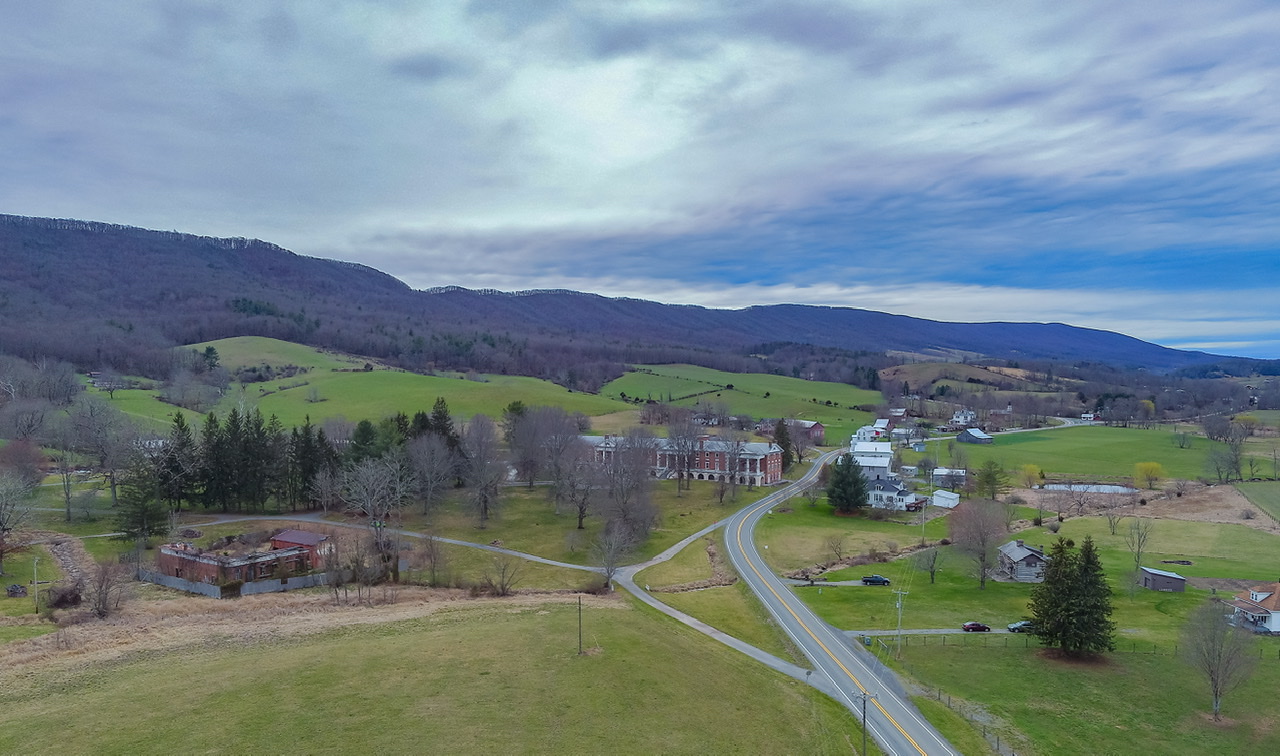 This past Saturday I finally got the ‘ole drone working again, and set out to hit some local spots I had been wanting to photograph from above. Here is the Old Sweet Springs Resort, in the Sweet Springs Valley, which begins in West Virginia, flowing into Alleghany County, Virginia (and much of that portion of Alleghany County, Va. was actually Monroe County prior to its formation).

This looks like the same photo as the above postcard, but it’s actually different. It’s close though. Obviously the postcard has been colorized.

Below is the drone view of Sweet Springs, from about 350 feet up or so, looking at the front side of the old hotel, facing roughly west (so the hotel faces roughly east). If you follow the road into the background, it takes you to Union, W. Va. If you follow it the other direction, it takes you to Crows, Va., and then on to Covington, Va. Or, if you take the intersection at Crows, you head towards I-64 and White Sulphur Springs, W. Va. Looking back at the background of the below photo, if you take the intersection at upper right, turning left, it takes you over Peters Mountain and into Paint Bank, Va., and then eventually on to Salem, Va.

Old Sweet Springs, in Monroe County, West Virginia, is one of America’s oldest mineral water resorts, as it stands today, better than any other complex reflects the vacationing aspect of the country’s fashionable society just as it functioned almost two hundred years ago.

As early as 1760, a man named James Moss is believed to have built a cabin at Sweet Springs, but was forced to vacate the property in 1774 when King George III granted these lands, and others, to the prominent Lewis family. William Lewis, brother of Gen. Andrew Lewis, built a two-story log cabin about a mile downstream from the springs, in what is now called Sweet Chalybeate Springs. I presume he did this, because this location is much more pleasant, having a great little waterfall. However, it doesn’t have as much land, and is further downstream from the source of the springs, if one is looking at it from a medicinal and entrepreneurial perspective.

Around 1783, he moved to the current site of the resort and began to develop that area, which lasted under his ownership until 1802. Several surviving records show Sweet Springs to have been functioning as a commercial enterprise in the 1790s, accommodating an average of fifty patrons in log cabins. Although I don’t believe they are any longer standing, I did photograph the surviving remnants of the property’s log cabins back when a client of mine still had an ownership interest in the property. He let me keep one of the rose head nails out of the logs, which I still have.

This is the 1857 Edward Beyer painting of the site. The grand plan of the place was to build a mirror image large hotel building, and connecting cabins in a horseshoe shape, which Beyer apparently incorporated into his painting for some reason. But it never came to fruition. Just the building to the right was built and the cabins adjacent to it. You can see the existing structure towards the right of the painting.

Contrast that with the current view:

William (Lewis) turned  the Sweet Springs property over to his son, John by 1805. He divided 438 acres of the farm between the Sweet and Red Springs between his sons John and Charles on October 25, 1804

The land remained in Lewis hands for several years until John became involved in a large debt which led to several deeds of trust for the property, including Sweet Springs.  When the debts were not paid on time, various tracts were sold and Oliver Beirne became owner of the Sweet Springs tract on August 18, 1852. The land changed hands several times with transactions between Oliver and Christopher Beirne, and Allen T. Caperton . . . .

Around 1834, Dr. Lewis replaced the cabins with a huge  two-story brick building.  It was 250 feet wide and forty feet deep.  The upstairs contained thirty-six bedrooms, each around fourteen feet square.. The dining room on the first floor was 160 feet long..  The plans for the hotel, built in 1839, appeared to have been drawn by Thomas Jefferson.  This is disputed by some, but the resemblance is obvious. John B. Lewis was forced to sell the hotel for some unknown reason. . . . The resort was sold several times before being bought from D.M. Taylor of Roanoke, to be turned into a TB sanitarium. That venture was not successful and the property was opened again in 1945 to be used as a home for the elderly and was known as Andrew S. Rowan Memorial Home.

NOTE: As it mentions above, Christopher Beirne, the Civil War era owner of our fort – Byrnside’s Fort, a.k.a., Willowbrook Plantation, was also part-owner of Sweet Springs during this period of time.

The central purpose of the place was to use the highly-mineralized spring water flowing off the property, which you can see snaking through the property in the below photo. Spring water was an important part of 19th century health and medicine.

WILLIAM BURKE ON THE SWEET SPRINGS

The Sweet Springs, sometimes referred to as the Old Sweet Springs, are located in Monroe County in what is now West Virginia and are said to have been discovered in 1764 before other mineral waters of the area. Dr. Burke writes that Dr. Lewis who apparently owned the property at the time of the first edition of his book in 1842 had built a two story, brick house with an imposing appearance. This building, combined with a number of brick and framed cottages, provided accommodations for 350 people and were a major improvement over the earlier log cabins. However, by the time his second edition was printed, Dr. Burke was concerned that the death of Dr. Lewis had resulted in the estate being annually rented out to the highest bidder for the prior three years. He wrote, “The house remains in an unfinished state, and like all houses so left, without an owner, it is already evidencing dilapidation; and, should the decision of the questions now in litigation be delayed many years, its decay will be rapidly progressive.”

Since the waters at the Sweet Springs were highly stimulating, they were not recommended for cases of inflammatory disease or for those predisposed to tuberculosis and other lung related illness. People of sanguine temperament and women “in a delicate condition” or liable to severe periodical hemorrhages were discouraged from using the waters internally or by bathing. Dr. Burke strongly condemned the pernicious practice of imbibing “mint julaps” or other spirituous mixtures upon leaving the bath. But Dr. Burke asserted that aged persons, free from organic disease, would “find youth and vigor and elasticity at the bottom of this noble fountain,” and with a daily plunge could live to the “fabled age of the crow.” Burke also cautiously recommended the Sweet Springs for certain cases of uterine functions, dyspepsia, and nephritic affections.

Here are the remnants of the original bathhouse/swimming pool. Unfortunately, the last owner tore down the huge brick pillars for some reason.

This shows the springhouse in relation to the main hotel:

This is view looking in the opposite direction, towards Crows, Virginia. The Virginia border is about where this road meets the trees in the distance. Not far at all.

Even Thomas Jefferson mentioned using the water at Sweet Springs, in a letter to Fulwar Skipwith, U.S. Consul to the French colony of Martinique (and distant cousin of Jefferson) 1791:

Abandoned Online has a good post on the property with some great pics. Check out the massive fireplace. We obtained some original iron andirons from the property, which very well may have sat in that fireplace.

This is the old jail on the property. I’ve been inside it before, but I’ve since lost the pics. The bars are still on the windows. It’s constructed of stone. This is no doubt the oldest building on the property and dates to the 18th century. Court was originally held here prior to anywhere else in the area. One of the main things you needed to hold court in 18th century America, was some sort of small jail facility. And here it is, still standing.

The above relic of a home is “Lynnside,” where the Lewis family lived, adjacent to Sweet Springs Resort, which they owned and operated. The below items came out of that house. You can even see where the crock was burned in the fire which devastated the place. Also check out the post I did about them.

After Sweet Springs, I ran over the mountain to Paint Bank, gassed up, and headed up onto Potts Mountain in the Shawvers Run Wilderness area of the Jefferson National Forest. I hiked out onto a stone outcropping known as “Hanging Rock” – though there are at least two other “Hanging Rocks” within a 30 mile radius of this place.

The drone flight footage, in 4K 60 fps, was actually really cool, cloudy day or not. I have to say, I was a little nervous on the takeoff and landing. There wasn’t even a flat spot to use, and little room for error.

Some of the pics from the drone:

I also stopped to check on General Lee’s waterfall, though I didn’t fly the drone there. It was really beautiful on this particular day.

And last, but not least, some drone pics of Byrnside’s Fort, a.k.a. Willowbrook, from the same day. I even got a look down the stone chimneys. I think these are the first drone shots I’ve taken since the new paint job.