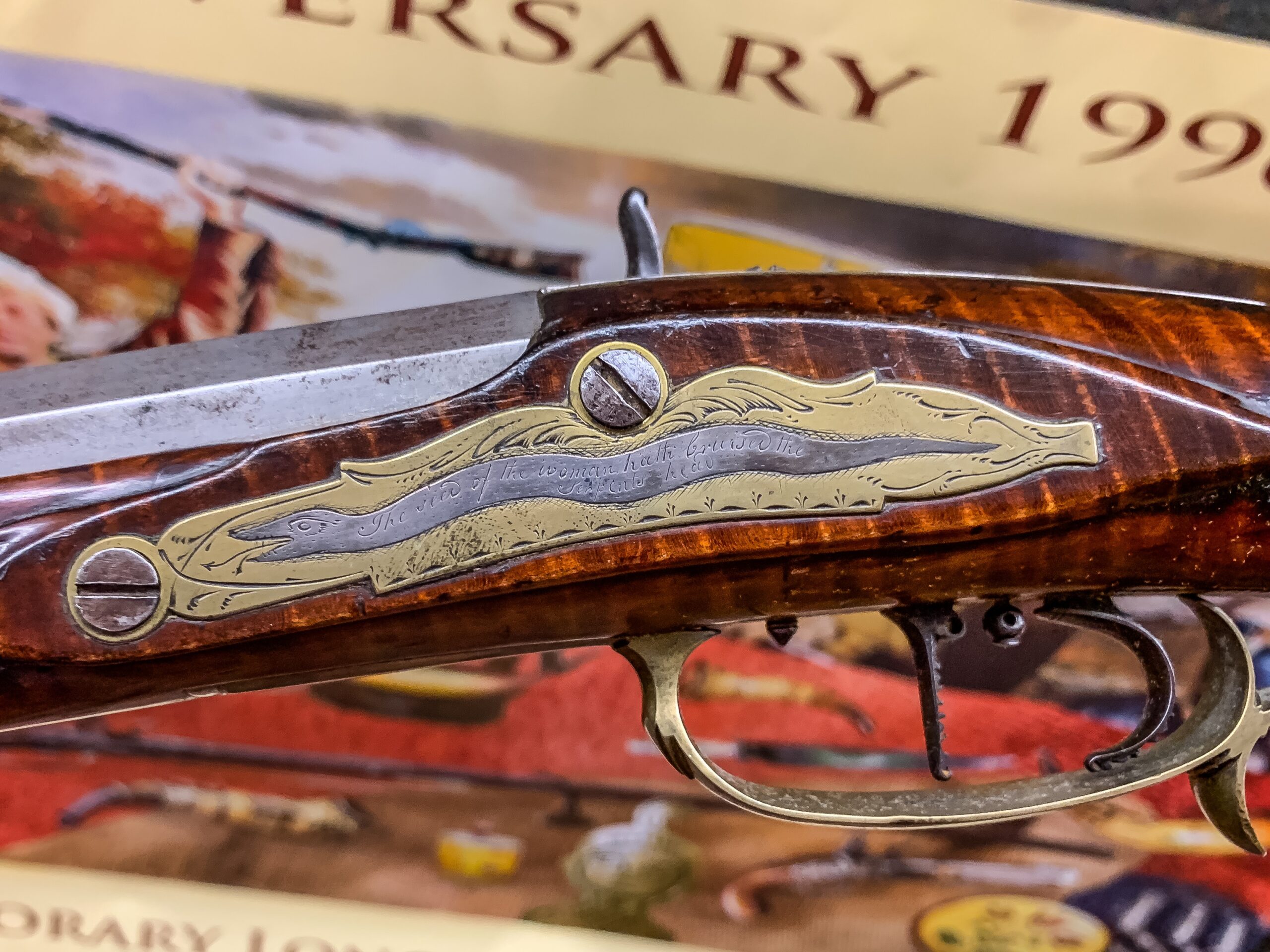 The Nathaniel Vogler Rifle. Made by the Vogler family of Moravian gunsmiths in Old Salem, NC, sometime around the 1815-1835 time period. The expert silver work was likely performed by John Vogler, master silversmith and engraver, as illustrated by the amazing work on this rifle. You can visit his shop in Salem still today.

It was originally a flintlock, but was later converted to percussion by the Voglers themselves in an expert and beautiful manner.

Old Salem was a Moravian village, and is still there today as a living history museum. Much like Williamsburg, except smaller and all original. The Vogler gun shop is still there, and still in operation. It is America’s oldest gun shop still in operation. I highly recommend visiting, and taking your kids. The museum Museum of Early Southern Decorative Arts is also on site, in which this gin was displayed for some time.

The head with the bird of prey on top represents the Vogler family. In Germany, they were “bird keepers,” which is the origin of their name. Keepers of birds of prey for hunting involved wearing a cap where the bird could land on your head.

On the side plate of the lock, a snake is engraved, and in the snake is a Bible verse: “The seed of the woman hath bruised the serpents head.” This has an interesting backstory in Christianity and Judaism.

I will put enmity between thee and the woman, and between thy seed and her seed: he shall bruise thy head, and thou shalt bruise his heel

The seed of the woman or offspring of the woman, drawn from Genesis 3:15, is a concept which is viewed differently in Judaism and Christianity. In Christian theology the phrase is often given a Messianic interpretation.

In rabbinical Judaism, the contrasting groups of “seed of the woman” and “seed of the serpent” are generally taken as plural, and the promise “he will bruise your head” applied to Adam / mankind bruising the serpent’s head. There is a Jewish tradition where a messiah is said to be a remedy to the bruising of the heel of the “seed of the woman.”

Identification of the “seed of the woman” with Christ goes back at least as far as Irenaeus and the phrase “Seed of the woman” is sometimes counted as one of the titles of Jesus in the Bible. A tradition found in some old eastern Christian sources (including the Kitab al-Magall and the Cave of Treasures) holds that the serpent’s head was crushed at Golgotha, described as a skull-shaped hill at the centre of the Earth, where Shem and Melchizedek had placed the body of Adam. More commonly, as in Victorian homilies, “It was on Golgotha that the old serpent gave the Saviour the deadly bite in his heel, which went quite through his foot, fastening it to the cross with iron nails.”

Martin Luther, in his Commentary on Genesis (Luther’s Works, vol. 1, pp. 192–193, American Edition), identifies the “seed of the woman” as the coming Messiah, Jesus, and not Mary: “When we are given instruction in this passage concerning the enmity between the serpent and woman – such an enmity that the Seed of the woman will crush the serpent with all his powers – this is a revelation of the depths of God’s goodness …[who] clearly declares that the male Seed of the woman would prostrate this enemy.”

The Moravians who engraved this verse would have likely agreed with Martin Luther, hence the inclusion on a rifle.

1 thought on “The Nathaniel Vogler Rifle, crafted at Old Salem”