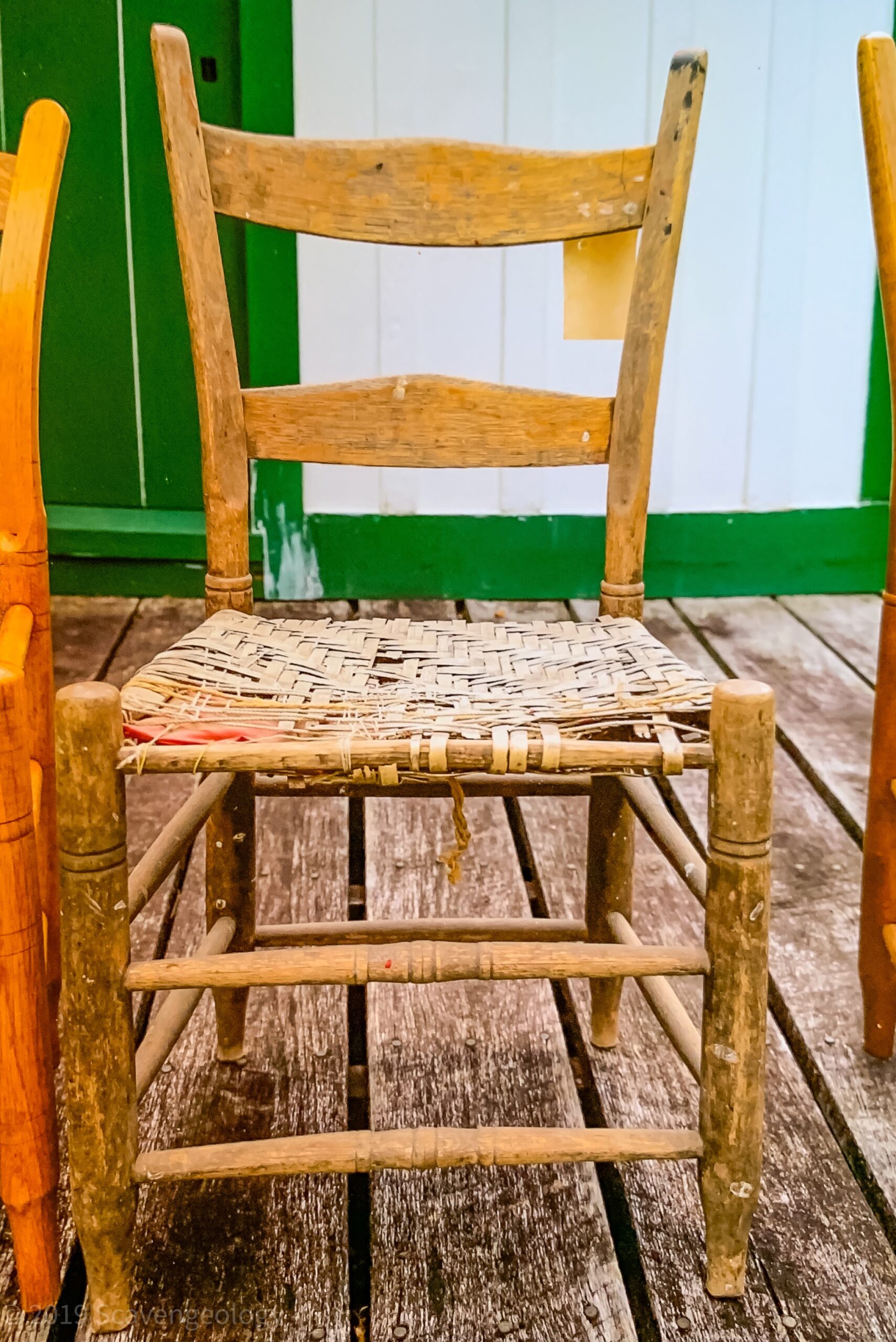 The Virginia Rural Slat-back chair is the chair of the common man, and particularly special to Virginia (especially what would become West Virginia post 1863). It is unique to the region, and has coasted under the radar through the years of the city-dwellers with the taste for a more refined object to sit upon (though it is believed that the fancier Chippendale style “ladder back” chairs were conceived from the lowly slat-backs).

They can still be found in rural Appalachia, and in many cases, just as sturdy as they were in the 18th and 19th centuries. The fancier Virginia estates had these chairs as well, though they were generally to be found in the working areas of the estates, such as the kitchens. Indeed, the rural mountain cabins were full of them, and they were lucky to have them. I read recently that many of the early Ohio pioneers, in the early 1800’s, had in their cabins mostly stools to sit on, or they just sat Indian-style on the floor. See The Pioneers, David McCullough.

These chairs aren’t too comfortable, but their design and rigidity offer another benefit: they are durable, and survived well the movement and tumultuousness of America’s westward expansion and conflicts – especially among the Scots-Irish people of Virginia.

The most famous chair maker of the Greenbrier Valley area was Thomas “Old Tommie” Henning. Until the turn of the century, one to a dozen “Henning Split-Bottom Chairs” could be found in nearly every home in the Greenbrier region. “Old Tommie” made the first twelve dozen chairs “Old Jimmie” Caldwell used when he took charge of the White Sulphur Springs resort in 1812. Nearly every year thereafter, Mr. Henning filled another large order for chairs for the “Old White.” See Greenbrier County WV Heritage, by S.E. Grose, 1997.

“Old Tommie” was also a noted cabinet maker and house painter. He also made spinning wheels, cabinets, and other decorations. Matthew V. Peers, Josiah Osborne, James and Elijah Dyches, and several of his own sons and nephews, all served apprenticeships under him. In 1815, Mr. Henning moved into the town of Lewisburg, where he bought a little two-room log house from Rev. John Pennell. From time to time he made additions until it contained as many as thirteen rooms. “Old Tommie” died at the home of Samuel Gilkerson at the age of eighty-nine. Id.

Legend has it that “Ole tommie” got tired of working his foot pedal powered lathe all day long and decided to invent a large horse-powered cogwheel which would turn a lathe and give his foot a brake. He eventually gained a crowd of followers, interested in his invention. The only problem was, that the finished wheel measured 18 feet in diameter, and once finished, couldn’t fit through the door of his workshop.

So Henning tore out the foundation and one wall of the workshop and put it in. Once inside, they realized there wouldn’t be enough room to fit the horse. Not to be deterred, Tommie just tore down some more walls. Eventually his workshop began to look more like a circus tent. But, it worked, and ever after, Tommie’s foot got to rest.

I found an advertisement where his new invention was marketed to customers. From the Lewisburg Chronicle, published by Mauzy & Gilmer, in the Thursday February 10, 1853 edition, the following ad ran:

The subscriber claims to be the inventor of a plan, whereby split-bottom chairs may be made to last as long again as the best chairs made in the old way. They are so formed, also, as not to sink in the seat, as chairs usually do. Call at the old stand of Thomas Henning, Se., and see specimens.

The Civil War put a temporary stop to most business, including the chair business. But following the War, in his attempts at getting business going again, “Ole Tommie,” ran the following ad in the Greenbrier Independent, March 21, 1867:

The undersigned returns thanks to the citizens of public generally for the liberality they have extended him for Sixty-six years [what a man!] in the chair making business [emphasis original]. He has removed across the street, opposite his old stand where he is now engaged in making a lot of chairs for Mr. Frazier of the Alum Springs, and hopes to be able to furnish his old customers, and all who may give him a call.

County produce of all kinds taken in exchange for work.

However, in the same newspaper, a competitor appeared:

Is now prepared to manufacture and sell chairs at prices much lower than they have ever been sold before, in this community. He is also prepared to do all kinds of painting.

At his new stand, where he puts up chairs by hand and insures them to stand. He has nothing to do with chairs sold at his old stand since the war. As to price, he has never seen the man that puts up as good a chair for the same money as himself.

The slat back chairs themselves, can be with or without arches on the slats. Where there are rockers, they may have been added later. Sometimes they have arms – sometimes not. Sometimes the arms are turned, and sometimes not. The slats are seldom scrolled like on New England slat-back chairs. A lot of the older ones have finials at the top of the back uprights.

The legs are braced with stretchers. Where those stretchers show indications of being hand hewn, are plain and rounded, or are really plain, that’s an indication of older age. Many Virginia chairs are characterized by the use of multiple species of wood, many times made of maple, while many of the New England chairs are of birch. Virginia chairs usually have oak, hickory, or even sycamore for the stretchers. Very few Virginia chairs are of native walnut or cherry – probably because the slat-back was to be used for every-day life, and the finer woods were used for fancy chairs which were used in the parlor, or on special occasions.

Some people think that many of these chairs were sold basically as kits, to be assembled by the end-user. In an account book of a storekeeper in Fincastle, Virginia, there is an entry of 12 “chair parts” in bundles, listed at 50 cents a bundle, bought from James Stark of Boston, Mass., in 1820. They may have come “knocked down,” and sold by traveling cabinetmakers.

Despite the fact that the landed gentry of early days did not care for the slat-back chair, it was the functional chair of the country dweller and today many fine examples can be found in the most out of the way places, because the collector of the more formal types of antique furniture does not search for such informal, crude examples. But how triumphant is the fancier of this type of chair when he or she finds a perfect example of a slat-back and when, best of all, the price is not too high.

Greenbrier Pioneers and their Homes, by Ruth Woods Dayton, 1942.

There were several of these old handmade Virginia chairs in Willowbrook, which have no doubt been here since the 19th century. Most of these look like they very well could be Thomas Henning chairs, or one of his apprentices.

This one has the initials “CH” on the back of the top slat. One of Hennings’ sons or nephews?

Note that the quickest way to tell the difference between a handmade slat-back chair, and a factory made chair, is that all the handmade ones generally have the lines around the uprights, as seen below – up and down them, as if they are penciled in measurements by the carpenter.