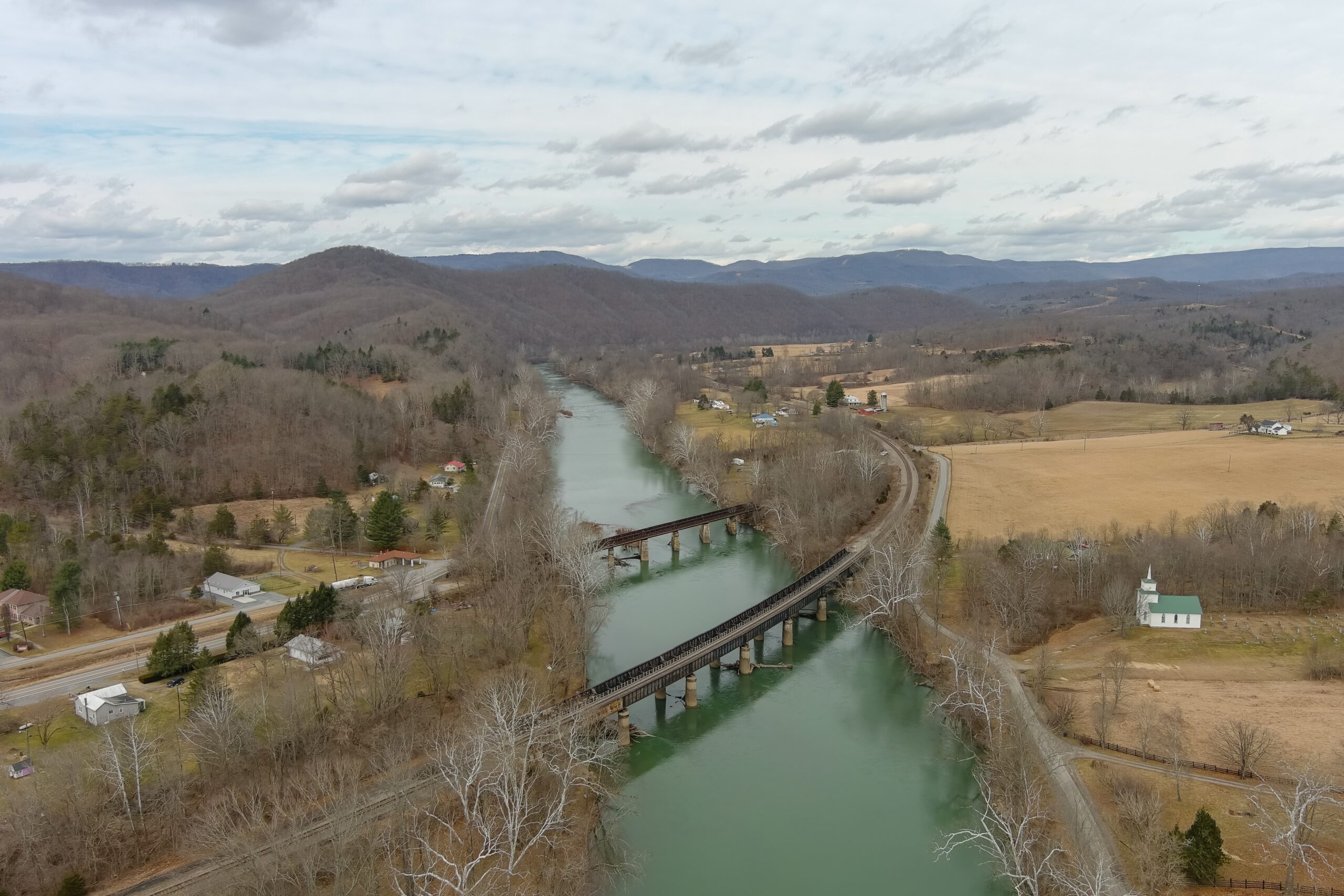 In June of 2019, I wrote about the relatively unknown Gwinn home, well maintained and preserved along the Greenbrier River at a dot-on-the-map known as Lowell, West Virginia. This is now in Summers County, West Virginia, just barely across the border from Monroe County, and indeed originally a part of Monroe County (then Virginia). On Saturday, February 12, 2022, I finally made my way back over there to attempt to acquire some better photographs of the place and surrounding area. Sometimes in the winter time you can get a better view of things, without the leaves on the trees and tall grasses and other foliage. But for some reason this place just really doesn’t like to be photographed, instead preferring to remain in the shadows.

This beautiful brick home, known as the “Manor House,” was built in 1868 by the county’s wealthiest man, “Long Andy Gwinn,” who was the grandson of Samuel Gwinn, who were among the early Virginians to re-settle the Greenbrier Valley in the 1770s, following the destruction of all the settlements by Cornstalk in 1763.

Samuel Gwinn was among the area’s many “Indian Spies” during the Revolutionary War period, serving at many of the local forts. He had also previously served in Lord Dunmore’s War and at the Battle of Point Pleasant. The numerous Indian Spies in the valley ranged between the regional forts, including Byrnside’s Fort, as well as fort right here in Lowell, known as “Van Bibber’s Fort.” Many of these are discussed in the post I did in May of 2020, on the numerous Revolutionary War pension narratives mentioning the service of Indian Spies at Byrnside’s Fort, and other local forts. If you read the portion of that post pertaining to Michael Swope, he notes his usual spy route, which includes this location:

The nature of his Services as an Indian Spy in each of the aforesaid years was to leave Cook’s Fort on Indian Creek descended said Creek to its mouth where it empties into New River and thence down New River to the mouth of Blue Stone, thence to Van-Bibbers Fort on Greenbrier River, and thence to Jarretts Fort on Wolf Creek, making a distance in going and returning of from thirty to thirty-five miles.

In a recent post about the discovery of Cook’s Fort, I roughly mapped out this route, which includes the site of Van Bibber’s Fort, revealing what is roughly a 50 mile roundtrip journey, flintlock in hand, moving quietly and carefully, looking for signs of an Indian war party.

Looking just north of the Gwinn property, you see a modern day railroad crossing across the Greenbrier. I believe that Van Bibber’s Fort stood just about at the location where the railroad tracks cross on the right side of the photo. An old history book says that the fort stood on the site of the later Lowell Hotel, which is now also gone. Another description places the fort a certain number of yards across the river from the Graham cabin, which is the source of estimation of the fort’s location. Alternatively, this fort is sometimes referred to as Fort Greenbrier, as indicated on the nearby historical marker on the other side of the river. There are erroneous descriptions of this fort being located on nearby Wolf Creek. However, it was not. It was here.

Originally, the Gwinn family lived in a log cabin built by Samuel. This is the only known photo of it:

History records the Gwinn cabin as being 20 x 25 feet and located 300 yards south of the current Manor House. If true, this puts the original cabin somewhere along “Wind Creek,” which winds through the farm behind the house, emptying into the river. It’s not a large creek and appears to be spring-fed, which would be appropriate for a cabin site.

Here’s a view looking south at Wind Creek. There’s a small rise of ground on the north bank of the creek which appears to have been a perfect spot for a cabin.

When the Gwinn cabin was razed, its logs are said to have been used to construct the old “Fort Savannah Inn” in Lewisburg, West Virginia – now “Hill and Holler” restaurant. I posted some photos of the logs in the 2019 post.

Samuel Gwinn also applied for a pension, as an elderly man in the 1830s. His statement provides numerous details. While tradition has the Gwinn cabin on the Greenbrier being constructed in 1770, Gwinn’s own testimony is that he didn’t move to the Greenbrier until 1776. Instead, circa 1771, he was drafted into the Augusta County (Virginia) up at Warwick’s Fort, which is at present-day Huttonsville, West Virginia. In 1774 he traveled to present-day Lewisburg, West Virginia to participate in Lord Dunmore’s War, thereafter participating in the Battle of Point Pleasant. The Dunmore campaign resulted in a substantial increase of settlement of the Greenbrier Valley, with many of the veterans returning to settle in the areas they observed while serving in the campaign. Gwinn is likely one of those men. Here’s an excerpt from his narrative:

I the undersigned Samuel Guinn Give the following statement of my age & Revolutionary services – to wit – I am now 85th year of age – was born in augusty county – before Dunmores War of 1774, I done several tours of duty against the indians in Greenbrier at Warricks Fort – after the forgoing service I Enlisted under Capt Louis [sic] and went to Point Pleasant where we had a severe battle with the Indians this was in 1774. a year or two after the last preceeding service I moved to the County of Monroe with my wife & two children was at Thompsons Fort for a year or two. then moved to a blockhouse, finally to Vanbibbers Fort – at these 3 places I forted in the summer months. at other times of the year in the winter I returned to my Cabbin and devoted the winter to Hunting. All the people of the settlement took their families to the Forts in the Summer months where we lived pretty much in common. We would turn out all in a body and work each others corn and potato patches by turns. Whilst we would be working some one or two would be watching for Indians. we worked and watched by turns. we selected from among ourselves some one in whom we had confidence as a sort of leader or Captain – and in this way we got along as well as we could. I was four or five days defending the attack made on Donleys Fort – was called out for this service.

Just across the Greenbrier river from the Gwinn property is the James Graham cabin, still standing and preserved as a museum. In July of 2019, I wrote about the bloody history of the Graham Cabin.

This large original cabin, with river stone chimneys on both ends, was the site of Shawnee attack in 1777, which resulted in the murder of Graham’s ten year old son, as well as his seven year old daughter being kidnapped and held captive for eight years. Eventually, Graham was eventually able to ransom her from the Ohio country. She was located in one of the Shawnee villages in the vicinity of present-day Chillicothe, Ohio. Upon her return, family tradition notes that she had to be watched closely, as she apparently wanted to runaway and return to Ohio. Having been away from her family from the age of seven, and later returning at the age of fifteen or so, that’s not surprising.

During the 1777 attack, a man helping to defend the home was shot dead by the Shawnee, with the ball passing right through the front door and hitting him in the abdomen. Unfortunately, the original door was replaced, and has no bullet hole.

Here’s a gallery of all the drone photos from the flight: