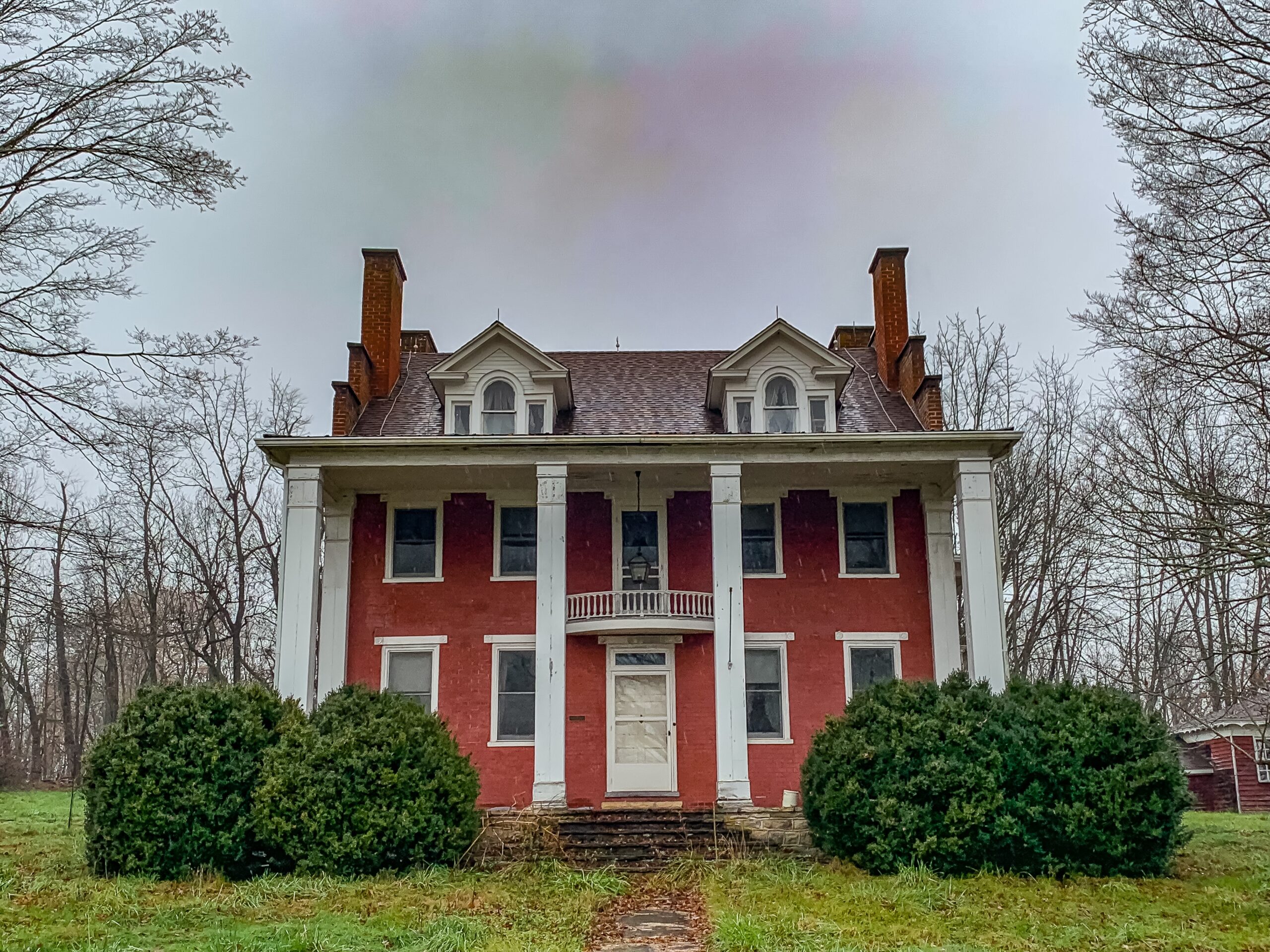 Lewisburg, WV was occupied by the Union army following the Battle of Lewisburg in 1862. On November 8, 1863, a Union soldier entered the home and began to pillage the contents, while verbally abusing Mrs. Creigh.

David was a local merchant, and apparently possessed no firearms at that time. He had a heads up that this soldier was looting nearby homes. So he went to a friend’s home, Mr. Arbuckle, and borrowed his percussion muzzleloader pistol, which he then concealed.

Creigh returned and confronted the soldier. As the man was rummaging through his belongings, Creigh pulled the pistol and demanded that he leave. However, he accidentally discharged the pistol, which missed, and hit the wall. The soldier then pulled his revolver and a struggle ensued. Emily, David’s wife, jumped in and helped aim the pistol towards the soldier as they all struggled to control it. It went off and the soldier was hit.

The wounded soldier continued to struggle. The revolver was now on the floor. Mrs Creigh picked it up, pointed it, and squeezed off another round. As the soldier stopped struggling, Mr. Creigh dumped him near the front door of the home. The soldier’s hands started to twitch, so Mr. Creigh grabbed an axe and crushed his skull.

Knowing he would not receive a fair trial, with the help of one of his sons and an Irish farmhand, they dumped the soldier’s body down a nearby abandoned well about 3/4 of a mile away.

Winter passed, and Spring arrived, without anyone looking for the soldier. But, on May 15, 1864, a slave entered the Union camp and told the commander that the body of a soldier was discovered. They followed him to the spot, and found the well and the soldier. Since it was decomposing, they left it there. The property owner was David Creigh, so he was arrested. He was taken to the Union encampment at Bungers Mill. This mill was on Milligan Creek near present day I-64 just West of Lewisburg. A good friend of ours grew up here, and knows of some buried secrets nearby, which hopefully will be featured in a later post.

Creigh was given a military trial on June 2, 1864, which wasn’t much of a trial. He was found guilty and sentenced to hang. It was also ordered that his home he burned to the ground. At that time, the army was preparing to march to the Staunton, VA area. So they made him march about 100 miles and then while encamped near Brownsburg, VA. They told Creigh he was about to be hanged. He was given some time to make his peace, and he wrote a final letter to his wife.

One of the 300 troops present wanted to perform the execution. Finally, a young private was ordered to do it, and he was hung, on June 10, 1864. Pursuant to the sentencing order, his body was left hanging until the troops left. A local minister cut him down and gave him a temporary burial.

On July 28, Creigh’s body was returned to his home by his son, who was a confederate soldier given leave for that purpose. On July 31, David was buried at the cemetery at the Old Stone Church, where he remains today. His funeral procession was said to be more than a mile long. His wife was buried along side him in in 1879, and a marker erected honoring him as a “martyr in defense of his rights and in the performance of his duties as a husband and father….”

Of course, after visiting his home, I had to visit and photograph his grave. The weather was fitting. Fortunately, the home was never burned, and is still there today. If there ever was a haunted house, this checks all the boxes….

Here’s the National Register of Historic Places information on the Creigh home:

“Montascena,” or the David S. Creigh Place, was constructed in 1834 along the old Lewisburg-Ronceverte Road about two miles southwest of Lewisburg. Probably built by the highly regarded area briclanason, contractor and architect, John W. Dunn, the houseis a high, two-and-one-half story structure with interesting exterior features. Constructed of brick, the front (east) has a typical arrangement of five openings on the first and second floors. Each has a central door (the first level door has an over- light) surrounded by two windows to the right and left. Originally, there was a Greek Revival portico on this elevation, but a wide Victorian veranda replaced it about 1900 and extended across the east and north sides. The present design of the facade was accomplished about 1925 when the veranda was removed and a deep, two-story porch supported by six large, wooden columns was built.’. A small, semi-circular balcony was put outside the second-story door.

The original section of “Montescena” has stepped gables on the north and south with two high chimneys projecting from either end. Windows on these elevations are unusually placed, for they are located within the space between the chimneys, two on both the first and second floors and one on the third. Windows here, -as throughout the structure(except the dormers), have stone lintels and are 1/1 double hung. Palladian windows in the two projecting dormers…..

Poem about David Creigh, written by the wife of General W.H. Smith:

“He lived the life of an upright man,
And the people loved him well;
Many a wayfarer came to his door,
His sorrow or need to tell.
A pitying heart and an open hand,
Gave succor ready and free;
For kind and true to his fellowman
And a Christian was David Creigh.

But o’er his threshold a shadow passed,
With a step of a ruffian foe:
While in silent words and brutal threats
A purpose of darkness show;
And a daughter’s wild imploring cry
Called her father to her side–
His hand was nerved by the burning wrong,
And there the offender died.

The glory of Autumn had gone from earth,
The winter had passed away.
And the glad springtime was merging fast
Into summer’s ardent ray,
When a good man from his home was torn–
Days of toilsome travel to see–
And far from his loved a crown was worn,
And the martyr was David Creigh.

Here where he lived, let the end be told,
Of a tale of bitter wrong;
Here let our famishing thousands learn,
To whom vengeance doth belong.
Short grace was given the dying man,
E’er led to the fatal tree,
And short the grace to our starving hosts,
Since the murder of David Creigh.

The beast of the desert shields its young,
With an instinct fierce and wild,
And lives there a man with the heart of a man
Who would not defend his child?
So woe to those who call evil good–
That woe shall not come to me–
War hath no record of fouler deed
than the murder of David Creigh.

Cartoon and newspaper article from the 1950’s about Creigh:

9 thoughts on “The hanging of David Creigh”