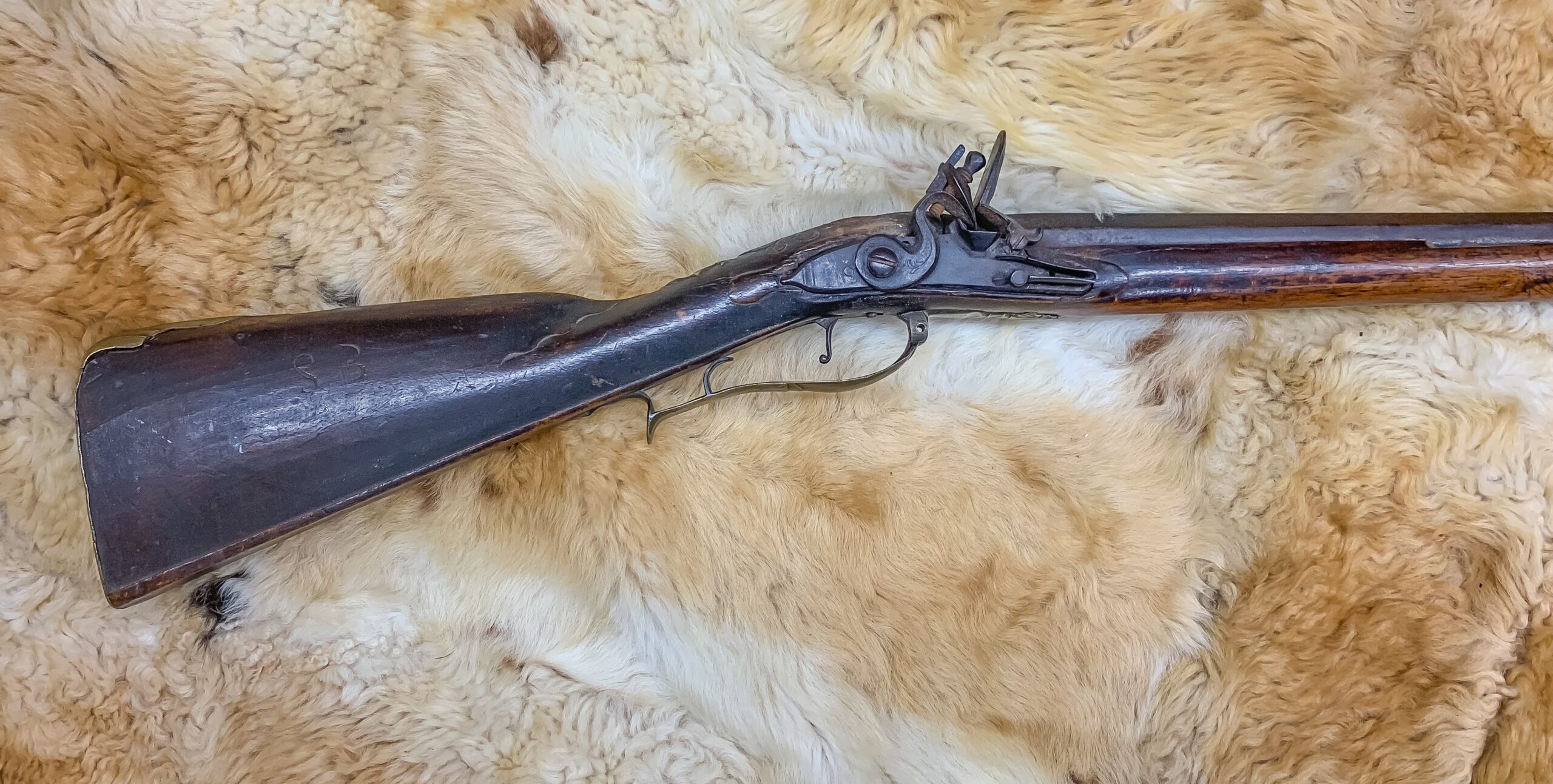 When the first settlers came into the Greenbrier Valley in the 1750’s, this is likely the type of firearm they brought with them. A civilian owned smoothbore fowler. This longarm is exactly 6 feet in overall length. It has a bore of exactly .70 caliber. It could fire a solid round lead ball. Or it could fire a group of shot, like a shotgun. Or, it could fire something in between, generally known as “buck and ball,” which is a mix of smaller and larger shot. It was a do-it-all versatile weapon. You could kill small game; woodland bison; or people.

Though we generally associate flintlock rifles with the early frontiersmen, we have very few, if any, examples of rifles early enough to have been in the Virginia colony, or elsewhere in the colonies, as early as the 1740’s and the beginning of the 1750’s. German Jaegers started coming over beginning in that period, and German gunmakers who came with them began the transition of creating the American Longrifle.

But we weren’t quite there yet. Short of certain exceptions which certainly existed, this type of gun probably would have been what you generally would have seen on the early Virginia frontier. I did see an account of a complete German Jaeger being found in an Indian grave in Pennsylvania during some archaeological excavation. So they were around. But there was a problem with the available gunpowder and the short barreled German rifles. They didn’t work well with the low quality available powder in the colonies. The German short barreled rifles were used to having excellent Swiss gunpowder. A change was needed here: longer barrels.

Joseph Swope, when he hid from the Indians in a hollow tree on the bank of Wolf Creek, Greenbrier Valley, in 1751, he likely had a Germanic style weapon such as this. Or, when Baughman Fort at the mouth of Wolf Creek, was infiltrated by Indians, who massacred all the occupants but one little girl, this is the type of weapon which was likely used in its defense. Here’s a pic of the little valley where Swope hid from the Indians, and then later built his cabin (which are only about 20 yards apart). Towards the end of the valley, where the large mountain can be seen in the far distance, is the spot where Baughmann’s fort was located.

Or, when Andrew Lewis and his father first discovered the Lewis Spring in 1751, this may have been the weapon of choice. Here’s a video we did on the actual spring location:

This gun obviously had a long working life, and definitely was not a wall hanger.

The fact that this very long gun has a sling swivel on the barrel, and a hole for a sling swivel in the trigger guard, strongly suggest military service. Also, the crudely carved initials, “SB,” on the buttstock, also is something you commonly see on weapons used in the 18th century American wars.

It is an ideal example of what you would have seen ranging the frontier, and leaning against cabin walls in early forts, such as Fort Pitt. Maybe it was with Washington at Fort Necessity, or at Braddock’s defeat. You never know, but it’s fun to hold a gun like this and let your imagination run…..

It’s a good indication on 18th century flintlocks that, if there is, or was, a swing swivel, then it may have seen (or been meant for) military use. Sling swivels would have allowed for the use of a sling, or shoulder strap, to carry the weapon at times slung over your shoulder, or on your back.

It has early examples of unique relief carving on the cheek rest side of the buttstock.

This is probably a fairly expensive and high quality frontier piece, compared with lower budget options available at the time. Remember, the militia laws REQUIRED that all men possess their own long gun, along with necessary accoutrements, and sufficient lead and powder, for use in the militia. These were not provided by the government. There were certain public stores of equipment, which were loaned out to those who couldn’t afford their own arms. Many other early weapons, if not most, would have lacked the relief carving, and other decoration, and probably would have looked more like this musket, which saw action in the 1774 Battle of Point Pleasant, and probably the French Indian War before that, and was used by the McBride family who lived on the fringes of the Virginia frontier:

Or, we can look at what an early Virginia frontiersman’s rifle actually would have looked like, though this is likely somewhat later. Large bore. Maybe some carving. Beat to hell:

Or a good example of an early frontier rifle would be the RCA No. 19 gun, which I’ve posted on before. Though this is actually a smoothbore, or a “smooth rifle,” it has a sister gun which is almost identical, and does have rifling. This would probably date to the early 1750’s, and would be a realistic design you would see give or take a few years on either side of that range.

What about hunting bags and powder horns? Probably not something far off from what you see assembled here, with the RCA 19 gun.

17 thoughts on “The flintlock the early Virginia frontiersman likely would have carried.”