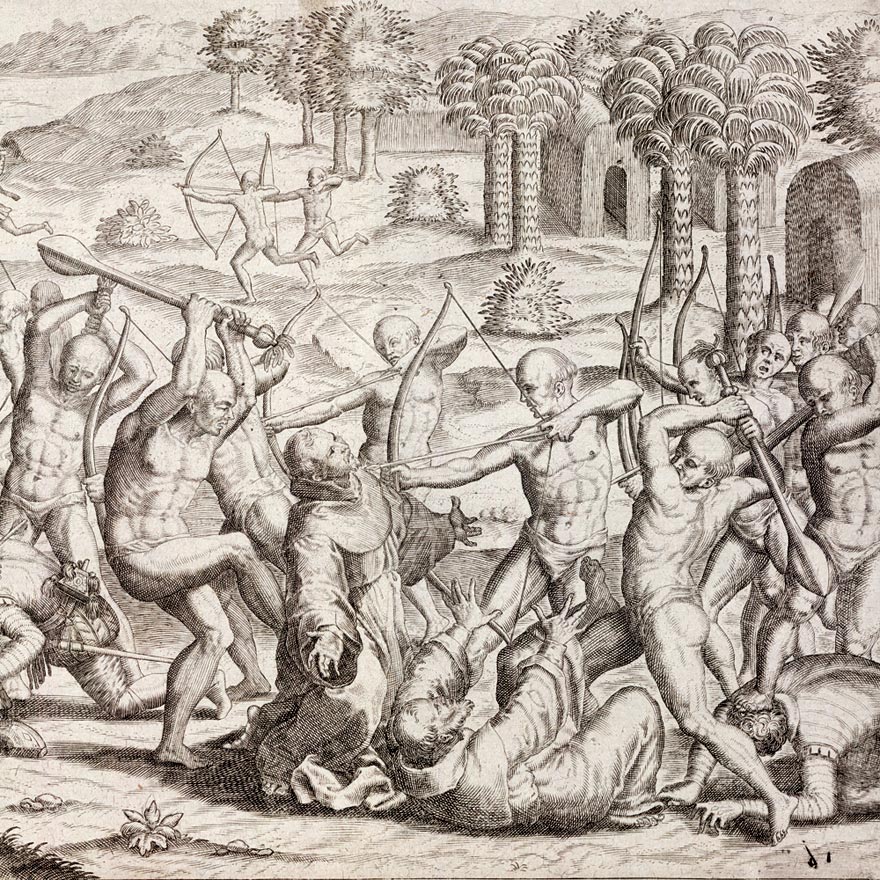 Today would not be Thanksgiving if Virginia history got its due. Americans would be feasting on Dec. 4. That’s the date our colonists declared an annual day of thanks in 1619 – nearly a year before the first pilgrim placed a toe on Plymouth Rock.

So why do those starched collars in Massachusetts get all the credit? Because our colonists ate theirs. Literally. The starch from their collars, shoe leather, rats, dogs, cats and whatever else they could choke into their starving bodies. When nothing else was left, they even ate each other.

In other words, our story isn’t as pretty as the pilgrims’.

Evidence of the colony’s horrors fills the Jamestown “vault” – a storage and laboratory facility housing more than 2 million artifacts. While tourists get a more palatable taste of the past at the re-created Jamestown Settlement nearby, archaeologists have been digging for 22 years at the site of the original fort . . . .

Particularly fruitful: a string of 400-year-old wells, each abandoned and a replacement dug as silt or saltwater intruded. Their deepest layers hold everyday litter. Above that lies a thick band of rubbish covered with dirt – part of a fortwide cleanup undertaken in June 1610 after the winter known as “The Starving Time,” when 80 percent of the roughly 300 settlers died.

We have some artifacts in the Scavengeology Museum, which came from the Jamestown settlement:

Winter closed in with the fort under siege and more hungry colonists arriving. Desperation begins to show up in the archaeological record: Bones from vermin and other not normally eaten creatures, including horses. And the remains of a 14-year-old girl, butchered after death so others could live.

One well layer dated to early 1610 reveals a temporary reprieve that rewrites a bit of the saga: 70,000 oyster shells. They were analyzed by an expert, who determined they were collected from the middle of Hampton Roads harbor in the spring.

That was around the time another batch of colonists arrived: shipwreck survivors who finally made it from Bermuda on May 23, 1610. History has always had them showing up with few provisions, more burden for the 60 skeletal souls who’d made it through the winter. Curators now believe the ship stopped off first at Fort Algernon – a tiny outpost near today’s Fort Monroe – where its passengers learned what awaited up the James River. “So they went out into the harbor, picked up oysters and brought them to Jamestown,” Bassett says. “They didn’t come empty-handed.”

The bounty didn’t last long. Within two weeks, the colonists were packing up to abandon the ruins of Jamestown. On June 8, 1610, a supply convoy carrying Lord De La Warr met their ships in the river. He ordered a turnaround and the housecleaning that turned the old wells into a treasure trove for today’s archaeologists. Kitchen vessels unearthed from the years right after show a gradual increase in size.

“That’s a sign they’re here to stay,” Outlaw says. “Instead of everyone just looking out for themselves, they’re thinking communally, feeding bigger groups.”

By Dec. 4, 1619 – when that real first Thanksgiving was declared – the Virginia Colony had expanded well beyond the fort. The annual observation was called for by new arrivals at Berkeley Hundred, a settlement 20 miles upstream from Jamestown, who proclaimed “this day of our ship’s arrival … shall be yearly and perpetually kept holy as a day of thanksgiving to Almighty God.”

The Berkeley site settlers had been given instructions from the London Company, including as follows:

“We ordaine that this day of our ships arrival, at the place assigned for plantacon, in the land of Virginia, shall be yearly and perpetually kept holy as a day of Thanksgiving to Almighty God.”

Only about two years after the first Thanksgiving in Virginia, things had been going well, and the settlers constructed what was the first iron forge in America, at Falling Creek. Only one year after that, with Powhatan dead, his son ordered a coordinated attack, which killed hundreds of settlers, and which destroyed the forge. This “Partisan Sword” was found at the site in the 1960’s. The iron content was tested, showing that the iron ore used in the weapon is consistent with the iron ore of the Falling Creek area, thus indicating that it was produced there between 1621, and the 1622 massacre.

Maybe history is written by the victor, and the New England colonies were much better situated to celebrate their version of Thanksgiving. In fact, 20th century research regarding this 1622 attack on the early Virginians is the reason this first Thanksgiving celebration was ever discovered by modern day historians:

309 years after the 1622 battle with the Powhatans, Berkeley Plantation’s missing history was rediscovered. In 1931, retired William & Mary President (and son of President John Tyler) Dr. Lyon G. Tyler was working on a book about early Virginia history. While doing research, he stumbled upon the Nibley Papers, documents and records taken by John Smyth of Nibley, Gloucestershire, about the 1619 settlement of Berkeley. Originally published by the New York State Library in 1899, the papers’ historical significance had gone undetected.

According to Virginia historians, the papers are concrete proof that the New World’s “day of Thanksgiving” originated in their region. Upon his discovery, Tyler told Malcolm Jamieson, who had inherited Berkeley plantation in the 1920s. The plantation was already considered one of the more historic homes in the state, once a residence to a signer of the Declaration of Independence, as well as the birthplace of a US President. Now, it had another feather in its historic hat. Jamieson, with the help of descendants of Captain Woodlief, instituted the first Virginia Thanksgiving Festival in 1958. Its been celebrated ever since.

The First Thanksgiving Took Place in Virginia, not Massachusetts, The Washingtonian, by Matt Blitz, November 18, 2015.

This wasn’t necessarily an easy sell to New Englanders, but nevertheless, it has been officially acknowledged by at least two U.S. Presidents:

In Kennedy’s 1963 Thanksgiving Proclamation (made 17 days before his assassination), the president acknowledged Virginia’s claim, saying “Over three centuries ago, our forefathers in Virginia and in Massachusetts, far from home in a lonely wilderness, set aside a time of thanksgiving.”

In 2007, President George W. Bush also noted the history while visiting Berkeley Plantation, commenting that, “The good folks here say that the founders of Berkeley held their celebration before the Pilgrims had even left port. As you can imagine, this version of events is not very popular up north.”

In any event, the massacre of 1622 put an abrupt end to the annual tradition of Thanksgiving by the Jamestown settlers, because the Berkeley plantation contingent who had arrived in 1619, and started the tradition, was completely wiped out. It would not resume until 1958, when the tradition’s rediscovery sparked a 20th century observance. And of course, a renewed rivalry with New England. And by the way, this is a great book on the Jamestown settlement, and the origins of America, if you haven’t read it yet: