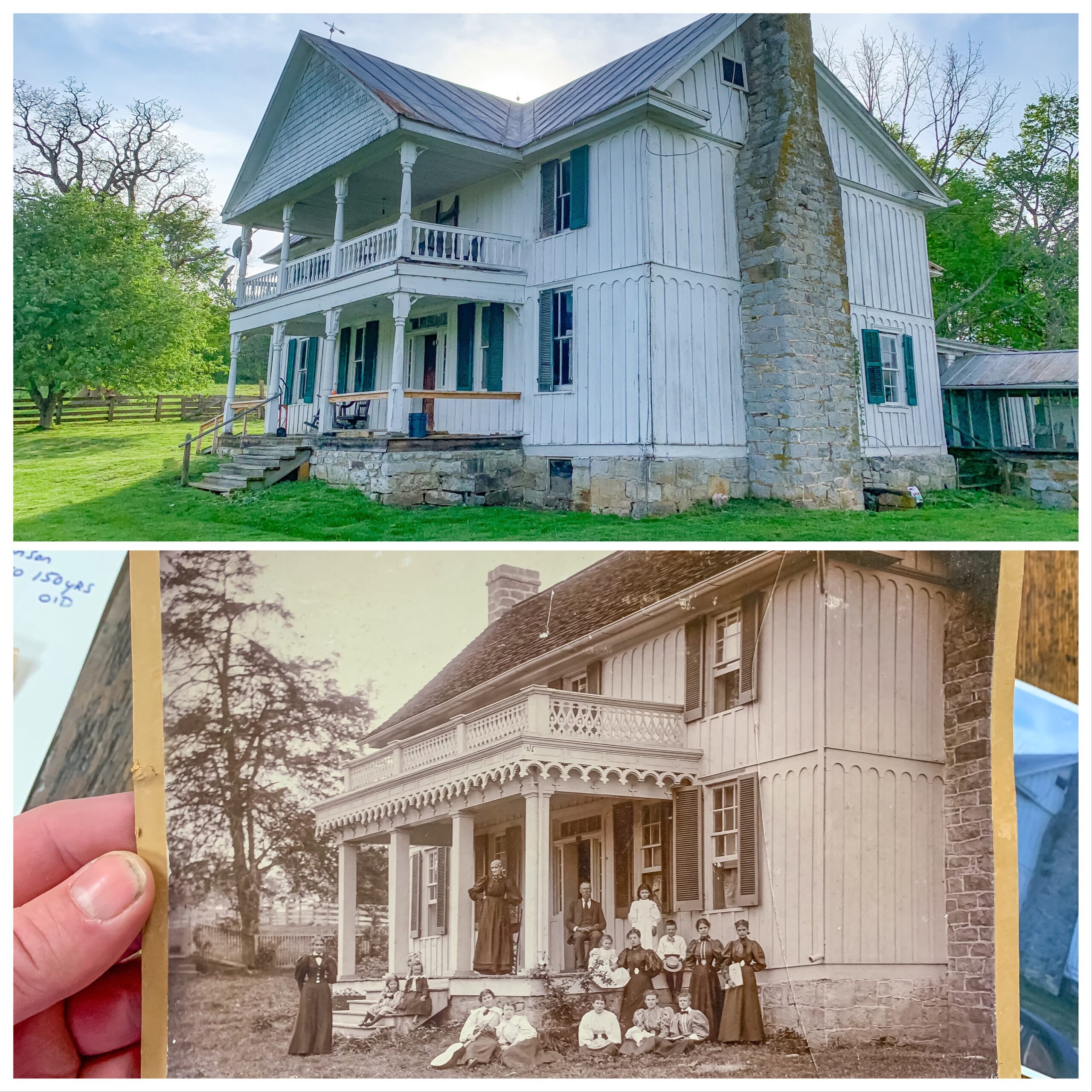 In the past couple of months there’s been a lot of progress on restoration of “our fort,” – Byrnside’s Fort, which is technically inside the larger home of Willowbrook. We temporarily stopped interior work in an attempt to get the outside painted and sealed before winter.

Most of our followers will be happy to see that the satellite dishes are now gone . . . .

Here is the freshly painted first floor front porch. We also replaced a a few of the broken and cracked window panes. This is prior to the shutters going back on. So now, there would be a shutter on the window to the right in the photo below.

Below, is a photo from yesterday, showing the legendary hole where so many finds have been found. You can also faintly see the progress to sealing and painting the roof. We still need to find replacement shutters for that one side window you can see below, which still has an original 6 over 6 handmade window frame, with old glass.

Below is the view from inside the fort, looking out the front left (if you’re facing the house) second story windows, looking towards Peters Mountain in the distance. This view probably hasn’t changed a whole lot in a long time.

Below shows our last excavation in the “money pit,” with numerous animal bones, some forged iron stuff, and quite an array of colorful 18th and early 19th century ceramic shards. It’s hard to believe that there’s still stuff in there. This is why I’ve left it open, and why we’re probably going to have to build a sifter to make sure that we’ve gotten everything out and documented.

Below shows the front of the house, as it was being painted. Those darn satellite dishes were still on at this point. There’s all kinds of chemistry going on with the roof, as we’re following step-by-step instructions on how to perfectly seal and preserve it.

It’s hard to miss where I stopped on the painting of the fence….

Many of the original shutters have been reinstalled. They took several months alone of time for a carpenter to restore and paint.

The board and baton siding, repainted, with shutters back on. The old weatherboarding is impressive. Except for the very back side of the house, not one bit of it has had to be replaced. Impressive product, which I presume was probably chestnut. Now replacement boards available are essentially white pine, or white pine.

Shutters back on on the rear extension of the house, and some of the wood on the soffet replaced.

There has been a lot of wood to paint, and some of it close to 40 feet off the ground.

Some more of the painting detail. That missing glass pane in the original 6 over 6 handmade window is being replaced today, hopefully.

The Eastern porch. Some of the screened porch, which we removed, still needs to be taken down.

Some of the detail on the board and baton. From the inside, since we’ve removed the plaster, where’s there’s missing chinking between the logs, you can see the inside of these weatherboards, and they’re perfectly dry and dusty. Never seen a drop of moisture since the day they were installed – even on this corner, which gets the biggest pounding from the summer sun.

Our two biggest fur babies at the fort.

Our friends Jim and Suzy Webb, visiting the fort the other day.

4 thoughts on “Restoration Progress on Byrnside’s Fort, a.k.a. Willowbrook”