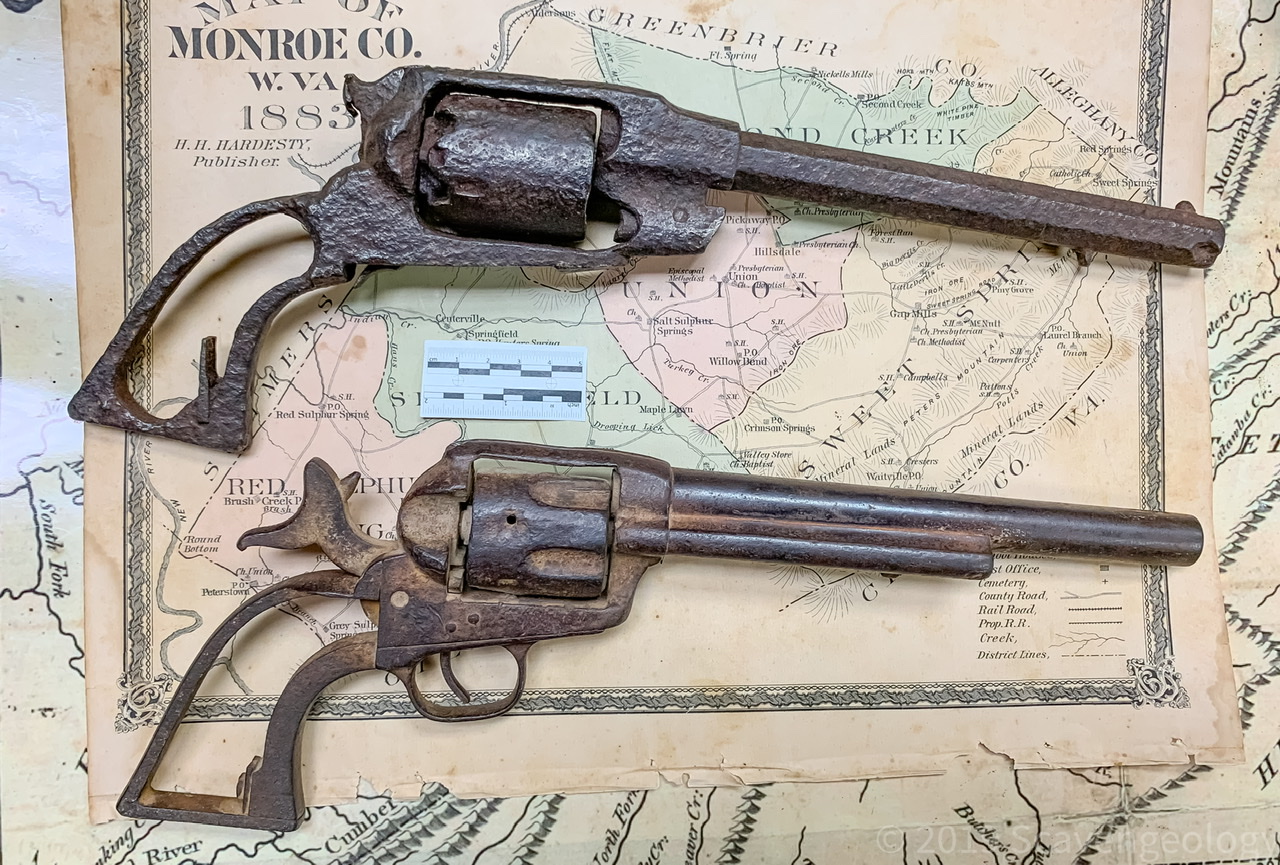 Here is a set of three different revolvers, in relic condition, which have been scavenged from the ground in some pretty interesting places. This first one is a Colt Single Action Army, which was dug in Montana, about 13 miles from the site of the Battle of Little Bighorn, where Custer and his army were famously annihilated.

It appears as if maybe the revolver suffered a catastrophic failure.

The markings on the pistol are still partially legible. However, this also proves that this Colt can’t have been involved in the battle, since its serial number is traceable to manufacturing just after the battle at the Little Bighorn occurred. Colt Single Action Army revolvers were state of the art at the time, and they were indeed issued to Custer’s 7th Cavalry, but they would have to be between the serial numbers of 4500 to 7527. Who knows under what circumstances this revolver ended up at that spot. Possibly some early Wild West drama ensued there.

Here are two separate .44 caliber Remington Army revolvers, found in separate places. Many of these were issued to Union Army officers, after widespread production began in 1861. They also were widely used in the “Wild West,” including by Buffalo Bill Cody. The one on top was found near the site of the Battle of Natural Bridge, a Civil War battle in Florida. The lower one was found in the Ohio River, probably lost during the Civil War also.

Found near the site of the Battle of Natural Bridge, in Florida.

Many people don’t realize that Florida was the only state capitol which the North failed to capture. This battle was the reason. The Battle of Natural Bridge was fought during the American Civil War in what is now Woodville, Florida near Tallahassee on March 6, 1865. A small band of Confederate troops and volunteers, mostly composed of teenagers from the nearby Florida Military and Collegiate Institute that would later become Florida State University, and the elderly, protected by breastworks, prevented a detachment of United States Colored Troops from crossing the Natural Bridge on the St. Marks River.

The Natural Bridge is a one-quarter mile long stretch along which the St. Marks River runs underground, after dropping into a sinkhole.[1] This action prevented the Union Army from capturing the Florida capital and made Tallahassee the only Confederate capital east of the Mississippi River not to be captured by Union forces during the war. The battle has been described as the last Confederate victory in the American Civil War, and it was the second largest American Civil War battle in Florida.

I found an interesting article on other artifacts found at this battle site, including one other revolver. The link has photos of the revolver, as well as all of the other items. One such item is a boot heel with a star design, much like the one I found at the site of Arbuckle’s Fort (which had a heart):

Handguns were issued by the Federal Government for the officers, a total number “just fewer than 400,000” (Shaw 2003:242). The primary issuer of the handguns was from the Colt Patent Firearms Company. The Colt Model 1860 Army revolver was the most widely used firearm of the American Civil War. It was a .44 caliber muzzle-loaded revolver that was accurate up to about 100 yards.

The government also employed the handguns of Starr Arms Company, Whitney Arms Company, and Savage Navy. There were some foreign designs of pistols, but they were much more rare. Also present were civilian handguns the soldiers brought from home….

Note that this Remington is a black powder revolver, whereas the first revolver, a Colt Single Action, was newer technology, and was not.

This Remington revolver was found in the Ohio River.