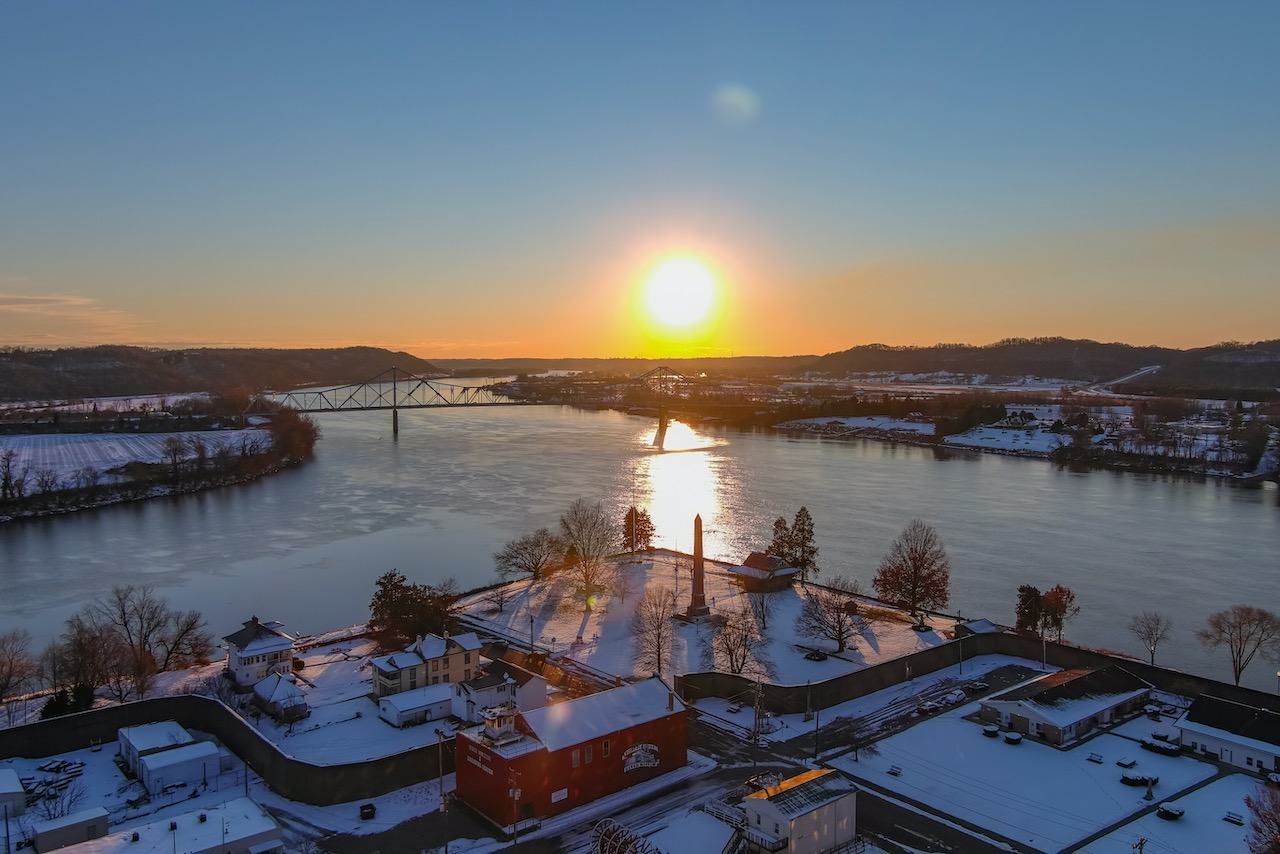 On the evening of Friday, January 24, 2022, I flew my drone over Point Pleasant, West Virginia. The setting sun appeared to be shining a spotlight on the old battleground from Lord Dunmore’s War in 1774. From this angle you get a great view of the perspective of the battlefield. General Lewis’s army was camped right here at the point. However, the battle itself took place throughout what is modern-day Point Pleasant. There’s a lot of history buried on this little stretch of ground….

Early on the morning of Monday, October 10, 1774, a clear, autumn day, two soldiers left camp and proceeded up the river in quest of deer. When they had gone about two miles, they unexpectedly came in sight of a large number of Indians, who fired on the hunters and killed one of them. The other escaped unhurt and ran swiftly back to camp to warn the army. The news was confirmed almost immediately by several others, and a general call to arms was sounded. “Colo A. Lewis ordered 300 Men from the two Lines of Augusta & Botetourt Forces to go in Quest of the Enemy, little Imagining as we afterwards found it to be the Case that we were to engage the whole United Force of the Enemy Ohio Indians. we Marched from Camp in two lines,” Col. Charles Lewis advancing with 150 men along the foot of the hills on the right, and Col. Fleming leading a like force along the bank of the Ohio on the left. “about 3/4 of a mile from Camp, the Indians began the attack on the right & in a Second of time the Left line was Attacked.”

Here I measured roughly 3/4 of a mile from where we know at least the main part of the camp was located (there is a monument in the modern-day park where the officers’s bodies are buried, which was inside the camp’s powder magazine), which reveals the approximate location where the Indians first opened up their fire at the advancing Virginians:

So it was roughly here, at modern-day 11th Street, where the battle first kicked off, with the Indians ambushing Col. Charles Lewis and his men at the base of the foothills, probably this very spot, and a “second” later, also ambushing Col. Fleming and his men walkup up the bank of the Ohio a few hundred yards away.

The line between the two armies was roughly modern-day 6th Street, which is just south of the bridge in the distance. If you can see the McDonald’s sign at center right, that’s about on 6th street. So imagine a line running across from there to the Ohio river, at left. The train trestle in the distance crosses at 7th street, so the battle line as exactly one block closer.

On the ground, looking from 6th street towards the point, here’s the modern-day view. I actually took this photo on October 4, 2020, about six days before the October 10 anniversary of the battle. Here we would be looking toward the Virginians:

The troops were met by a withering fire from the Indians, who had taken positions behind a rude breastwork of trees, old logs, and bushes. Col. Charles Lewis fell mortally wounded at the first onslaught, and shortly afterwards Fleming was seriously hurt, so that both lines gave way and were falling back on the camp when they were met by Col. Field with reinforcements. The whites rallied and the engagement became general, with furious fighting on all sides. “Never did Indians stick closer to it, nor behave bolder.” They formed a line across the peninsula from the Ohio to the Kanawha and cut off any possibility of retreat for the Virginians. “The Engagement lasted from half an hour after sunrise, to the same time before Sunset,” when Lewis ordered three companies to go up the river in the shelter of the high bank and undergrowth to fire on the Indians from the rear. The Shawnees thought they were being attacked by Col. Christian’s fresh troops, broke, and fled across the Ohio under cover of darkness, and went on back to their villages on the Scioto. Christian heard the firing and hurried his advance, but did not arrive on the scene until midnight, when all was over and there was silence except for the groans of the wounded.

The Battle was a bloody one. Of the whites, eighty-one were killed or mortally wounded, including Col. Charles Lewis, Col. Field, and four captains; 140 were severely or slightly wounded, among them Col. Fleming and three captains. The loss of the enemy could not be ascertained exactly because they always carried off or concealed some of their dead, and in this case threw many into the river. Twenty scalps were procured from the battlefield, and in addition eighty blankets, forty guns, and a large number of tomahawks. Fleming said, “I believe the Indians never had such a Scourging from the English before.” Of the three trained physicians with Lewis’ Army, one (McClennahan) was killed, and the other two (Fleming and Buford) were wounded. This must have left the wounded in a desperate state, and there is mention of a lack of medicines besides this shortage of doctors to administer them.

The location of the main battle line at 6th Street is also the same spot where Cornstalk was originally buried, right at about where this historical marker is now located, on the lawn of the courthouse.

Cornstalk was later reinterred on the point itself, where a marker now stands in the modern-day park.