View cart “Ken Hamilton Spontoon Tomahawk” has been added to your cart.

This is a copper crucifix rosary pendant produced in Europe and given away at missions as “souvenirs.” It was dug at a village site in the Great Lakes region, and presumably came from a Canadian mission working among Native Americans. It’s pretty small and appears to have been meant as a memento to be worn with a necklace. It states INRI on the front, and on the back says “souvenir de mission.” INRI stands for the Latin phrase Iēsus Nazarēnus, Rēx Iūdaeōrum which means “Jesus the Nazarene, King of the Jews.” I really don’t know the age, as I haven’t been able to identify another one like it. It definitely spent a good amount of time in the ground.

Here’s an almost identical one which was excavated at the site of Fort Clark: 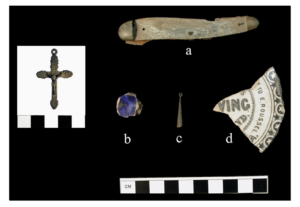