This is an exact replica of an 18th century British trade scalping knife, copied from an example found at the historic Grand Portage site by master trade knife craftsman and expert, Ken Hamilton. Every detail of the originals is the same.

The relic example  is not included. 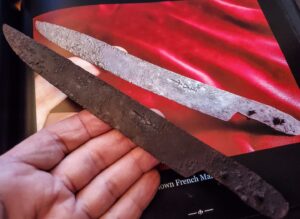 Here’s a more detailed blog post we wrote on Native American trade “scalping knives,” as they were called at the time: https://scavengeology.com/native-american-scalping-knives-the-truth-the-fiction-the-business-the-blood-history/

Beginning in the 17th century Grand Portage became a major center of the fur trade. See Canadian Canoe Routes (early). It was at the point where a major canoe fur trade route of the voyageurs left the great lakes. It was so named because the route began with a huge 9 mile portage.[3] A portage is a place where the canoes and equipment are carried over land. The French established this trade with the Native Americans until the British took it over in the 18th century after the Seven Years’ War. The North West Company established the area as its regional headquarters. Soon Grand Portage became one of Britain’s four main fur trading posts, along with Niagara, Detroit, and Michilimackinac.[4] Even after the American Revolutionary War and victory by the rebellious colonists, the British continued to operate in the area. Under the Treaty of Paris in 1783, Britain had to cede former territory to the United States, including this area.

Finally with the signing of the Jay Treaty in 1796 defining the northern border between Canada and the US, British traders planned to move from Grand Portage. They wanted to avoid the taxes the US put on their operations, in its effort to encourage American traders instead. In 1802 the traders planned to move north to create a new center, what they called Fort William. In 1803 following the Louisiana Purchase, in which the U.S. acquired the lands to the west of Grand Portage, the British finally moved from Grand Portage to the new post in Canada.[5] The North West Company moved its headquarters northward to what they named Fort William. After British fur traders abandoned the area, it rapidly declined economically until fisheries and logging became popular in the 19th century.

There is some evidence that traders were passing across the Grand Portage in 1765, heading to Lake Winnipeg and other regions. Along the way they were impeded by Indians who wanted a share of the goods they were carrying. Benjamin and Joseph Frobisher describe the activities of traders in relation to the region west of Lake Superior in the 1760s:

The first adventurer went from Michilimakinak in the year 1765. The Indians of Lake La Pluye having then been long destitute of Goods, stop’t and plundered his Canoes, and would not suffer him to proceed further. He attempted it again the year following, and met with the same bad Fortune. Another attempt was made in the year 1767; they left Goods at Lake Pluye to be traded with the Natives, who permitted them to proceed with the remainder; and the Canoes penetrated beyond Lake Ouinipique (Wallace 1934: 70).

These events are not mentioned in Alexander Henry’s narrative or in other sources describing this time period. This account makes clear one of the problems that traders faced in this period. Many wished to trade in the region beyond Grand Portage. To do so they needed the permission and support of the people in the region who were themselves intent on seeing traders, not passing through their country to go beyond, but remaining to trade in the region. The people who lived at Grand Portage and in the area west to Rainy Lake, under the leadership of people such as the Premier and the Crane, in effect, controlled a gateway. To get beyond, it was necessary to deal with them, one way or another. Their power, however, may have been a motive for continuing obstacles to loosening governmental regulation of trade.