This flintlock rifle came out of a farmhouse located in Pickaway, Monroe County, West Virginia. Unfortunately there’s no good signature on the barrel, just two script letters, which may have been initials of the owner. It may actually be a member of the Cantley family, who owned the Honaker rifle it was paired with, who lived in Raleigh and Fayette Counties, West Virginia.

I believe this could have been made by Jacob Shaffer (1783-1874), who lived mist of his life in Wythe County, VA. He was born in Shenandoah County, but apparently moved to Wythe County as a young boy.  In his career as a gunsmith, some of his rifles were of a plain mountain style, such as this one, and some of them were very well decorated with silver inlays. All of his rifles however, were known to be accurate. He would sight his rifles in by taking a 200 yard shot at a large sand stone still sitting in the same location.

Despite looking very much like a Wythe County, Virginia Shaffer rifle, it also looks very much like the West Virginia rifles made by Honaker and Carper. I believe they were all influenced by, or trained by, the Honaker patriarch gunsmith Abraham Honaker.  I’ve heard local Virginia collectors, who have studied these rifles, refer to them categorically as “Shonakers,” mixing Shaffer and Honaker, and implying that they are of a commingled style so much that it can be close to impossible to differentiate them. 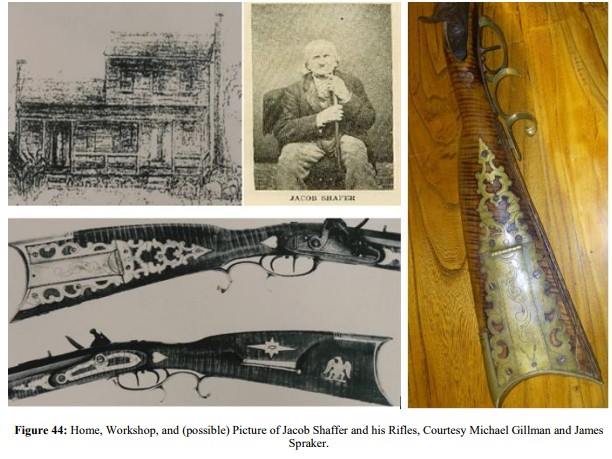 This flintlock rifle was likely made in the percussion period, so post 1840 or so, but was made as a flintlock nevertheless.  The likely reason for that is because people in the mountains still preferred flintlocks in many cases. It’s about a .45 caliber, and would have been good for both deer and small game. As is the case with many southern mountain rifles, it could have seen use in the Civil War as well. An unusual feature of this rifle is that instead of a patchbox, it has a cap-box with a lid, which is generally found on percussion muzzleloaders.  But I suppose it served the same purpose, and may have arguably been an improved design.  This is one of the features which shows it was made during the percussion period.  It was a modern style, using modern features, but retaining the tried and true flintlock action – which by then had been perfected as much as possible.

I also attached some pics of another Shaffer I found, along with what appears to be Shaffer’s powder horn. You can see the likeness of the trigger guard, ramrod entry pipe, and the carving. Great Virginia and West Virginia mountain life history.

I wonder who owns that powder horn and other rifle now….. I’d love to hear from you, if you have it.

ETA: That was fast.  The owner of the horn and rifle has been located.  Maybe I can add some more pics/info at some point….  Any other info is welcome as well.  Thanks – John

There are no reviews yet.

Be the first to review “Virginia Mountain Rifle found in a W. Va. Farmhouse” Cancel reply