This rare wristband, or armband, has a maker’s mark still visible, pictured above.  I haven’t made an ID yet on the maker.

Besides all the weapons, tools, and other practical objects traded to Indians, there was a long list of nonutilitarian objects traded to the Indians which includes beads, rings, bracelets, crosses, pendants, pins, brooches, gorgets, pipes, pipe toma- hawks and other items used for personal adornment or as status symbols. Decorative status objects such as gorgets, crosses, pins and pendants, medals, rings and earrings were usually made of silver but sometimes of pewter, brass or German silver. In the beginning, most of these items were made in Europe but as the east coast became colonized much of the silverwork was manufactured and decorated in Montreal or Detroit. 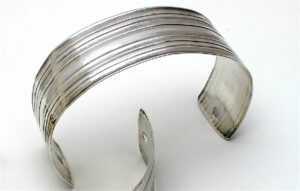 Also pictured here, just above, is a non-dug example in the Musee McCord (Montreal Social History Museum), by silversmith Robert Cruickshank, which I found on the Contemporary Maker’s blog, along with the following description:

Trade silver objects, like these wristbands, were produced by Europeans to distribute to Aboriginal people as gifts and in exchange for furs. Although Europeans tended to view trading as a strictly commercial enterprise, they recognized the need to respect Aboriginal protocol related to commerce, including ceremonial gift exchange. They began to produce silver ornaments – such as circular or “ring” brooches, large gorgets, and a range of arm and leg bands to supply the needs of merchants involved in the fur trade.

These silver wristbands carry a distinctive touchmark indicating that they were made by Robert Cruikshank (1743-1809), a Scottish silversmith who was present in Montreal as of 1773. The production of silver items for use in the fur trade was a major aspect of the production carried out in Robert Cruikshank’s workshop. An extraordinary number of trade silver pieces were produced there, based on various European prototypes and incorporating elements ranging from Masonic emblems to motifs drawn from Aboriginal cultures.

Items from the Musée McCord

The armbands and wristbands pictured in the Ohio Archaeology article show some more Cruickshank silver bands which look very close to this example. 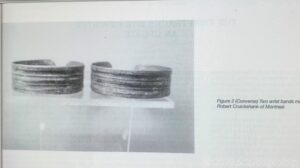 Not for sale at the current time.