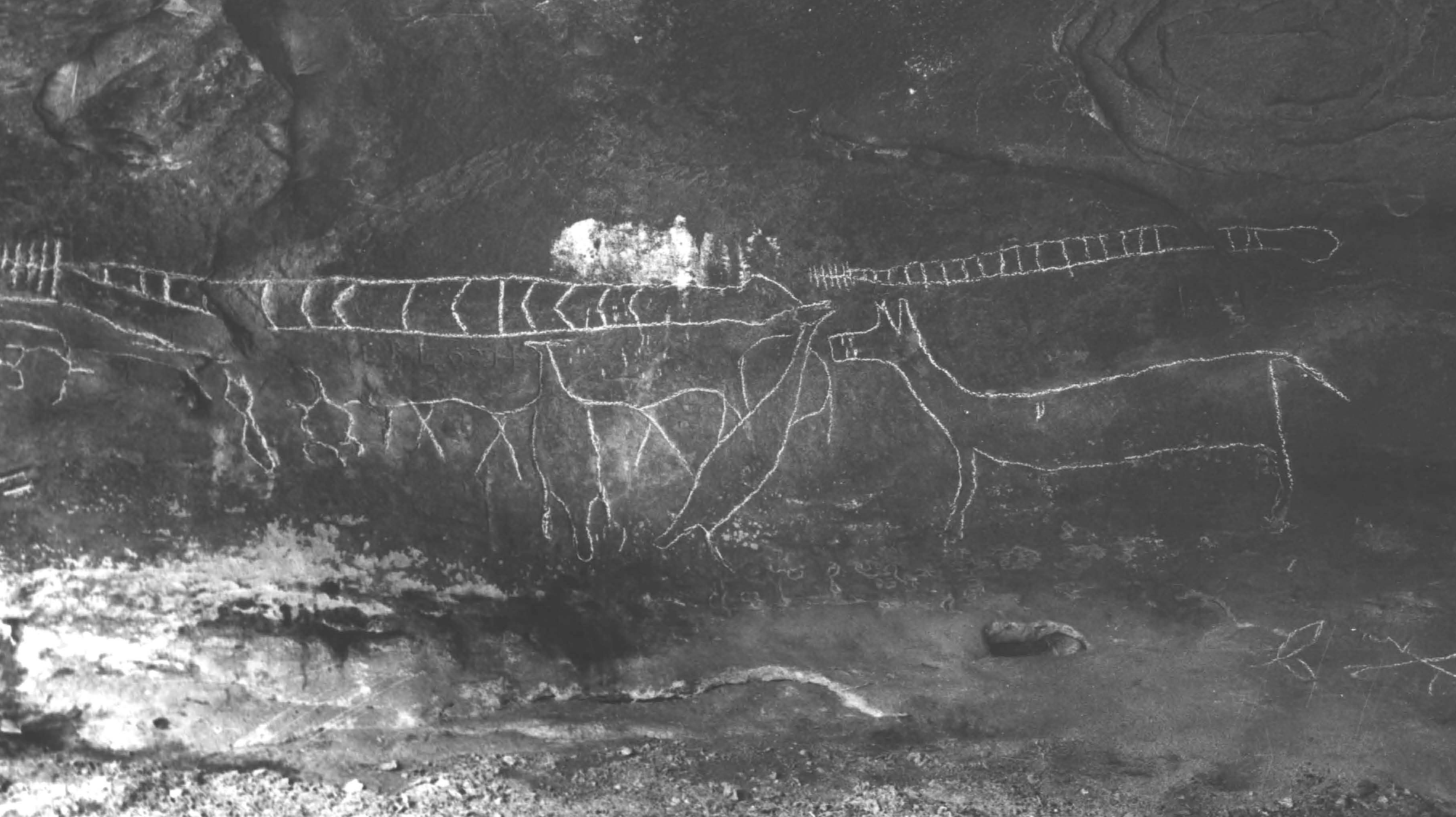 In Harrison County, West Virginia, there’s a cave, known as “Indian Cave,” which was explored in the 19th century, inside which there are some interesting petroglyphs, including depictions of figures such as rattlesnakes and fish. They’re even colored red using red ochre. They’re estimated to date to 500-1675 AD. It’s located “on the John McDonald farm, on the right-hand fork on the Two Lick,” if that makes any sense. I’m pretty sure this is an old pic of the outside. You see the words “petroglyph,” and “pictograph” used synonymously, but they’re actually two different things. a petroglyph is an image carved, incised or scratched into stone. A pictograph is a painting on stone, using natural pigments. Pictographs are typically found only in caves or other areas where they can be protected from the elements of sunshine, wind-blown sand and precipitation. It may be that there are both in this particular cave, from the description given.

From the NRHP information: The site of the Indian Cave Petroglyphs was first reported by W.H. Holmes of the Bureau of American Ethnology who visited there in 1889. He described the petroglyphs as occupying an area of twenty feet by four feet on the back wall of a rockshelter. The petroglyphs were described as being comprised of death heads, a human head or face, three cranes or turkeys, three mountain lions, two rattlesnakes, one turtle, a hand, a star, two tracks and a few undefinable characters. Holmes indicated that hematite had probably been used in many places on the petroglyphs but that it had weathered away except for traces in parts of a few figures.

Besides recording and drawing the petroglyphs, Holmes excavated the shelter. He uncovered hamerstones and small pieces of worked hematite that: were probably used in executing the petroglyphs. He also found pottery tempered with either shell or grit. The pottery indicates an occupation or occupations between A.D. 500 and A.D. 1675.

Garrick Mallery mentioned the petroglyphs in his Picture Writing of the American Indians in 1889. However, he merely quoted Holmes’ report and reproduced his drawings. In 1958, an account of this site was published by William E. Davies in Caverns of West Virginia. He described the cave as a “shelter, oval in shape, twenty feet wide and four to five feet high . . . on the walls are numerous pictographs . . . depicting turtles, foxes, rattlesnakes, birds, fish . . . .” He also noted that there was a human hand and that the drawings were tinted with barely discernable colors. Davies also published a drawing of the petroglyphs, including two human figures on the front of the cave above the entrance, which were mentioned but not drawn by Holmes. Davies’ drawings closely correspond to those Holmes had done 69 years earlier.

More recently, the site has been studied by James L. Swauger. In October 1970, he distinguished 26 designs inside the shelter corresponding t o those of Holmes, but he did not find the human figures at the shelter entrance. He also noted the presence of “red coloring matter” still preserved in some of the figures. Swauger characterized the designs as one star, three birds, one thunderbird, one human form, one human hand, four human heads, one human external female genitalia (which Holmes did not describe), two animals, two deer tracks, one panther, one 11U11-shaped track, two fish, two rattlesnakes, one turtle, one concentric circle and three abstract figures.

These petroglyphs are virtually unchanged today. Situated in the Dunkard Series Sandstone at an elevation of about 1200 feet, they appear from the pasture below to be only two boulders standing on the hillside.

The figures were executed by two methods. In one the figure was outlined
by grooves pecked and rubbed into the sandstone. The other method was by rubbing the surface so that the entire form of the figure was depressed. Red ochre or hematite was employed to delineate the life lines of two animals, and again upon parts of a face and a bird figure. The figures on the exterior of the shelter have been so severely weathered that they are barely and incompletely visible. All that can be observed now are a few meaningless lines. The figures within the dripline of the shelter are remarkably well preserved.

The Indian Cave Petroglyphs Site is fine example of gross Indian rock art. It is not certainly known which culture grooved and pecked the figures into the rock, precisely when they were made, or why they were made. It is supposed that they were made by Late Prehistoric peoples, but it is unknown whether they were carved for religious reasons, for communication or just as an expression of art.

The designs on this petroglyph are similar to many others in the upper Ohio Valley. Birds are a common motif in this area as are panthers, X-ray designs, deer tracks and human forms. The rattlesnake design is relatively rare, and the fish is a unique design among those petroglyphs studied in the upper Ohio Valley area. Also unique is the presence of traces of red ochre preserved in parts of several figures. The use of hematite or red ochre to outline features on a petroglyph may not have been an uncommon practice, but few such petroglyphs have been reported. The Indian Cave Site is one of only a few sites in the eastern United States where red pigment remains have been found associated with petroglyphs.

In 1890 W.H. Holmes stated that the Indian Cave Petroglyphs were “carefully elaborated and well preserved” (Holmes: 217). Since that time, others have remarked on the quality of the execution of the figures and the fact that traces of the red pigment have survived.

I wasn’t able to find any color photos.

Here’s an interesting article I found on “Pictographs of the North American Indians.” It mentions another West Virginia petroglyph:

The “Hamilton Picture Rock,” of which Figure 148 is an illustration. “The etchings are on a sandstone rock, on the Hamilton farm, 6 miles southeast from Morgantown, West Virginia. The turnpike passes over the south edge of the rock.”

It contains the following explanations:

We found a rock in our backyard that looks strikingly similar to “D.” I’ll have to find a pic of it…..

A few more I thought were interesting:

4 thoughts on “Petroglyphs in a West Virginia Cave”