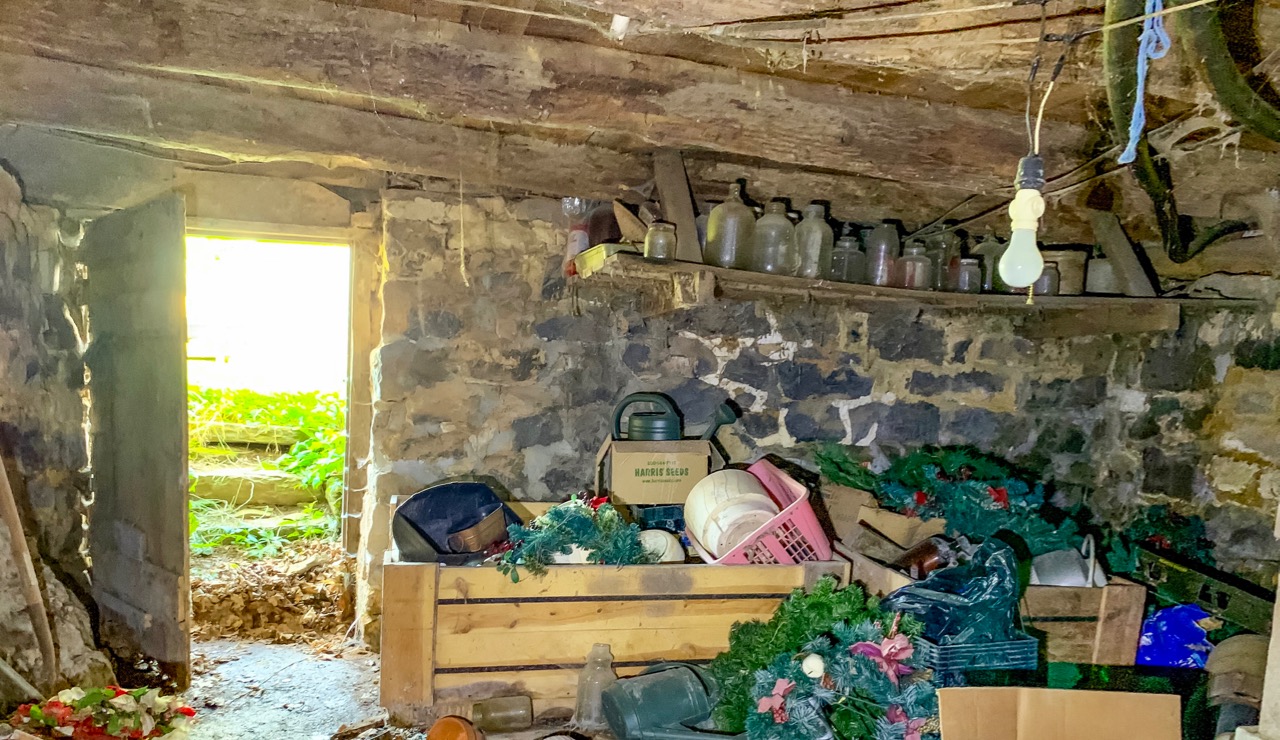 Fortunately, while in quarantine, I had some time to go looking, and I found my way to Richmond, Virginia and the James River School of stoneware pottery. As it turns out, though it’s technically unsigned, it’s pretty easily attributable (to the very trained eye and once you know where to look) to the Richmond, Virginia pottery studio of John P. Schermerhorn, and more specifically, Samuel Wilson, a potter who worked with/for him. This was a pottery studio owned by the non-potter entrepreneur, Benjamin Duval.

This was most likely made between 1814 and 1828, according to Curtis B. Rice, who literally wrote the book on James River Stoneware. He also said that jugs of this sort in the context of a rural plantation were meant to store any sort of liquid. Anything from brandy, liquor, molasses, etc. Since it was hidden in the basement, I’m going to presume it held rum or whiskey – somebody’s secret stash.

These James River area potters seem to have come from the Dutch-influenced Albany, New York area.

The now accurately identified Richmond potter John Poole Schermerhorn was a prolific and skilled artisan. Trained in a transplanted Germanic/Dutch stoneware tradition by early New York–New Jersey craftsmen, he successfully produced, marketed, and distributed his wares throughout eastern and central Virginia. As a result of business, family, and personal associations, Schermerhorn’s contribution to the history of ceramics in Virginia is a significant one. His association with Benjamin DuVal was fortuitous, as it provided an opportunity to test the Richmond-area market and participate in its ability to support and sustain an evolving pottery manufacturing concern involving not only Schermerhorn but, in all likelihood, many of his contemporaries and associates whose roles in this burgeoning industry are yet to be told.

Schermerhorn apparently enjoyed a particularly close association with many members of the local pottery community. Understanding these associations is helpful in characterizing the broader nature of the potters and potteries of the Richmond area.

His coincident arrival in Virginia with that of Samuel Wilson, for example, suggests a prior association in New York, since both had resided in the Albany area. This might reflect the close, enduring relationships between potters that often were established at a relatively young age, either as peers (coworkers) or as subordinates to mentors (apprentice, journeyman, master potter). Both Schermerhorn’s and Wilson’s training in the northern Germanic/Dutch-influenced stoneware tradition is strongly reflected in their early-nineteenth-century stoneware production in Richmond and, in fact, helped define and ultimately shape the nature of eastern Virginia stoneware.

With limited documentation of the potters working at the DuVal pottery factory, the assumption is that Schermerhorn, William Harwood, and/or Samuel Wilson were responsible for the production of those extant wares and waster sherds stamped “B. DuVal, Richmond Va.” That the vessel forms, maker’s mark, and decorative treatments represented in the recovered assemblage relates to early New York–New Jersey manufactured stoneware is without question.

The discovery of a few signed examples of wares produced by Schermerhorn at his own Richmond stoneware manufactory allows a definitive attribution to his pottery of other surviving wares with related form, decorative treatment, handle, capacity designation, color, rim configurations, and so forth. Initial examination of available wares by Schermerhorn resulted in the identification of two basic groups based on vessel form and, to some extent, intragroup similarities in decoration.

Another group of extant wares from the region are thought to be made either by Schermerhorn himself or with an associated potter at Rocketts, most likely Samuel Wilson. This third group (Group 3) is characterized by well-potted, wonderfully ovoid vessels with varying rim configurations, frequently the presence of one to three concentric incised lines at the vessel’s shoulder, and rather simplistic brushed blue cobalt decoration involving swags and tassels, simple petaled or bilateral leaved flowers, or large primitively composed animals, sometimes associated with a distinctive capacity stamp usually encircled by a toothed border or outline. This unusual capacity mark is often incorporated into the floral decoration as a blossom or flower. Representative forms include storage jars (figs. 42-46), including one ovoid jar with “Richmond” incised on its base, pitchers (figs. 47-49), and jugs (figs. 50-55).

The decorative treatments within this group are more minimal and less detailed than the flowing vines and flowers on Schermerhorn wares in Group 1, which appear to have been executed by the hands of an artist. Pieces have been collected in Richmond, as well as in Augusta, Botetourt, Buckingham, Dinwiddie, Montgomery, Rockbridge, and Rockingham counties.

Lo and behold, I also found that MESDA has a Samuel Wilson piece in their collection, and sure enough, it has the same design of gallon indicator.

MESDA’s Samuel Wilson pitcher. It has the identical “I” for 1 and the same border around the “I.”

So there, I finally found it. And while it’s not so old as to date to the fort occupation of the property, it does date to the Byrnside Family, and was likely purchased by John Byrnside, and used by him. Maybe he’s the one who hid it, and this is the first time anyone else has touched it……