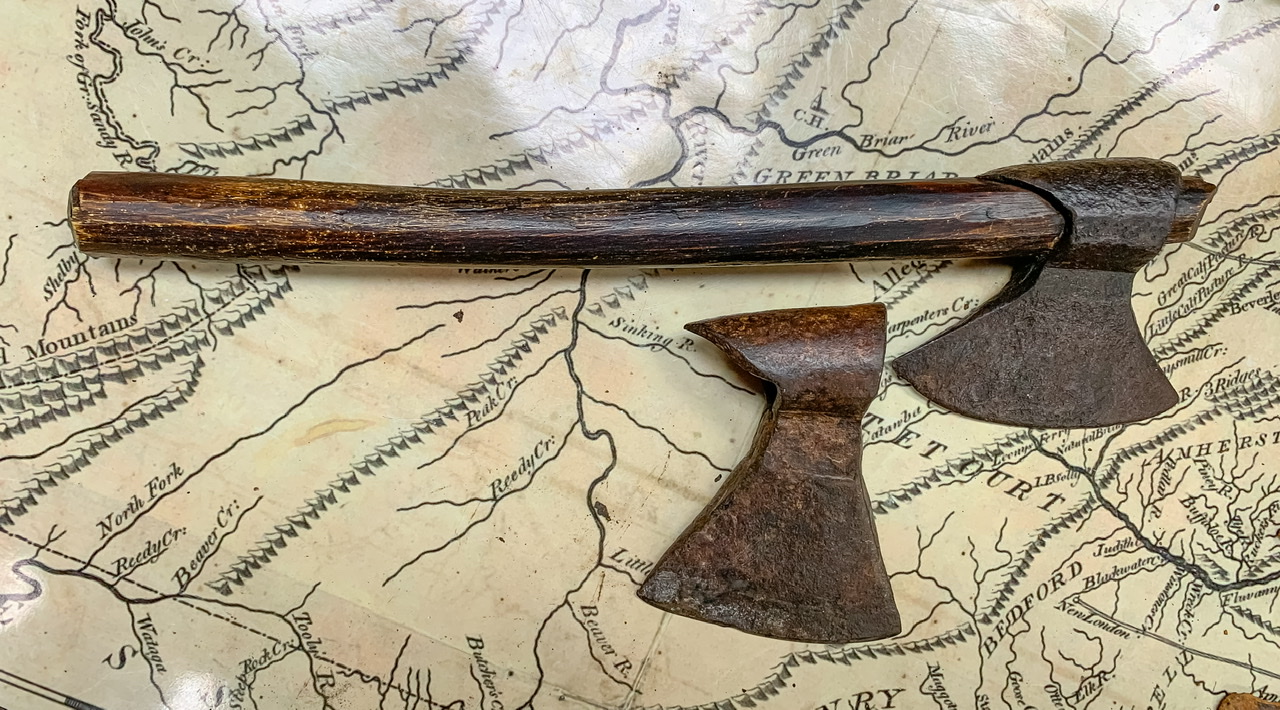 I found a very close version of our Jamestown belt axe / hatchet which I frequently discuss in posts. I had never seen another like it. We know that this one – with the replacement haft – was found near Forte Jamestown. Unfortunately the new one has no accompanying information showing where it was found, but there has to be a connection, in my eyes at least. It came out of a collection in New Jersey, is all I know. But take a look at how close it is to the Jamestown piece. It looks like the same guy made it.

These are both obviously blacksmith forged one-offs. Both have round polls of roughly the same size and have been folded into place by the blacksmith. These both have the same highly unusual lower reinforcement drop section on the bottom of the poll. I like to call this the Mullet-poll. Eric Ewing, if you happen to read this, for some bizarre reason, I had you in mind when I named that particular feature….

This is a medieval Old World design, often seen on Viking battle axes and their progeny. However, the legit Viking axes are usually much more elaborate and exact in design. But this style of poll reinforcement, coupled with a flared blade, fell out of style very, very early on – generally around the 17th century. Such a date approximation is consistent timing for the Jamestown period, in theory anyways. Or perhaps even consistent with pre-Jamestown trade as well, such as via the Spanish, or maybe even with the French, down through the Great Lakes.

We own some 17th century Jesuit artifacts excavated in Tidwater Virginia, and there’s a couple 17th century Jesuit rings in the collection of UNC, found in early historic era mound sites in North Carolina. Clearly these weren’t sourced from Jamestown, and we know that Spanish Jesuit priests made an unsuccessful foray into the Tidewater thirty years prior to Jamestown. And then there was the De Soto Expedition which came up into North Carolina, and vicinity. But that seems a little early. There was other Spanish activity as well, here and there, during the intervening period.

It had been my working theory that the Jamestown hatchet was just an English blacksmith trade hatchet for the local native trade, fairly roughly and quickly put together. But perhaps there’s some other explanation. If this new axe head were found by itself, it would be assumed it was a medieval european axe head. I certainly wouldn’t be willing to risk otherwise. But it’s almost identical to an axe we know was found in Virginia. It’s substantially thicker in the middle, slightly longer in blade, and the flares are slightly different, but overall, it’s very, very close.

I’ve searched axe heads actually excavated in Europe, and I’ve found some similar Viking era heads, but nothing anywhere near the comparison of these two. Spanish? Italian? Eastern European? I’ve searched them all. You do see the reinforced polls, but they tend to be somewhat flat, and they’re usually a “bearded” battle axe design, favored by the Vikings. This is an entirely different design. And really it’s not that far off from some of the other axe heads we know were excavated from Jamestown – though the available pics of those pieces are pathetic. If anyone has any better pics, I’d love to see them.

Note that these original Jamestown relics, excavated by the National Park Service in the 1950s, really aren’t that far off. There’s at least two very similar shaped flared blades. That flared blade one, and a couple of the others have a very similar reinforced poll section. They don’t come down to a point, but they may have at one time.

Note that some of the newer Jamestown finds, which came out of the treasure well (as in a water well full of artifacts), have some similarities. In the pic at left, there’s a broken hatchet which is obviously a double flared blade, and consistent in size with these small belt-sized axes. It’s possible it could have had a Poll-mullet and it the point broke off. At right is an adze – not a hatchet obviously – but take a look at the poll on the adze. Pretty similar reinforcement, just not pointed. There’s also a felling axe there, which has the side ears, as have been found on other Jamestown and early Virginia felling axes. It also has a flat poll.

This early trade axe was in a burial mound in Cherokee County, North Carolina. It’s in the collection at UNC, my alma-mater. I’m glad they haven’t decided to throw away this period of North Carolina history….

It isn’t very far off either, from our two Mullet-Hawks: Add a little flare to the top edge, and drop that poll down a little farther, and voila! Otherwise, it’s fairly consistent. The second is very much like the first, but at a better angle you clearly see the slight flare of the top edge, and a downward angle of the rear of the poll. Who was it that tried to lecture me that “no trade axe had an upward flaring blade?” These are extremely early trade axes, and notice they don’t appear to be Biscayne Axes, and instead appear to have round polls. And look how small the second one is.

In “Trade Axes as Weapons,” Mark Miller, the grouchy skeptic of the tomahawk world, discusses how little we know about the very early 17th century trade “hatchets.” He brings up this early illustration of the Tuscarora Tribe in 1711 North Carolina.

Take a look at the hatchets portrayed in the period artwork: one in the center and one towards the right. Both small pieces, double flared blades, and no visible poll protruding, consistent with what we have here. Mark notes:

Notice the 2 round eyed poll-less trade axes in the center and right side. Evidently they weren’t cutting trees with them here!

He’s referring to is the claim by many fur trade scholars, who contend that the commonly known early iron poll-less axes, were never used as weapons in significant numbers. Mark also writes that:

In 1650 Van der Donck of the New Netherlands colony writes: “At present they also use small axes (tomahawks) instead of their war-clubs.” Notice the tomahawks among the Dutch were clearly identified as small axes as evidenced by this particular description, not some new spiked or pipe version . . . .

In a separate list of Indian goods needed which was dated February 12, 1761, the famous British Indian agent Sir William Johnson makes a clear connection between the terminology of a plain (non-pipe) tomahawk and a small hatchet: “. . . Tomahawks or small hatchets well made . . . .”

The point being that small hatchets served the same purpose as the tomahawks at this time. Although the exact shape of each is not specified, it is likely the small hatchets were of the type already offered and widely available to the Indians as small camp hatchets (trade axes).

Mark further notes that a 1701 cargo list of trade goods delivered as far west as Fort Biloxi, Mississippi, by the French ship “L’Enflamme,” (I don’t speak French, but I get the gist, and I doubt I’d want to voyage across the 18th century ocean on a ship of that name) including “300 medium hatchets” and “600 small hatchets“:

The presumption is that this far greater quantity of small hatchets would have served both as a tool and weapon as need be. Anytime a trade good could serve more than one purpose it meant fewer encumbrances to carry in which mobility on foot was more often a necessity than not and carrying both a trade axe as well as a tomahawk would have created more unwarranted baggage.

And then there’s this 1591 engraving by De Bry in “A Briefe and True Report of the New Found Land of Virginia,” depicting a 1564 axe attack on a Frenchman (can we blame them, really…. That guy no doubt had an annoying accent and was probably lazy as all get-out), which Miller also sites as possible clue, if not artistic license:

This illustrates the murder of French soldier, Pierre Gambre. He was apparently stationed at Fort Caroline.

Good ‘ole Pierre left the fort with a supply of inexpensive goods and a trading license. Within a year’s time he had acquired considerable wealth. But it was not to be. While attempting to return to Fort Caroline for a “visit,” he was murdered by his native porter, “who was motivated partly by revenge and party by a desire to acquire the goods Gambre was carrying with him. See Four Centuries of Southern Indians, Charles Hudson, 2007, at p. 18. I’m just going to assume there was more to the story, involving the chief’s daughter and a few gallons of rum….

Then there’s this. This was found supposedly in the grave of Ousameequin or possibly a related individual, chief of the Wampanoags who interacted with the pilgrims in 1621 Massachusetts, a’la the First Thanksgiving. As in “Thanksgiving” the holiday. It’s been sitting in a museum and is about to be repatriated / reburied. Unfortunately I can’t find other pics or even dimensions. Man if I found that thing, they’d have to pry it out of my dead cold hands…. Bury it my rear-end. You and what army?

And speaking of it looking like a Viking axe…..