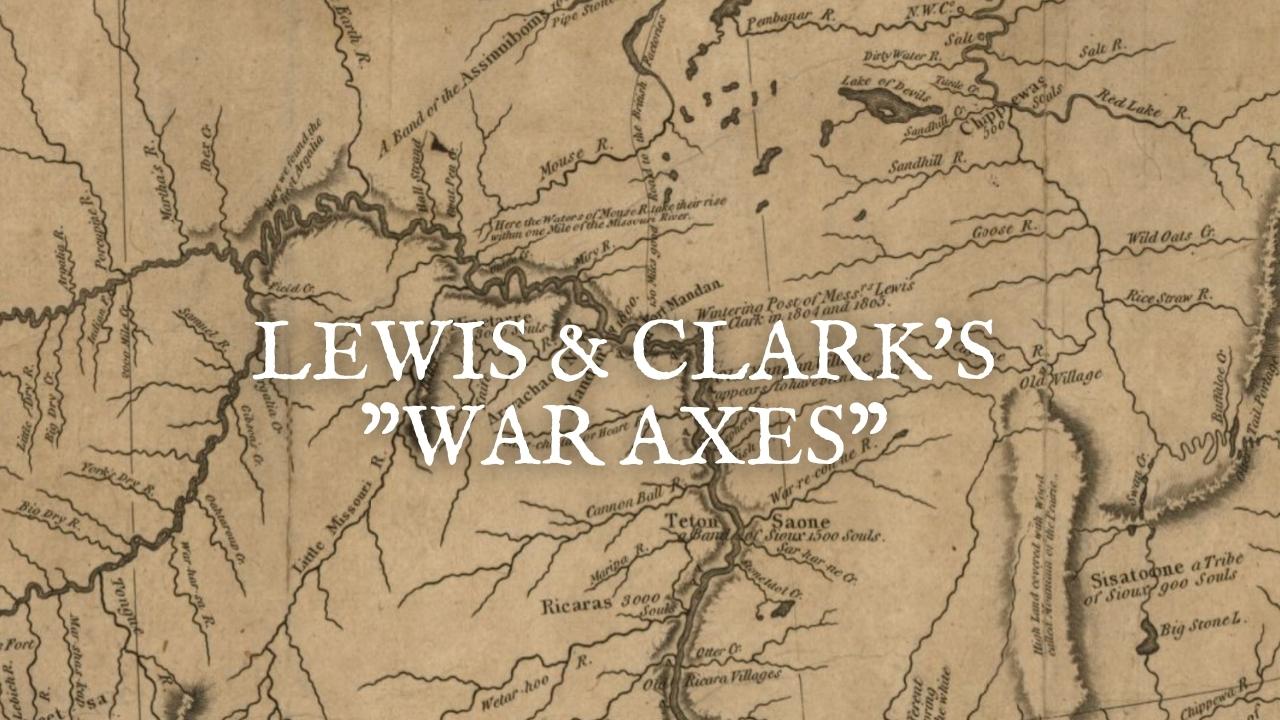 The phrase “Missouri War Axe” really has two different meanings. From my understanding, it was contemporary collectors who termed the “MWA” phrase, referring to what are generally 19th century large flared axe shaped tomahawks, sometimes without shaped cutouts. However, the term was derived, at least in part, from the Lewis and Clark journal descriptions of the “war axes” or “battle axes” they observed in the possession of the western Indians during their famous journey. They ended up setting up a blacksmithing business to cater to this “war axe” trade, both manufacturing new ones, as well as repairing existing examples.

The “Missouri War Axe” as utilized by contemporary tomahawk collectors generally refers to this sort of weapon:

They also were made as pipe tomahawks. Here is a somewhat later pipe tomahawk version, with more intricate cut-outs:

Here is a sketch by William Clark in 1805, showing what appears to be a non-pipe tomahawk in the shape of a spontoon tomahawk, though sort of triangular in shape, rather than the traditional spontoon design that you see in the 18th century spontoon tomahawks (pipe and otherwise):

Apparently Lewis and Clark perceived this unusual axe shape to be war or battle axes, unsuited to practical usage, and perhaps even unsuited as a weapon, except as a tool of last resort. So maybe more of a status symbol or prize. Given the fact that they had a blacksmith along on the journey, when they set up their winter camp, they set up a temporary blacksmith shop, making new “war axes,” in the popular design they observed in use by the locals, as well as repairing existing examples. Eventually, as Lewis and Clark proceeded further west, they would find some of their own blacksmith forged “war axe” products already in the hands of some of the tribes further to the west, which is pretty remarkable.

Here’s a good description I found from one of the great Lewis and Clark online resources, which describes their interactions with these axes:

For the rest of the winter the smiths were busy filling Indian orders for war axes. When the forge ran far behind on orders, an old burned-out stove was salvaged and cut up to make arrow points and buffalohide scrapers. Because unworked metal was so scarce at this point, Lewis established a short-term exchange schedule. The smiths were to charge seven or eight gallons of corn for each four-inch piece of sheet iron. Just how important this trade had become was plain when Lewis wrote that “the blacksmiths have proved a happy resource to us in our present situation as I believe it would have been difficult to have devised any other method to have procured corn from the natives.” As the winter began to break in March and warriors started to talk about the spring raids, the pace of war axe production increased. By March 13, Clark observed, “Many Indians here today all anxiety for war axes the smiths have not an hour of idle time to spare.” Because the captains had so often emphasized the American desire to end intertribal wars, arming warriors with weapons made at Fort Mandan put the explorer-diplomats in an odd position. The captains never intended to fuel the fires of raid and ambush, but neither were they so naive as to think that the “impliments of War” from the Mandan forge were for defensive purposes only. Typical of this dilemma was the request from a Menetarra war chief who came to purchase an axe and obtain permission to attack Sioux and Arikara warriors. For the proper price in corn the axe was handed over, but the request to use it was denied. The Hidatsa chief must have wondered just what sort of man would arm a warrior and then tell him not to engage the enemy. The war axes were prized possessions and some ended up being traded with other Indians for equally desirable goods. How far those products of the Mandan forge traveled was discovered some fourteen months later when the expedition, on its way home, stopped at the Pahmap Nez Perce village. Ordway discovered that the Fort Mandan axes were being used as pieces in an Indian gambling game. The Nez Perce player explained that they had gotten the axes from some Hidatsa traders.

Here are some of the other journal entries mentioning the axes:

Pleasent morning wind from N. W. fair; visited by many of the natives who brought a considerable quanty of corn in payment for the work which the blacksmith had done for them –   they are pecuarly attatched to a battle ax formed in a very inconvenient manner in my opinion.  it is fabricated of iron only, the blade is extreemly thin, from 7 to nine inches in length and from 4¾, to 6 Inches on it’s edge, from whence the sides proceed nearly in a straight line to the eye where it’s width is generally not more than an inch. The eye is round & about one inch in diameter.    the handle seldom more than fourteen inches in length, the whole weighing about one pound—    the great length of the blade of this ax, added to the small size of the handle renders a stroke uncertain and easily avoided, while the shortness of the handel must render a blow much less forceable if even well directed, and still more inconvenient as they uniformly use this instrument in action on horseback. The oalder fassion is still more inconvenient, it is somewhat in the form of the blade of an Espantoon but is attatchd to a helve of the dementions before discribed    the blade is sometimes by way of ornament purforated with two three or more small circular holes—    the following is the general figure    it is from 12 to 15 inces in length

Tuesday 5th Feby. 1805.    the morning clear.    the River Riseing So that the water Spreads over the Ice in Sundry places near this.    the Coal being ready for the blacksmith to work    the Savages bring corn to have their war axes made & to get Scrapers to dress their buffaloe Robes with &.C.—

several of the natives gambled in the same way as those below had buff aloe robes war axes & C. staked up the war axes these Indians have they got from the Grousevountares on the Missourie & they got them from us at the Mandans.

As the Indians who were on their way down the Missouri had a number of spare hoses with them I thought it probable that I could obtain some of them and therefore desired the Cheif to speak to them and inform me whether they would trade. they gave no positive answer but requested to see the goods which I was willing to give in exchange. I now produced some battle axes which I had made at Fort Mandan with which they were much pleased. knives also seemed a great demand among them. I soon purchased three horses and a mule. for each horse I gave an ax a knife handkercheif and a little paint; & for the mule the addition of a knife a shirt handkercheif and a pair of legings . . . .

And finally, to my actual inspiration for this post, here is a wonderful early non-pipe spontoon style tomahawk that may have been just the sort of “war axe” or “battle axe” observed by Lewis and Clark. These were sent to me by the collector who owns it. He noted that it has a “Y” symbol that is repeated several times on the blade. The significance of the markings is unknown. It has an old hickory haft and brass tacks added later in its life. It appears to have the same general shape as the head drawn by Clark. Though it doesn’t have circles cut-out of it, it does have little circles impressed into the blade, running about midway down the blade on both sides. I very much appreciate the owner sharing it.

This piece may be an example of the “war axe” design observed by Lewis and Clark, which prompted them to have their blacksmith start hammering out cheap imitations of the design. Or perhaps not. Certainly the spontoon style itself was an early one, and was used by the eastern and northern tribes. However, the sort of triangular shape to this piece, coupled with the little circles and the overall similarity to Clark’s sketch, certainly stirs the imagination….

Here’s a prior post I wrote on spontoon hawks, in general: