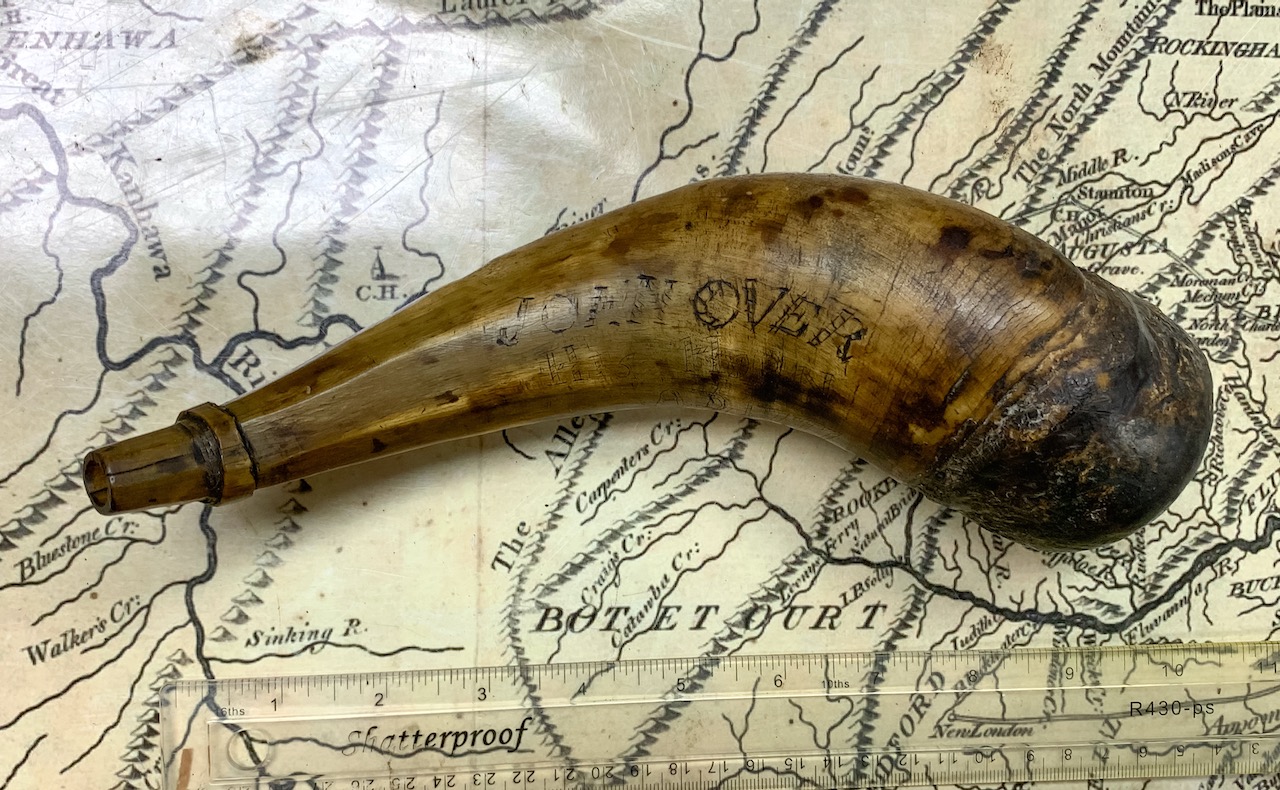 The pension narrative, completed in 1832 from Wayne County, Ohio, describes that John Over first enlisted in the Lancaster County, PA militia in July of 1777, and was in service through September of that year, under a captain by the name of “Kohns.” (Johns?) He helped guard an important ferry on the Delaware River known as Coryell’s Ferry, as well as the Minisink Ford, along with other important places along the Pennsylvania frontier, from incursions by the “British & Indians.” His job was to guard over provisions, as well as to protect from the “constant incursions” of the enemy.

In 1778, Over was again drafted into the Lancaster County militia, beginning on June 20, 1778, serving under a Captain Kelly, with a “Major Hare” also serving in the chain of command. Over recalled that the drummer in this company was named “Brooks.” He further recalled that other men in the company were named, Wilson, Louis Fishburn, Philip Fishburn, and one “Stillinger.” Apparently Phillip Fishburn, also applied for a Revolutionary War pension the following year in 1833. Phillip’s father was a gunsmith during the war, having been born in Germany, and died in Dauphin County, Pennsylvania. They marched from Lancaster to “places on the Neshaminy Creek,” and “along the Delaware River at a place called Bristol above the City of Philadelphia.” He also was stationed for a while at “Newton in Bucks Co. Pa,” before marching back to Lancaster County.

In 1779, John Over described serving four months under Capt. Johns/Kohns and Col. Kelly, guarding provisions and the baggage of the army at “stations on the Delaware,” the last of which was at “Crooked Billet,” which Over described as being “on the old Fork Road.” Over stated that, “while stationed there he was in a severe skirmish with the British – that the Americans fought bravely but being overpowered by numbers they were compelled to retreat.” This refers to the Battle of Crooked Billet, which occurred on May 1, 1778. Thus the elderly Over was likely mistaken in recalling the year as 1779, rather than 1778.

An account of the battle, published on May 5 in Philadelphia’s Royal Pennsylvania Gazette, reads as follows:

On Thursday night last, a small party of the British infantry, dragoons, and Queen’s rangers, with a few of Capt. HOVEDEN’s Pennsylvania, and Capt. JAMES’s Chester dragoons, left the city about eleven o’clock, and proceeded up the Old York road. About a mile beyond the Billet they fell in with Lacey’s brigade of militia, consisting of about 500 men, and immediately attacked them: Lacey, at first, made some appearance of opposition, but, in a few seconds, was thrown into confusion, obliged to retreat with precipitation, and were pursued about 4 miles. They left between 80-100 dead on the field; and on Friday, between 50-60 prisoners, besides waggoners, with 10 of their waggons loaded with baggage, flour, salt, whiskey, &c. were brought in by the troops on their return: What number of rebels were wounded, we have not been able to learn. Besides the above waggons, 3 were burnt after taking out the horses; also all the huts and what baggage could not be brought off. The royal party did not lose a single man on this occasion, and have only 7 men wounded, and 2 horses killed.

Almost immediately after the battle, reports surfaced that British and Loyalist troops had committed atrocities, including the murder of prisoners-of-war and setting fire to the American wounded. Official reports to American leadership contained the following description:

Some of the unfortunate, who fell into the merciless hands of the British, were more cruelly and inhumanely butchered. Some were set on fire with buckwheat straw, and others had their clothes burned on their backs. Some of the surviving sufferers say they saw the enemy set fire to wounded while yet alive, who struggled to put it out but were too weak and expired under the torture. I saw those lying in the buckwheat straw—they made a most melancholy appearance. Others I saw, who, after being wounded with a ball, had received near a dozen wounds with cutlasses and bayonets. I can find as many witnesses to the proof of the cruelties as there were people on the spot, and that was no small number who came as spectators.

Over thereafter described continued service during the war, including duty guarding British prisoners of war. In the interrogatory section of the pension application, Over is asked his place and date of birth. He answers that he was born in Lancaster County in 1763. This places his age in 1777 as only around 14 when he began service and carved on this powder horn. He further answered that, following the war, he moved to Cumberland County, Pennsylvania, then Dauphin County, and finally Wayne County, Ohio. Here is his pension narrative: