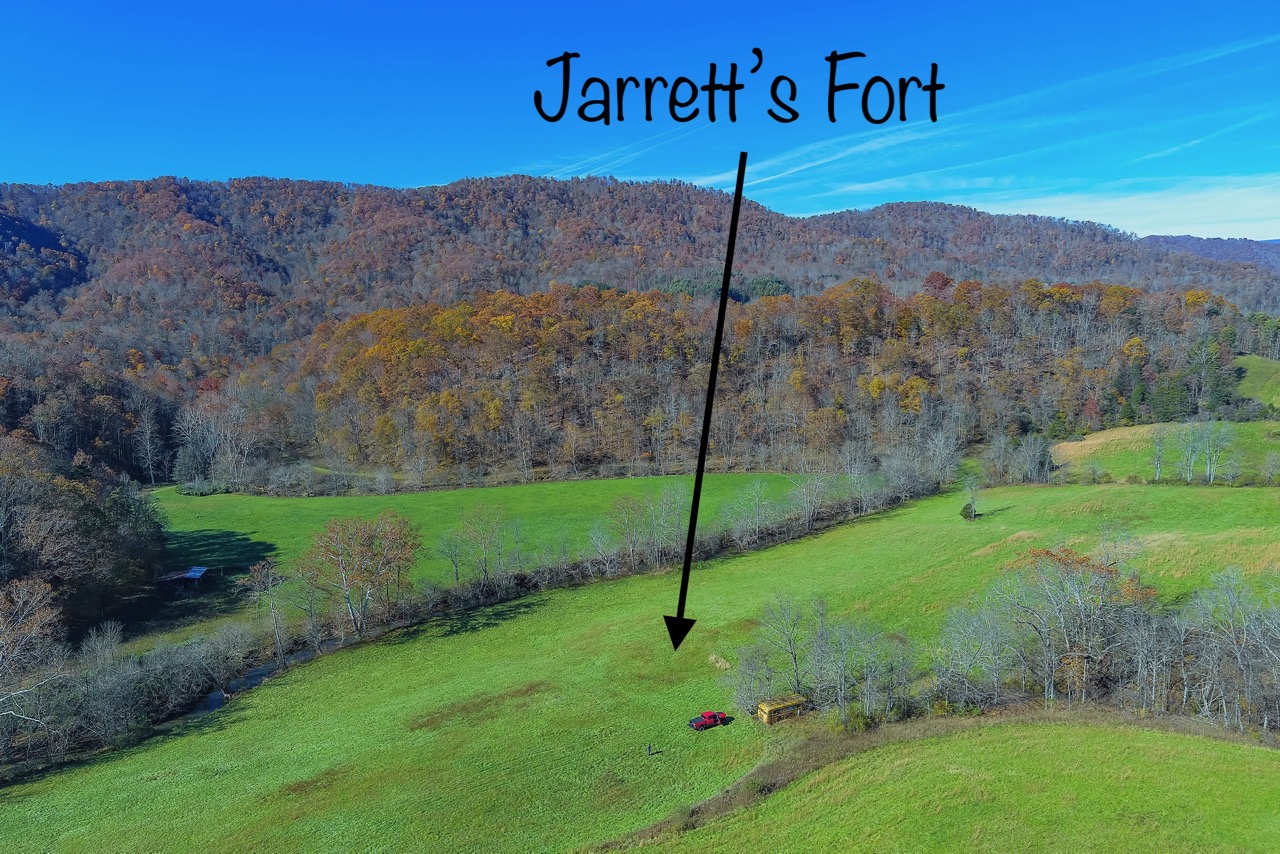 This is the location of Jarrett’s Fort, built circa 1770 by David Jarrett, on the banks of Wolf Creek, Monroe County, West Virginia. There isn’t much known about it, since it was only in existence a few years, and doesn’t pop up much, if at all, in period writings. But tradition has it, that during the Dunmore’s War period, Daniel Boone was placed in temporary command of the fort for a period of time, circa 1774.

“Forting up” was a necessary precaution in a dangerous time of resettlement, which followed a period of about seven years after white settlers had been completely driven out of the area, or killed:

Forts were usually located in the approximate center of a settlement cluster or neighborhood. They were often built by, or on the land of, a prominent settler who may have donated land and materials, or supervised construction to gain prestige as well as defense. Sometimes they were built around an existing house, which continued as a residence during and after the fort era. Forts were always near a permanent water source such as a spring or creek and they were usually on a ridge or terrace, high, but not too high for settlers to reach. They were also on or near trails or roads.

Forts were quite numerous. For example, we know of at least 32 privately built or militia-built forts in the Greenbrier Valley of West Virginia by the Revolutionary War, though a few were built there during the earliest (unsuccessful) settlement attempts of the 1750s and early 1760s. The distance between forts varied with population density, areas of cleared land, and exposure to danger. Virginia’s official French and Indian War “Line of Forts” were placed every 15-26 miles, but there were private forts in between.

In the Greenbrier Valley, forts were located 3-10 miles apart during the Revolution. Randolph County settler David Crouch (1841) stated that “In Tygarts Valley (WV) the forts were not more than 4, 5 or 6 miles apart. There were some 10 or 12 forts. All of the forts were stockaded, with bastions for he sentries to stand in at night.

David Jarrett was one of the 1770(ish) era settlers who re-entered the Greenbrier Valley after the dust from the 1763 Pontiac’s War cleared. As I’ve written about before, the Shawnee, led by Cornstalk, burned every cabin in the valley in that year, and committed several massacres in the valley, which was the eastern front of Pontiac’s chain of surprise attacks on white settlements and forts.

Jarrett’s Fort was originally described as being at “the mouth of Wolf Creek,” which threw off the trail for recent investigators searching for it. Nevertheless, it was discovered to be around 3 miles upstream from Wolf Creek’s confluence with the Greenbrier River – at this very spot. Many forts went up at this same time, including Byrnside’s Fort, Fort Savannah, Arbuckle’s Fort, Donnally’s Fort – and others.

Archaeologists W. Stephen McBride and Kim A. McBride found the fort location. They found a 270 acre survey for David Jarrett and traced that property to the current owner, who allowed them to perform some archaeological excavations. The owner told them that local history told of “an old stronghold” on his property. Using metal detectors, they confirmed the spot, which was then excavated to some extent.

By the time I tracked down the actual location and the owner, I realized that I had actually represented the guy’s wife in his divorce a few years back. What are the chances? But fortunately, he was nevertheless willing to take me to the site and let me explore and fly my drone.

The funny thing about this spot is that there’s high ground right behind the fort site. That would allow attackers to shoot down into the fort from within rifle range, and possible musket range. Maybe that’s the reason it was eventually abandoned.

With the permission of the landowner, I returned at one point to metal detect. But I found nothing. Absolutely nothing, except modern brass shells, and one modern archery broadhead. I’d say the archaeological excavation was pretty thorough.

This is one of the five West Virginia fort sites where archaeologists have found evidence of a stockade wall: Arbuckle’s Fort, Jarrett’s Fort, Donnally’s Fort, Warwick’s Fort, and Fort Edwards in Hampshire County. The McBrides noted in their research that:

In all cases, the stockade trench was about 50 cm (18 in) wide and 30-50 cm (12-18 in) deep. It was usually found at the plowzone-subsoil interface at 30-40 cm (12-16 in) below surface. Depending on the soil color and conditions, the stockade trench is usually easy to see, because the trench was excavated into subsoil and backfilled with darker humus and sometimes midden soils. The stockade trench may have openings for gates, or otherwise be discontinuous, such as when it connected buildings, as was the case at Fort Donnally.

The McBrides also wrote about the types of finds which they generally find at fort sites, and which we certainly can confirm from our experience with Byrnside’s Fort:

Wrought nails and cast iron kettle fragments have been the most common diagnostic items found on fort sties during our metal detecting. Other artifacts include iron and pewter utensils, brass and pewter buttons, and musket balls.

At Jarrrett’s Fort, within a short period of time of firing up the metal detectors, they found numerous wrought nails, cast iron kettle fragments, a two tined fork, creamware, redware, a brass coin button, and animal bones. We’ve found piles of the same sort of stuff at Byrnside’s Fort.

It’s fascinating to study the architecture and layout of these early frontier forts. But there’s little to nothing available to study. There are some period historical descriptions available. The aptly-named “Spencer Records,” who arrived in Kentucky in 1783, later gave a first hand description of the frontier “stockade forts” he observed in Kentucky:

As I have mentioned forts and forting, I will for the information of those that never saw a stockade fort, describe one, and lay down a plat thereof. In the first place the ground is cleared off the size they intend to build the fort, what was an oblong square . . . . Then a ditch was dug three feet deep, the dirt being thrown out on the inside of the fort. Logs, twelve or fifteen inches in diameter and fifteen feet long, were cut, and split open. The top ends were sharpened, the butts set in the ditch with the flat sides all in, and the cracks broke with the flat sides of others. The dirt was then thrown into the ditch and well rammed down. Port holes were made high enough that if a ball should be shot, it would pass overhead.

The cabins were built far enough from the stockade to have plenty of room to load and shoot. Two bastions were constructed at opposite corners . . . with port holes about eighteen inches from the ground. The use of these bastions was, to rake the two sides of the fort, should the Indians get close up to the stockades, so that they could not shoot them from the portholes in the sides. Two gateways were made fronting each other . . . with strong gates and bars so that they could not be forced open.

Some forts called Stations, were built with cabins all set close together, half-faced, or the roof all sloping one way with high side out, raised eight feet high, and overlaid with split logs. The upper story was jutted two feet, and raised high to have plenty of room to load & shoot, with port holes both above and below. The use of the over-jut was to prevent the Indians from climbing up should they get close to the wall, and from it they could shoot down on them. Such was Bryan’s Station.

From what I’ve read, new settlers were flooding into Kentucky at the time when a lot of these early forts, or stations, were being built there. They had a large amount of unexperienced people, now in potential danger. As such, they were required to house a large number of people in a large number of forts. Whereas in West Virginia, in the Greenbrier Valley, there was never any huge influx of settlers, as indicated by its small population still today. Most of the settlers were experienced frontiersmen. I say this to account for the archaeological differences between descriptions such as these, and what have been found in West Virginia.

As we discovered in Byrnside’s Fort, the deep frontier forts of the Greenbrier Valley tended to be smaller, and also having stockades which attached to a more permanent log home structure. One known exception to this is Arbuckle’s Fort, which was just purely constructed as a fort, as far as we know. But in general, they tended to be a privately funded endeavor financed by a wealthy settler, such as Andrew Donnally, James Byrnside, John Stuart, or David Jarrett. It has been confirmed that Donnally’s Fort and Jarrett’s Fort had stockade walls which attached to the living structure, i.e., cabin. We also confirmed 100% that Byrnside’s Fort was the same.

There are few surviving frontier forts:

If they survive in any form at all, station and fort sites exist with few exceptions as archaeological sites. Many have been destroyed by cultivation, urban construction, or other factors. Of all the large forts in the central Kentucky area, only Fort Boonesborough still exists. Limited excavations and documentary research on this site indicate that at least one-third has eroded away, but significant deposits still exist. Both the Lexington Fort and Fort Harrod have been destroyed by urban construction. The survival rate of station sites is not fully known because only limited excavations have been undertaken at a few locales . . . . Of the approximately sixty specific locations that are suspected, only a few have been verified by archaeological excavations.

Indeed, the Greenbrier Valley was lucky in that respect, because it never really did develop – still being rural today. I’m still not aware of any other Revolutionary War era frontier fort still in existence in its original location, other than Byrnside’s Fort. Mostly you’re dealing with stains and artifacts left in the ground.