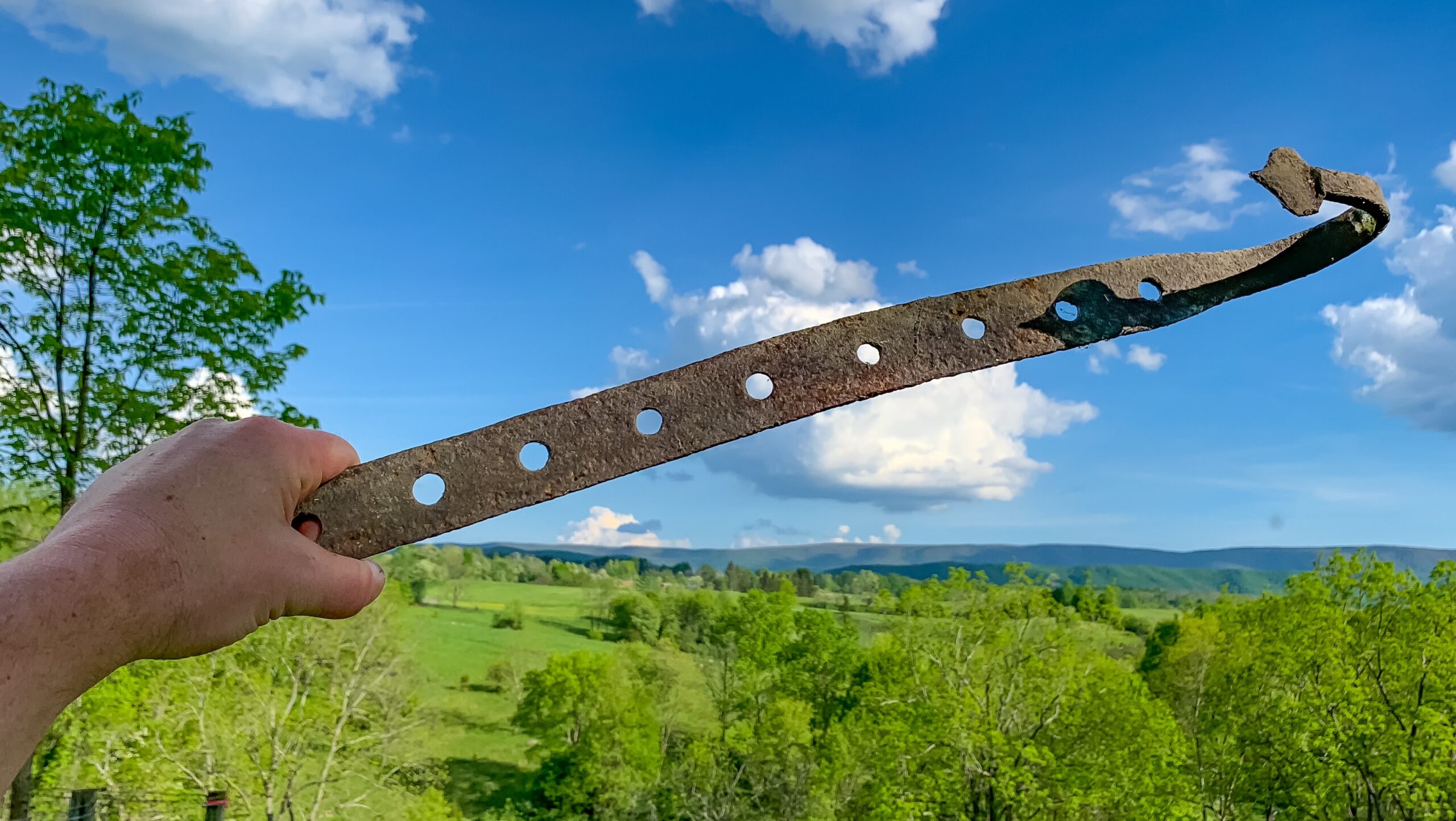 When I originally found this huge iron object at the fort, I first assumed it was a big forged hinge of some sort, or other architectural hardware.

After examining it, it’s not a hinge at all, it’s part of a very large fireplace trammel, which would have been used as an adjustable hanger for kettles for cooking in an open fireplace.

This is a variation of an early European trammel design, possibly with German influence. Very few trammels in this type were used in America.

Trammels were made in sizes and strengths ranging from extremely heavy ones to hold large pots (such as for a fort garrison), to tiny delicate ones to hold a lighting device. There are many variations in strength, decoration, and quality.

Some of the French and German trammels are elaborately scrolled and decorated. This one has a feature I don’t see on the other examples, the spade shape on the end of the hook. Also, on the back, look closely and you’ll see an “X” design in between each hole. I’ve seen that before on 18th century American household items. We have a flax scraper dated 1774 with the same design. Others say the X design relates to some sort of slave graffiti or code….

It’s neat to think that this huge trammel dates to the fort, and was used by its occupants. Obviously, it was made big enough to hang a large kettle for cooking for a large number of people. We know that Byrnside’s Fort was built by 6 families to house what were probably very large families, in times of danger. We also know that it had a permanent garrison of Virginia militia rangers for 11 or 15 years. This would have required a lot of cooking in bulk.

Come to think of it, I have found some fragments of large kettles, probably used with the trammel.

Another cooking item I found was the handle off a skillet, blacksmith-made wrought iron, with a little design on the end of the handle.

Update: December of 2021: When touring the Dickson home about 10 miles North of Byrnside’s Fort, I found an almost identical trammel wedged up into the fireplace of the oldest (log cabin) section of the Dickson home. It’s a little smaller, though appears to be identical in design, and perhaps made by the same blacksmith:

More on the Dickson home:

Also, while I’m updating, here’s the trammel back in Byrnside’s Fort, replete with a replacement part, courtesy of Jim Costa, hanging to the right side of the very same fireplace where it was likely used: