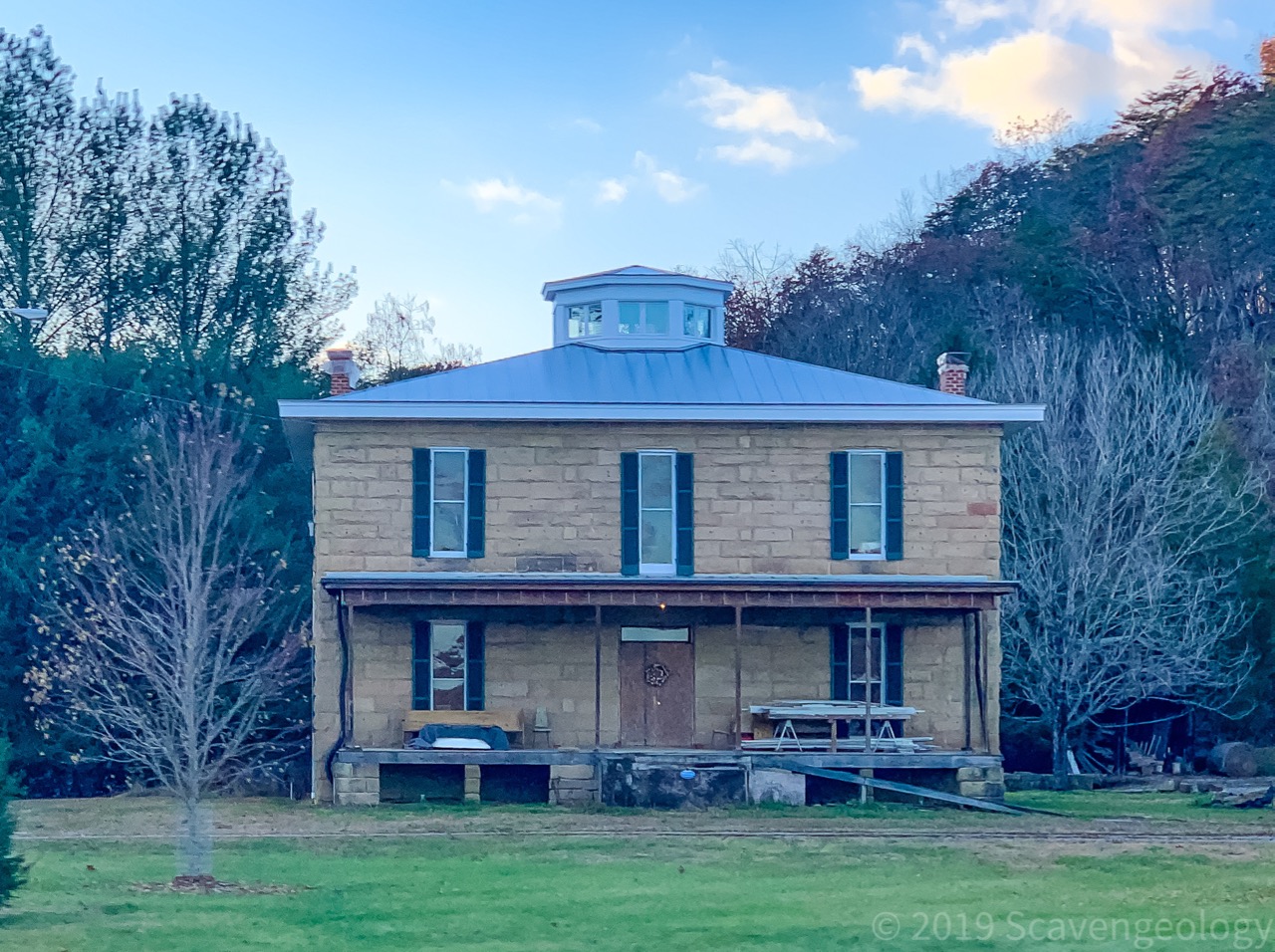 You may have noticed this house on the side of Route 35 in Mason County, West Virginia, if you’ve ever driven the treacherous route from the West Virginia Turnpike through to Route 35 into Ohio. This is the home built by Confederate General John McCausland. There’s no good way to stop to get a photo of it, so the other day I had Julie open the window and snap a pic, as we drove by, flanked by tractor trailers on all sides.

It’s pretty interesting that a notorious ex-Confederate general would build his home in an area which fought against the Confederacy – especially a general who was responsible for burning the only northern city to be burned during the Civil War. Legend has it, that paranoia due to this is the reason Gen. McCausland built the turret watchtower on top of the house. If the yankees were coming for him, he’d be able to see them coming. As is usually the case, if you look just below the surface, the true history is more interesting that you would think.

Before the war, he had been a professor at VMI, along with “Stonewall Jackson.” In 1859, when the John Brown Raid occurred, McCausland and Stonewall Jackson commanded a unit of VMI cadets at the execution. During the war, Gen. John McCausland was a cavalry leader, primarily based in southwest Virginia. McCausland’s nickname was “Tiger John,” for his notorious partisan raids on horseback. After the death of General Jenkins at Cloyd’s Mountain, he took command of the entire western Virginia (and West Virginia) forces, and moved eastward and northward, eventually propelling him to infamy, primarily by burning Chambersburg, Pennsylvania to the ground:

Afterwards, he rejoined the Army of Northern Virginia, and as Lee was preparing to surrender, he escaped with his men, eventually heading to Lynchburg, Virginia, and disbanding his forces on his own terms. Though he was paroled (not pardoned) in Charleston, West Virginia on May 22, 1865, he knew he had no choice but to flee the country, because Franklin County, Pennsylvania was pissed. He went to Canada, then England, then Scotland, and then France, where he joined the French Foreign Legion, and was deployed to Mexico to fight in the Mexican civil war.

HARDLY a man is now alive who remembers that famous day and year when a thrill of horror went through the North as the news came that a Confederate cavalry general, one John McCausland, had led his troops into Chambersburg, Pennsylvania, on the thirtieth of July, 1864, and burned the greater part of that town to the ground.

In an hour this inconspicuous brigadier-general who, with “Stonewall” Jackson, had been a professor at the Virginia Military Institute prior to the war, became one of the most execrated of men. He was declared an outlaw, a brigand, a violator of all the decencies of war and the laws thereof; a beast who warred on women and children. Had the word “Hun” been in use then it would instantly have been applied to this destroyer of private property.

It was open declared that no quarter would be granted him if he were caught – and was so nearly caught by General W. W. Averell just a week later that he lost his artillery, three flags, nearly all his wagons, 420 prisoners, including thirty-eight officers, besides about a hundred killed and wounded . . . .

On January 23, 1927, he died in his sleep at the age of ninety in the West Virginia town that bears his name – the survivor of almost all those who once thirsted for his blood and, with one exception, the last of the Confederate generals. More than that, General McCausland was of the Old Guard who die but never surrender. Lee might give up his sword and Early and Johnston and Pickett and all the rest, but not the destroyer of Chambersburg. There was no Appomattox for him.

With numerous others he went into Mexico and began that hegira through Europe which for some of these irreconcilables led to Egypt, service in the Egyptian army, and almost two decades of wonderings. McCausland’s exile was cut to two years because Ulysses S. Grant came to his rescue, declaring that Chambersburg belonged in the category of things to be forgotten and forgiven, which resulted in the quashing of indictments – for arson – brought against McCausland and General Bradley T. Johnson in Franklin County, Pennsylvania.

General McCausland came back, but never yielded to the “Yanks.” To his dying day he boasted that he had never surrendered, nor taken the oath of allegiance. If ever a man deserved to have the “Stars and Bars” on his coffin it was surely the “Hun” of Chambersburg.

Apparently, while on his exile, McCausland saw fierce fighting in Mexico while serving with the French Foreign Legion, and was several times received at the Court of the Emperor Maximillian. When the French forces withdrew in late 1866, the old general remained, this time supporting another confederate cause: the ill-fated Confederate colony of Carlota.

In case you didn’t know, “Carlota,” was known as the New Virginia Colony, which was a plan to colonize central Mexico with ex-Confederates. This was with the approval of the Emperor of Mexico, which you will read about below, if you didn’t know there was such a man. The ex-rebels were going to be offered land grants to resettle there, though slavery would be banned. Some settlers did show up, including ex-Confederate generals. But it wasn’t to be. Mexico was involved in its own Civil War, and the other side won, so the settlers had to flee, and they were all gone by 1867.

Why were the French fighting in Mexico? I bet you didn’t know that they were. In 1857, Mexico became involved in their own civil war. The U.S., and other european powers, supported the side they believed was the “Mexican government.” This support consisted of money. As things spiraled out of control, the Mexicans stopped paying on the debt. On Halloween, 1861, the Spanish, French and British agreed to intervene in Mexico to recover their money. They actually landed troops in Veracruz on December 8, 1861. The United States was obviously busy during this time. As would be the case during the succeeding century with europeans attempting to colonize and micromanage third world countries, it went poorly. The natural reaction was for Napoleon III to invite Maximilian, Archduke of Austria, to become the new Emperor of Mexico. That was of course an obvious solution; they should have thought of that earlier….

So that’s what happened. Things then again went predictably, and it would be up to the U.S. to fix the mess once they resolved their own civil war. Eventually the French withdrew in 1866. The U.S. subsequently intervened and warned Austria not to send additional troops to assist the emperor. Without support of the U.S., or of his native Austria, or of other european powers, things went poorly for the emperor. He was captured, court martialed, and executed. Interestingly someone offered him an escape plan at the last moment, which may have saved his life. But, he declined because it required him to shave his beard, and he wasn’t having any of that. Looking at his picture, we can see why, and we have to respect that sort of dedication to beard maintenance:

After General Grant saved his neck, he returned the U.S., and eventually settled in Henderson, West Virginia – which is directly across the Kanawha River from Point Pleasant. He purchased more land and focused his type A personality on farming now, rather than war. He built this stone house on the south side of the Kanawha River, near Pliny, West Virginia. There, he installed the first telephone system in the lower Kanawha Valley, in order to link his various parts of his properties. How did he end up in the Point Pleasant area? He was born in St. Louis, Missouri, the son of Irish immigrants, but he and his brother were orphaned, and went to live with their aunt, Jane Smith, in Point Pleasant, (West) Virginia. From there, he traveled to the interior of Virginia in order to attend Virginia Military Institute, where he graduated in 1857, and thereafter became a professor of Math there, until the war broke out.

At the time, there were rumors that since the house was being built at such an apparent expense, that the wily old general must have a hidden gold hoard which he stole out of Chambersburg, prior to burning it. However, I don’t believe there’s any evidence for this. Similarly, with the house being built of solid 18 inch thick stone blocks, and including a turret on top, it was rumored that it was built as a fortress, with the general foreseeing some future effort to finally capture him. In reality, the turret was probably for light and ventilation of the stone house, and the stone was quarried on his own property using a local black teamster with oxen, for the princely sum of 50 cents per day in labor. But it makes a good story for an interesting man.

He married in 1878 and fathered four children. His wife died in 1891. However, he lived-on, and won the respect of the community. They called him the “Patriarch of Pliny.” Following his death in 1927, at almost 91 years old, his daughter Charlotte lived in the stone house. She lived there until her death in 1971. As of the preparation date of the National Register of Historic Places documents, the property was still in the family (though that was 1980). According to wikipedia, beginning in 2015, a complete restoration project began to bring the home to its original condition. I have to say, it is looking really good, compared to some of the older photos of the house. Though, speeding by under threat of death-by-semi, it’s mostly based off of a quick glance.

I’m not sure where this is, but google found me Gen. McCausland’s actual uniform coat from the Civil War. That’s pretty awesome.

Here’s a letter written by the general in 1863 from Princeton (West) Virginia, which I found. It appears to be addressed to a physician, warning the good doctor not to send any deserters under his care back to his command because they will wreak “havoc.” Instead, they must be shot:

An interesting story which followed the general’s death, involved his son. Eight years after he died, the general’s son, Sam shot and killed a guy named Chester H. West, who was a World War I medal of honor recipient who had hired on as a farm hand on the McCausland farm. Sam was convicted of 2nd degree murder. According to this article from the time, Sam claimed that the war hero attacked him with a monkey wrench. He shot Chester with the general’s rifle which had been used in the Civil War. It was this rifle which supposedly sparked the altercation, for some unexplained reason.

Eventually Chester West’s grave ended up being “lost” to history, and was rediscovered in an isolated cemetery deep in the woods of what eventually became the Chief Cornstalk Wildlife Preserve. This led to family fighting, and even litigation before the West Virginia Supreme Court of Appeals.

20 thoughts on “General McCausland’s house in West Virginia: an interesting story about war, the Emperor of Mexico, and even Egypt”