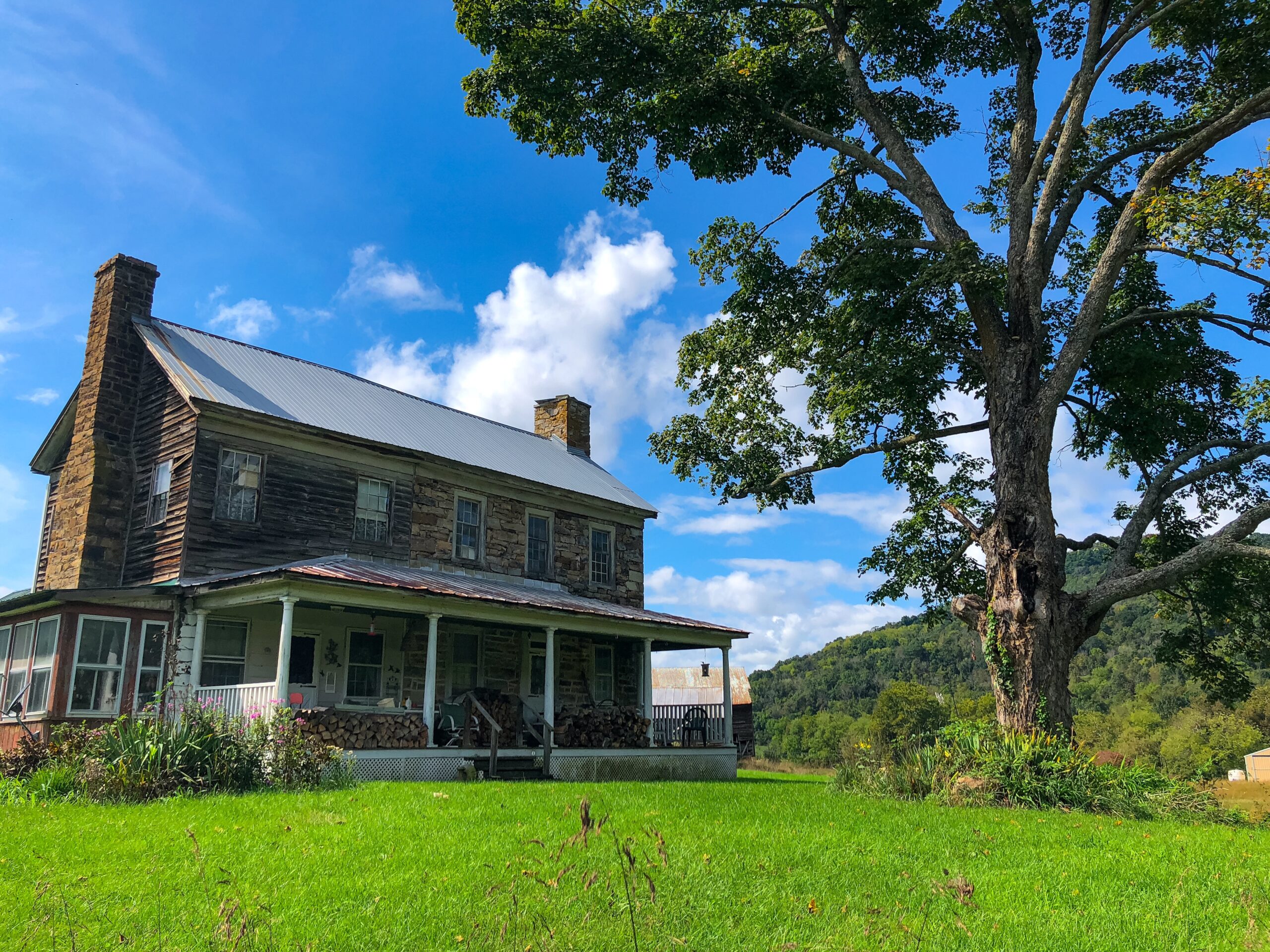 Estill Blockhouse. Built 1773. Indian Creek, Monroe County, West Virginia. This is the real thing. One of the coolest structures in all of West Virginia. A stone blockhouse fortified home from the Virginia frontier still standing, in its original location. With a history of Indian attack, and with a legendary frontier family.

I had the pleasure of getting a close-up tour of the house from the 95 year-old owner, who is a client of mine, and whose family has lived here since 1900. He himself was a B-17 pilot during WWII.  This fortified home was built with 18” thick walls to serve as a fort against Indian attack. It successfully repelled at least one attack during the summer of 1774, with an Indian being left unburied outside the house and left to the wolves. These raids precipitated Lord Dunmore’s War and the Battle of Point Pleasant.

This blockhouse was built upstream of the large fort, Cook’s Fort, and exactly 6 miles from Byrnside’s Fort on the headwaters of Indian Creek. Probably too far to rely on either of the forts, the only option was to be prepared to fort-up inside the home, which apparently did happen. Militia rangers ranged in between Cook’s Fort and Byrnside’s Fort, and no doubt stopped here along the way for some hot toddys….

In the distance, along the creek, Elk Rock can be seen. According to the childhood stories told by the owner’s mother, it was so-named by the Indians because an elk they were chasing jumped off the rock and broke its leg. They had a feast on the rock.

Wallace Estill was a man of local standing and considerable means. He was also High Sheriff of Augusta County, Virginia and lived in Bullpasture Valley at Fort George from 1745 until the time of his migration to Indaian Creek in 1773. His second wife died in 1746 and left him a widower with six children. In 1748 he married his third wife Mary Ann Campbell ; they had nine children, the youngest one being five years old when they came to Indian Creek in 1773 and built the old Stone House.

The Stone House that he built was willed to his youngest Son; Isaac and his mother Mary Ann Estill. Isaac married Elizabeth Strother Frogg, daughter of Captain John Frogg, who was killed at Point Pleasant on October 10, 1774 in the battle between the Virginia forces commanded by Gen. Andrew Lewis and the Indians commanded by Cornstalk.

Isaac was raised in the stone house from age 7, was married and raised his family of 12 children here also. He was a man of prominence and served twice as Sheriff of Monroe County, first in 1799 after the formation of the county and again in 1813. He served two terms as Delegate to the Virginia Assembly, the first term from 1806 to 1809, and the second term from 1817 to 1818.

The best known of Wallace’s sons, who also lived here, was James Estill for whom Estill County, Kentucky was named. He was killed at Estills Defeat on March 22, 1782, in a battle with a party of Wyandotte Indians at Little Mountain, Kentucky.

The old stone house is a good example of pioneer architecture, is 248 years old this year and stands as a permanent monument to i t s builder, Wallace Estill . The house is also the ancestral home of the Governor of Virginia Charles Robb. His Grandmother, Susan Gay Estill, was the Great Grand-daughter of Isaac Estill.

The Estill family still holds reunions here, or at least they used to. Here’s one from 1999 when they dedicated the nearby road marker.
http://www.geocities.ws/RainForest/1894/estillblockhouse.html

Source for most of the information on the house: http://www.wvculture.org/shpo/nr/pdf/monroe/84003634.pdf

3 thoughts on “Estill Stone Blockhouse, Circa 1773, on Indian Creek”