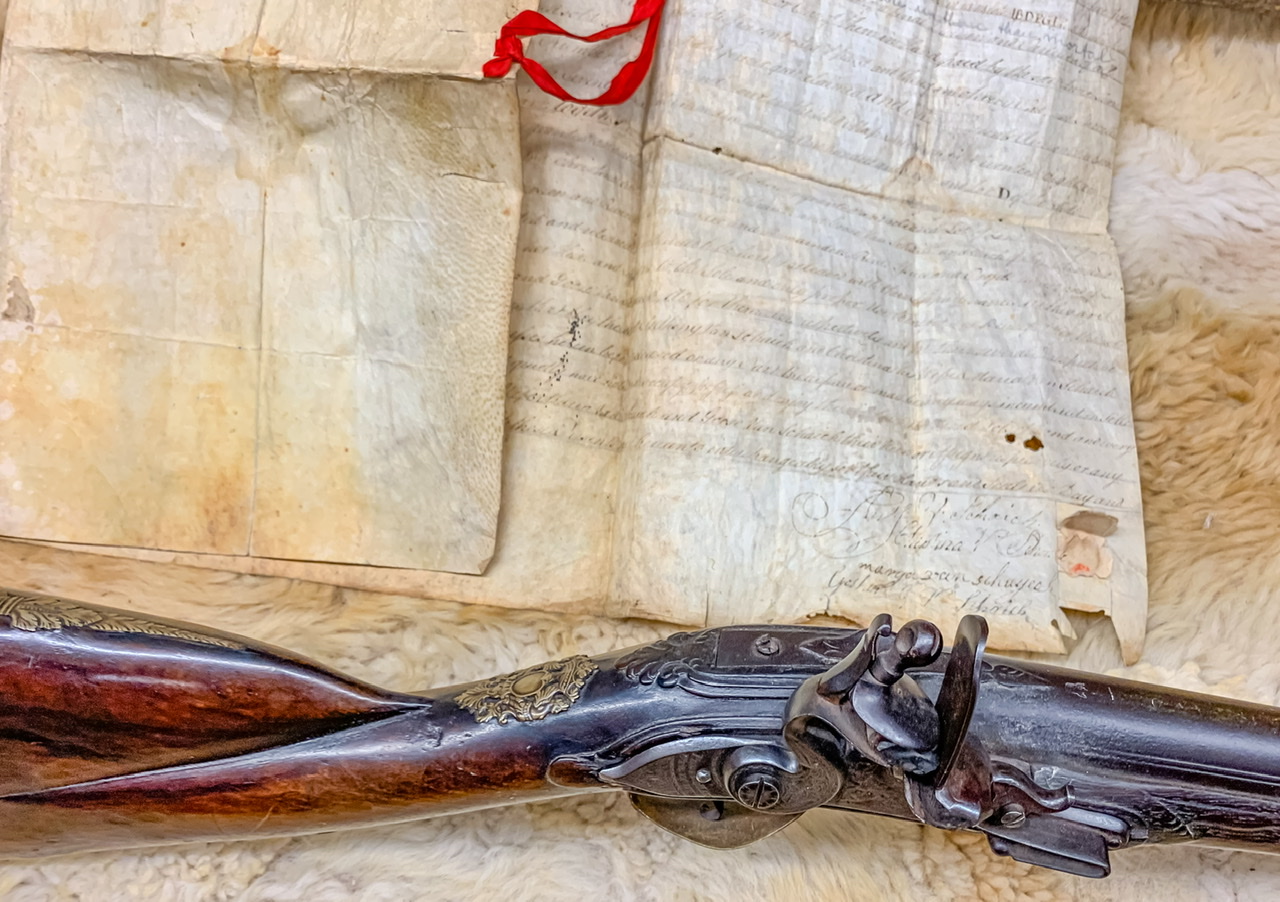 Another epic, at least to me, document find during this period of near-apoloclypse. The scavenging must go on.

This is a 1768 deed from Anthony Van Schaick, his wife, Christina Van Schaick, and what seems to me to be Anthony’s elderly father, Goosen Van Schaick, for a whole lot of land in the area of upstate New York known as the “Half Moon” which was deeded to the Van Schaick family in the 17th century. It’s roughly located in the area known as the “Sprouts of the Mohawk River.” This is where the Mohawk goes over a large falls, and sprouts into separate channels, going around several islands, at the confluence with the Hudson River.

Why the name Half Moon? Henry Hudson’s crew, rowing in a small boat from their main ship, called the “Half Moon,” may have reached the Sprouts of the Mohawk in 1609 while searching for the Northwest Passage. The land was deeded to Phillip Schuyler and Gosen Gerritsen Van Schaick in 1665. In 1674, Schuyler deeded all of his interest to Van Schaick. The Native Americans called this spot “Nach-te-Nack.” This area was inhabited by the Mohicans prior to Dutch settlement.

The islands at the mouth of the Mohawk river were, in early days, favorite resorts of the Indians. They were the southern limit of the Sarachtogue, their famed hunting and fishing ground. On Hanver Island (now Peebles Island) was the Indian stronghold “Moenimmes Castle.” The island, later known as Van Schaick, was granted by the Indians to Goosen Gerritse Van Schaick and Philip Pieterse Schuyler, in an instrument dated September 11, 1665, from “Itamonet, Ahemhameth and Kishocama,” all Mahicanders, proprietors and owners of the island, called in the Dutch, Long Island, and in the Mohican “Quahemesicos.”

Besides Long (Van Schaick) Island, the “Halve Maan” patent embraced the other islands formed by the Spruytes (“Sprouts”) of the Mohawk and a large tract of land to the northward, including the present village of Waterford (originally called Half Moon). These grants from the Indians were under permission from Governor Nicolls, and were confirmed by subsequent governors, Lovelace and Thomas Dongan. Philip Pieterse Schuyler conveyed his interest in the lands embraced in his patent to his associate, Goosen Gerritse Van Schaick, by deed dated July 12, 1674, the latter having, by will, devised the said lands to his wife Annetie; after his death she conveyed them to his son Anthony for the consideration of “550 good merchantable beaver skins.”

The Indian name of Van Schaick Island was “Quahemesicos.” The, Dutch called it “Long Island.” In early writings it is called “Whale Island,” from a whale once found stranded on it. After its transfer to Van Schaick, it was called “Anthony’s Island,” “Isle of Cohoes,” and “Cohoes Island.”

Military fortifications were erected here as early as the turn of the 18th century in order to guard against invasion from Canada, which later saw use during both the French and Indian War, and the American Revolution.

In July of last year, I wrote about the Van Schaick fowler:

This gun remained in the Van Schaick Mansion on Van Schaick Island, in the Hudson River at the mouth of the Mohawk River, from the 18th Century until 1999, when the Van Schaick family belongings were auctioned. The mansion was then sold to the Peter Gansevoort Chapter of the DAR, who turned it into a museum, still in operation.

The Van Schaick family genealogy is tricky, because they really liked the name Anthony, as well as the name Goosen. As best as I can tell, the flintlock fowler was originally acquired by, and owned by the first Anthony, sometimes spelled “Antony,” as it is on the gun, who died in 1737. He was a Dutch merchant and likely purchased the gun directly from Holland in the 1720s. As we know it remained in the house all these years, it seems to have followed the line of inheritance along with the mansion.

This first Anthony had a son named Goosen, who inherited the mansion property, which seems to have just been built, or still under construction. Then Goosen, son of the first Anthony, had a son named Anthony, of course. And to confuse things further, he was sometimes referred to as “Anthony, Jr.,” even though “Anthony Sr.” was actually his grandfather, with his father being named Goosen. Anthony married Christina. This is the Anthony and Christina Van Schaick who signed this document in 1768, along with what appears to be an elderly Goosen – Anthony’s father – who must have been still living, but inactive in management of the estate affairs.

This Anthony and Christina who signed this document had only one child, a daughter named Anna. She married another Van Schaick – John G. Van Schaick, the son of another Anthony Van Schaick of the same family. She would inherit the Van Schaick Mansion, as well as this gun. She and her husband, John, were patriots who utilized the mansion and property to the American cause during the war.

Anthony was well versed in the Iroquois language and was intimately involved with Sir William Johnson, the Superintendent over all Indian Affairs in the colonies, during the French and Indian War, as well as other legendary leaders of the time. He spent two years in a Canada prison after being captured, and was once sent on a mission by Johnson to carry a string of Wampum to the Mohawks on behalf of the King….

During the French and Indian War, the mansion served as the headquarters for Sir William Johnson, General James Abercromby and General Lord Jeffrey Amherst. Anthony Van Schaick himself was captured by the French during the war and was held prisoner for a period of time.

[A]nthony, was made a captain of Indians and woodmen in 1755, and of Rangers in 1756. A letter from Sir William Johnson, colonial superintendent of the Six Nations, written in 1750, is still preserved. In his will, dated August 18, 1781, he bequeathed all his estate to wife, Christena, during her widowhood, and after death or remarriage to his only daughter Anna, wife of John G. Van Schaick, except his farm on “Isle Cohoes, or Van Schaick Island, where I now live, together with Hanver Island, and the Island called Plate,” which land he devised to his grandson Anthony. The executor of his will was his son-in-law, John G. Van Schaick. Mrs. Anna Van Schaick was the hostess of the revolutionary officers who visited the Van Schaick home on the island, and charmingly seconded her husband in his patriotic hospitality.

The youngest surviving child of John G. and Anna’s marriage was Gerard Van Schaick, who married one Araminta Platt, who became Araminta Van Schaick. After Gerard’s death, Araminta remarried one William L. Adams in 1852. For years afterwards the island was known as Adams’ Island, and he lived in the old Van Schaick Mansion into the 20th century.

During the Revolutionary War, the mansion was headquarters for General Phillip Schuyler and General Horatio Gates in 1777. The British were intending to invade New York and seize Albany, and more of course, by coming down the Mohawk River. Van Schaick Island was already fortified, and was therefore further fortified, as well as the adjacent Peebles Island.

The generals planned the battle which was to come from inside the Van Schaick Mansion. The Continental Army had been encamped on the island, as well as Peebles Island, for quite some time. On September 8, 1777, the army marched to meet the British, and on October 17, 1777 fought the Battle of Saratoga, an epic American victory. They marched the defeated British General Burgoyne back to Van Schaick Island, and entertained him at the Van Schaick Mansion.

Upon my arrival in this department I found the main body of the Army encamped upon Van Schaick Island which is made by the sprouts of the Mohawk River joining with the Hudson River nine miles north of Albany. A brigade under General Poor is encamped at Loudon’s Ferry, on the south bank of the Mohawk River, five miles from hence: a brigade under General Lincoln had joined Gen. Stark at Bennington and a brigade under General Arnold marched the 15th inst. to join the militia of Tryon County to raise the siege of Fort Stanwick. Upon leaving Philadelphia, the prospect this way appeared very gloomy, but the severe checks the enemy have met with at Bennington and Tryon County (Oriskany) have given a more pleasing view to public affairs.

Particular accounts of the signal victory gained by General Stark and the severe blow General Herkimer gave Sir John Johnson and the scalpers under his command, have been transmitted to your Excellency by General Schuyler. I anxiously expect the arrival of an express from General Arnold with an account of the total defeat of the enemy in that quarter. By my calculations he reached Fort Stanwick the day before yesterday. Colonels Livingston’s and Courtland’s regiments arrived yesterday and immediately joined General Poor’s Division. I shall also order General Arnold, upon his return, to march to that post. I cannot sufficiently thank your Excellency for sending Colonel Morgan’s corps to this army. They will be of the greatest service to it for until the late successes this way I am told the army were quite panic struck by the Indians and their Tory and Canadian assassins in Indian dressers. Horrible indeed have been the cruelties they have wantonly committed upon many of the miserable inhabitants, inasmuch as it is not fair for General Burgoyne, even if the bloody hatchet he has so barbarously used should find its way into his own head.

Governor Clinton will be here today. Upon his arrival I shall consult with him and General Lincoln upon the best plan to distress, and I hope, finally defeat the enemy. I am sorry to be necessitated to acquaint your Excellency how neglectful your orders have been executed at Springfield few of the militia demanded are yet arrived, but I hear of great numbers upon the march. Your Excellency’s advice in regard to Morgan’s corps, etc. shall be carefully observed. My scouts and spies inform me that the enemy headquarters and main body are at Saratoga, and that lately they have been repairing the bridges between that place and Stillwater. As soon as time and circumstances will admit, I shall send your Excellency a general return of this army. I am, Sir, your Excellency’s most obedient humble servant.

Note how this portion of the document specifically identifies the property as being at “a place known by the name of the Half-moon.”

On the deed, the signatures of Anthony Von Schaick and Christina Von Schaick are clearly visible. I’m not sure about the third signature, but the fourth looks to be Goosen Von Schaick, the probable elderly father of Anthony. Or, perhaps it could be his youngest son, also conveniently named Goosen? Perhaps the unidentified third signature will solve that riddle…..

I haven’t quite deciphered this yet. Jacob Lansing perhaps. The Lansings and the Ten Broecke family, also mentioned in this document as the grantees, are also intertwined in the early history of New York.

This is found on the back, where the document first unfolds.