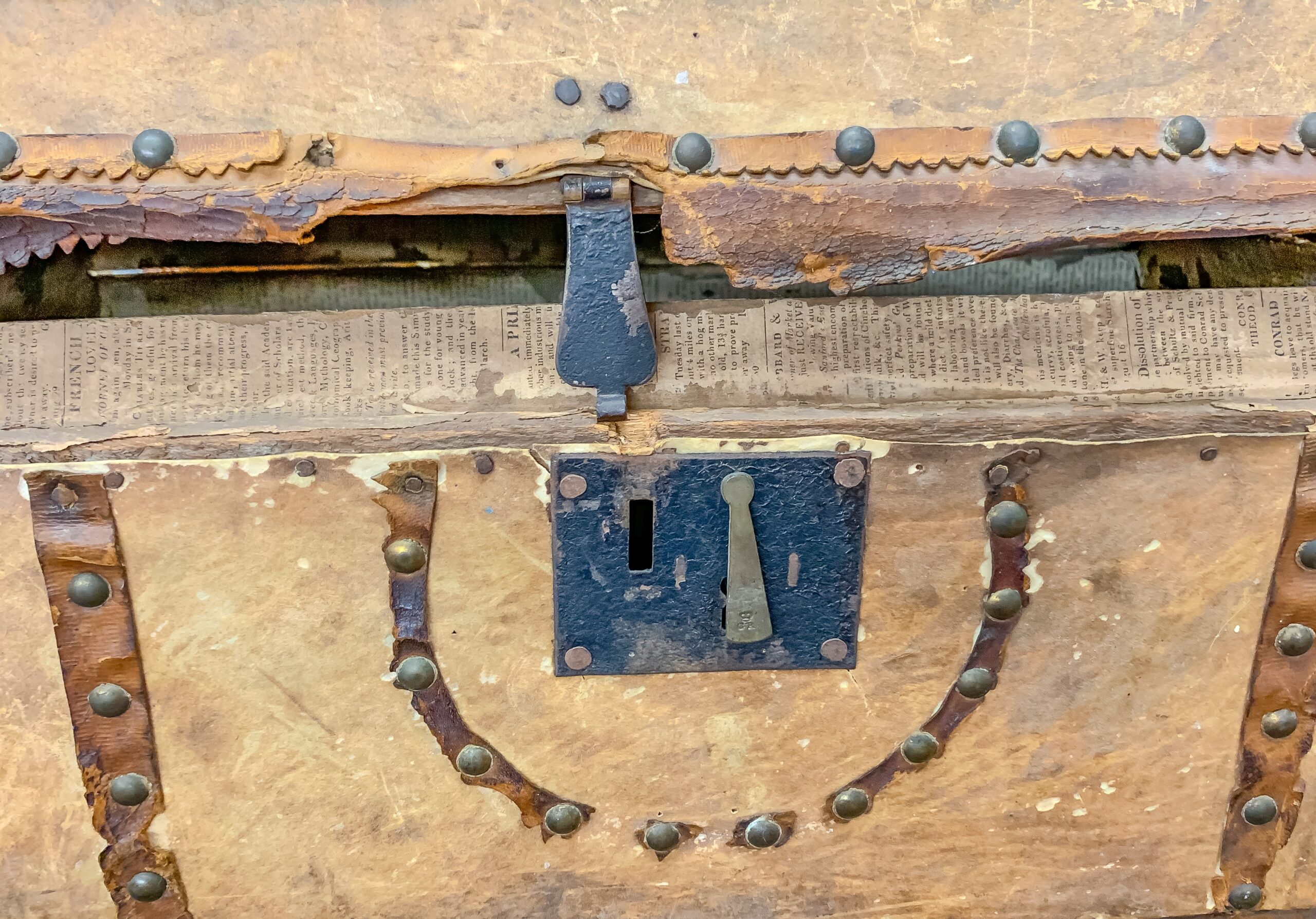 This early 19th century trunk is covered on the inside with circa 1812 Baltimore newspaper pages, and was found at a junk sale, basically. The name associated with the belongings inside, “Samuel Sands,” may not be recognizable to most, including myself at first, but a little bit of scavengeology sleuthing reveals its true historic value.

The antique trunk contains what we believe are the personal belongings of the 14 year old apprentice printer who received the original handwritten poem from Francis Scott Key, and turned it into a printed flyer, distributing 1,000 copies. Those leaflets, only 2 of which survived, went on to become our National Anthem, the “Star Spangled Banner.”

I came across a fascinating article about the National Anthem, by Barbra Presnell from The Dispatch of Lexington, entitled, “We’ve been singing anthem wrong for years:“

Francis Scott Key stands on the deck of the British ship the morning after the battle of Fort McHenry, peering through his eyeglass to see the American flag flying, and pens the words we know so well (but can’t sing), “O! say can you see by the dawn’s early light.”
It’s a mostly true story, but like all great stories, legend has taken it and run with it.

I visited Baltimore with my husband, brother and sister-in-law last weekend. Our purpose was many-faceted: baseball, family research, the Poe house and Fort McHenry. Plus seafood and whatever else we could take in. On Friday morning, we were on the second floor of the Maryland Historical Society, where an 1812 reenactor was detailing events leading up to that great battle that ended the war, when suddenly, at exactly 1 p.m., he said, “Hurry! Over here! It’s opening!”

“It” was the protective door over the original, hand-written copy of the “Star-Spangled Banner,” now owned by the Maryland Historical Society. It’s kept in darkness to protect it, and once every hour, the door slides open for viewing. We huddled around. You could see the lines in the paper where Key had folded it to pocket size. You could see where he’d scratched out words and replaced them with others (such as “through” and not “by” the dawn’s early light). You could see the uneven lines of his writing, the slant upward. We were mesmerized.

That’s when we discovered the mistake. He wrote “bomb bursting in air,” not “bombs” and “rocket’s red glare” not “rockets.‘”

She explains the background:

More deep research turned up a book, commissioned years ago by the Maryland Historical Society. Historians were also bothered by so many inaccuracies in the story we’ve learned as children. When did he actually write it? When did it first reach the public eye? When was the music added? How was it received? These were all questions they sought answers to. They didn’t take up the issue of the “bomb,” but I knew within those pages and pages of documents and research, I could find the answer. Here’s what I learned:

Francis Scott Key didn’t write the poem on the British ship. He wrote it after he returned to Baltimore, on the back side of hotel stationery. As soon as he showed it to his brother-in-law, it went viral. The brother-in-law insisted they take it to the local newspaper and have a handbill made and distributed.  Nobody was at the newspaper office, shut down for the war, except a 14-year-old apprentice named Samuel Sands. Sands typeset the poem, which hit the streets the next day, less than a week after it was written.

In an interview some 50 years later, Sands said, yes, indeed he was the one who typeset the poem. Some have said that’s impossible: a 14-year-old couldn’t possibly do such skilled work. Others argue that 14-year-olds in 1814 were far more competent than they are now. The apprentice — and some say, most likely, the publisher — made changes. They added the exclamation mark after “O” in the opening line. They capitalized. And, oddly, they changed “rocket’s” to “rockets’” and “bomb” to “bombs.”

So Francis Scott Key wrote what was to become the National Anthem, as a poem, handwritten on the back of a hotel stationary page. Somebody delivered the handwritten version of the poem to the local newspaper, the Baltimore American and Commercial Daily Advertiser, which had suspended publication during the battle. So everyone is gone due to the British attack. Except that is, 14 year old apprentice, Samuel Sands.

Everyone had apparently thought that Key had been killed, or otherwise missing, since nobody had heard from him in eleven days. “We were becoming uneasy about him, when, to our great joy, he made his appearance at my house, on his way to join his family,” wrote Roger B. Taney, his brother-in-law. In passing, Key mentioned to him that, “under the excitement of the time, he had written a song.”

14 year old Samuel then typesets Key’s poem in less than an hour. He then struck off what was called a “Broadside” – a sheet of paper printed on one side – sort of like a flyer or poster today. Sands and an assistant made fifty-nine editorial changes to Key’s original handwritten poem, including grammar, punctuation marks, and capitalization. He printed off 1,000 copies. Only 2 copies are known to survive: one held by the Library of Congress, and another at the Pennsylvania Historical Society.

Francis Scott Key was not a musical person; nor did he designate a tune for the words of the poem. The newspaper print actually listed a melody as a parody, sort of like something you would see on Facebook today. The melody was listed: “Tune – Anacreon in Heaven.” You can read this in the photo, between the first paragraph and the first verse.

The tune, “Anacreon in Heaven,” by John Stafford Smith, was already well known in the United States, and Key’s words sung to the tune gained popularity almost immediately.  The words were reprinted in newspapers in Baltimore on September 20 and 21.  By September 27 the words had traveled some forty miles to the southwest, appearing in the Washington newspaper National Intelligencer.   Within several weeks, probably by October 19, the words and music were joined together in print for the first time, in a sheet music edition printed in Baltimore by Thomas Carr, at the behest of Key himself.  It is generally believed that Carr was responsible for retitling thesong “The Star-Spangled Banner.”

In 1931, president Herbert Hoover signed the law that designated “The Star-Spangled Banner” as the national anthem of the United States.  It is almost universally familiar.  But after observing the anniversary of its composition, let us recall Francis Scott Key’s second verse: ” ‘Tis the star-spangled banner; O, long may it wave!”

Anyways, back to the trunk. These were the contents:

This is a framed photo of Samuel Sands, found in the truck. On the back, it has his name, and information on where he is buried. As far as I can tell, this is the only known photo of him. My Google Fu didn’t locate anything on the internet.

The Baltimore Sun published his obituary in 1891, of which I found this excerpt:

“Mr. Samuel Sands of the American Farmer (newspaper), one of the oldest and most widely known newspaper men of Baltimore died at the residence of his son., William B. Sands at Lake Roland, yesterday after a long illness. He was born April 10,1800 in Annapolis Maryland and with his mother, who was left a widow with several children and limited means removed to Baltimore in 1811.

“Within two days after Young Sands found himself apprenticed to learn the printers trade in the office of the Whig a daily paper then issued here…. “It was during his apprenticeship that he put into type Francis Scott Key’s ‘Star Spangled Banner’. The manuscript was handed to him all the older hands being in the earth works expecting the British attack on the city, and set it up in the shape of a hand bills which was then distributed by him throughout the city…..

“For about 60 years he was a member of the Christian Church or Disciples., a people following the religious lead of Alexander Campbell. During the later years of his life, he attended the First Christian Church] corner of Fremont and Harlam Avenue (Baltimore),….. “Mr. Sands married in 1819 Sarah Buckler Innes, and eight children resulting from the union, only one William B. Sands survives. In 1853 he married Anna J. Buck. widow of John Buck of Baltimore County who left one daughter Anna, now wife of Horace M. Harriman of this city. .. ..

“In person Mr. Sands was of medium height and weight with no physical indication to account for his great longevity, being of rather delicate health most of his life…. “The flag of the City Hall was ordered at half mast, out of respect for Mr. Sands…”

The other photos are of other Sands family members. William B. Sands, his son, and only surviving child (according to the obituary above):

Florence M. Sands. I believe this is William B. Sands’ wife, so Samuel’s daughter-in-law….

Frank Newcomer Sands. This is a son of William B. Sands and Florence M. Sands, so Samuel’s grandson. It may have been through him to whom this trunk was passed….

The trunk itself is covered in a fur hide – though it’s hard to tell without looking closely.

It has brass tacks along the trim, and dozens of tiny nails, which likely explains what I’m looking at when I find these tiny little nails at sites I’m digging….

A better look at the clasp and locking mechanism. If you look closely, you’ll see the British crown stamped on the lock cover.

A better look at the horsehide, as well as an old repair on the side.

A pic showing the construction of the solid wood box:

The trunk is covered on the inside with actual pages from the newspaper which Sands was apprenticed-to, the Baltimore American and Commercial Daily Advertiser, from the 1811-1814 era, which in and of itself is extremely fascinating.

You can spend half a day just reading the old articles and advertisements.

A new stagecoach opportunity: only a 15 hour ride between Baltimore and Philadelphia. And you get to bring 14 pounds of baggage!

An admiralty lawsuit out of Georgia….

“Wanted immediately, about Fifteen Young Negro Slaves, Male and Female, from ten to twenty years old: for which the highest price in cash will be paid. Apply at this office.” Wow, sobering.

Above that, on part of the trunk lid, there’s discussion of an Indian treaty with Gov. Harrison (William Henry Harrison): “The inhabitants of this territory have been very much alarmed from the hostile appearance of the Indians; so much so, that . . . .”

This refers to the Shawnee, and the confederacy being secretly built by Tecumseh and his brother, one-eyed prophet, which ended poorly for the Shawnee, as history tells us. It ended up ending poorly for Harrison too. He gained fame, and even the Presidency. But caught ill by giving his inauguration speech in the rain in Washington D.C., and died shortly thereafter…..