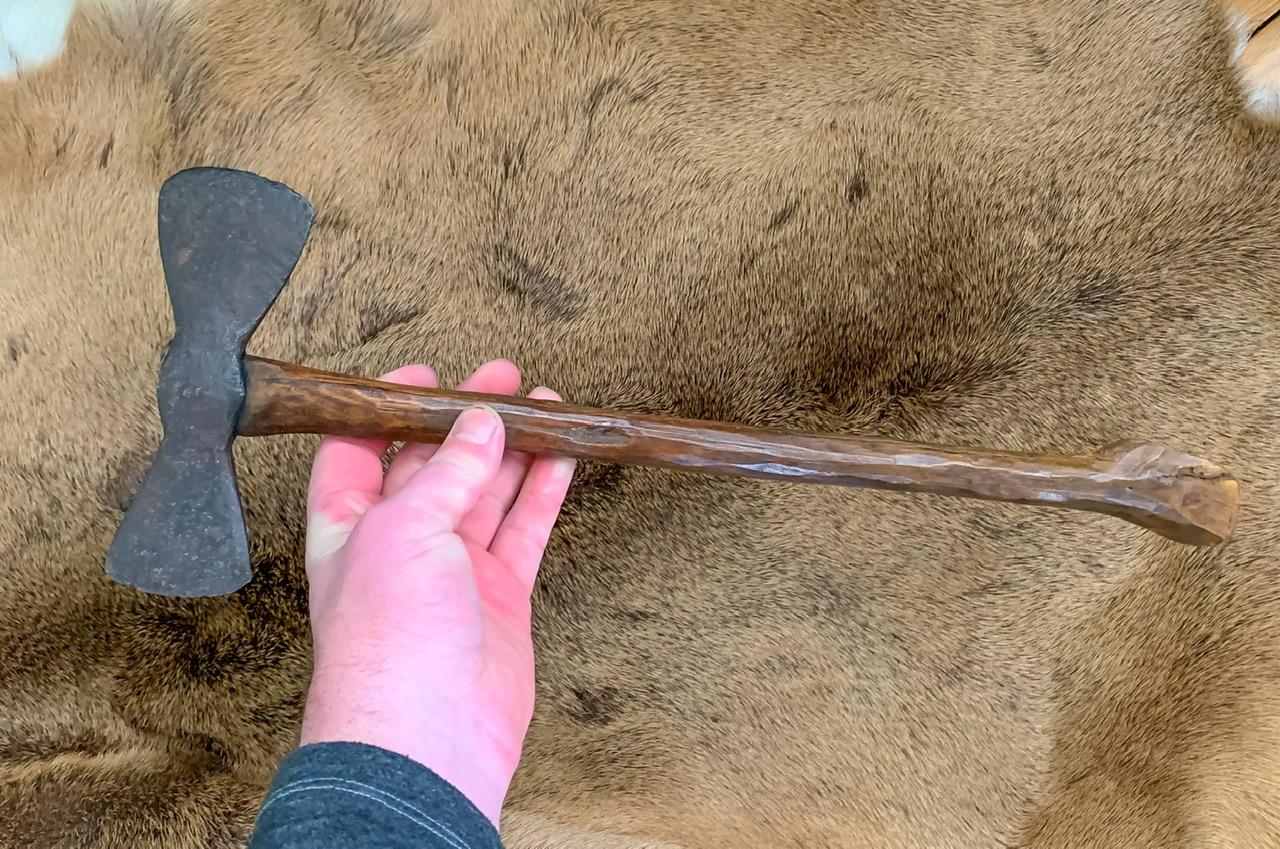 There were apparently log huts/cabins at the site, which after being abandoned by the Wyandots living there, were found and used by the first white settlers entering the area in the early 19th century. This is the actual site:

According to the 19th century book, “History of Logan County and Ohio,” this was the site of a Wyandot village, which was for a period home to the famous Chief Tarhe, the “Crane,” who fought with Cornstalk at the Battle of Point Pleasant:

Near the southern boundary of the Township (of MacArthur?), on lands now owned by A.C. McClure, Esq., is the site of the ancient Indian village of Solomon’s Town, which tradition states was, prior to the dawning of the present century (prior to 1800), a populous community of the Wyandots. The name was given to it in honor of a venerable chief of the nation who resided at this point. History records the fact that, in about 1800, Tarhe, or the Crane, chief of the Wyandots, had an abiding place here.

The residence of Mr. McClure is situated near the center of the former village, immediately across the pike, which, by the way is constructed on “Hull’s Trace,” is an extensive gravel ridge of a nearly uniform height, extending in a northwesterly direction. Not far from the southeastern extremity of this elevation is a circular mound of about 100 feet in diameter, a perfect oval, surrounded by a ditch, the bottom of which is at least six feet lower than the summit of the mound.

Here’s a satellite image of the site. Apparently the historical marker is now gone. But this is where it once stood:

The exact location of the site is described in the 1880 local history book:

Still farther to the northward the land is level for some distance, and along this the unfortunate prisoners were compelled to run the gauntlet . . . . To the south of the mound at the distance of some twenty-five rods, stands the blackened and tottering remains of the large elm tree under which, local traditions puts it, Simon Kenton was a second time placed in captivity.

Antrim’s history of Logan County states, after the life of Kenton had been saved by that notorious renegade, Simon Girty, in whose whole life this one act is the only white spot, he was clothed, furnished a horse and equipments, and in company with his benefactor, roamed about the country. After some time spent in this manner, a war party of Indians returned from an expedition to Wheeling, where they had suffered defeat and the loss of several warriors, killed and wounded, and full of revenge, “determined to kill any of the whites who came within their grasp.” Kenton was the only white man near, and being at Solomon’s Town, with Girty, a messenger was sent to him (Girty), requesting his immediate attendance at a grand council to be held at Wapatomica, and that he bring Kenton with him.

A few rods east of Mr. McClure’s residence is the immense spring spoken of in connection with Solomon’s Town. In this vicinity for many years was held the annual muster of the militia, events upon which the few surviving ex-militia delight to dwell, recounting with much evident satisfaction the many bloodless battles fought on these occasions.

Some five years since (1875?), when the Miami turnpike was being constructed, the workmen engaged in hauling gravel from the northern extremity of the gravel ridge, unearthed a great number of human bones, which from their size indicated that the original owners were people of immense stature. Numbers of copper beads were also found, and one fine specimen of a stone pipe.

So Simon Kenton had been captured by the Shawnee while trying to steal horses from the village of Chillicothe, and was captured. Girty smuggled him out of their custody for a while; but he was still a prisoner, and just didn’t realize it. They knew where he was, and recalled him from Girty’s headquarters at Solomon’s Town. Girty had no choice in the matter. Kenton’s account of what happened next after arriving at the village of Wappatomika was not good:

They found the dread council already assembled in the familiar council house. Girty was received courteously enough, but when Kenton offered his hand to those who but a few weeks before had called him “Brother,” it was refused successively by all, and finally he gave up in despair, realizing his situation had dropped once more into the dangerous state, and that he was again a prisoner.

Immediately upon their arrival the orators began their speeches, the first to speak being the chief of the defeated raiders, who demanded Kenton’s life in payment for those of his slain warriors. Girty spoke again for his friend, and others then spoke in anger, accusing him of assuming too much authority for a man who had been but six months among them; when the vote was taken, the war club thundered on the earth. Girty turned to Kenton, who stood dumbfounded at the swift verdict, and said despairingly, “Well, you must die! I can do nothing more.”

Simon was condemned to burn at the stake. Girty was at least able to persuade them to burn Kenton at Sundusky, where the British were soon to distribute gifts, fifty miles away, at Detroit. Girty wisely suggested that burning Simon there might bring even more presents. This bought additional precious time, which Girty used to eventually buy Kenton’s freedom once at Detroit. But the trip to Detroit was not easy for Kenton. And the entire time, he believed he was facing a brutal death:

The Indians were in deadly earnest now and five guards started with him without delay, they on horseback and Kenton, with his arms pinioned and a rope about his neck, driven before them on foot. They had not gone three miles from Wappatomika before Girty passed them on his way back to Solomon’s Town, telling Kenton, as he went by, that he hoped to be able to do something for him there. Whatever his plan was – if indeed he had any – it failed, and Kenton did not see him again.

As if this captive’s cup of anguish were not already full, as if it were not enough for him to be marched through Solomon’s Town without seeing his friend and to know by that sign that Girty could in truth do no more, another terrible injury was soon inflicted on his newly healed body. Stopping to drink at Silver Creek a few miles this side of the town, “a small stream scarcely large enough to turn the wheels of a carding machine,” Kenton was the first to rise and, quite without conscious intention of any sort, stepped across the little rivulet and sat down on the opposite bank to wait for the others. At this movement without orders one of the Indian guards raised his war club and struck him so violently on the arm that he fractured it. For eleven days, until he reached Detroit, Kenton was to march by day, be stretched out at night, run the gauntlet, and be tied to the stake with this unset arm the source of a physical agony almost too great to endure.

Kenton never saw Girty at Solomon’s Town because Girty had ridden ahead towards Detroit and financed a deal for local traders to purchase Kenton’s freedom with what must have been a substantial amount of expensive trade goods. From Detroit, Kenton eventually made it back to Kentucky to continue his adventures.