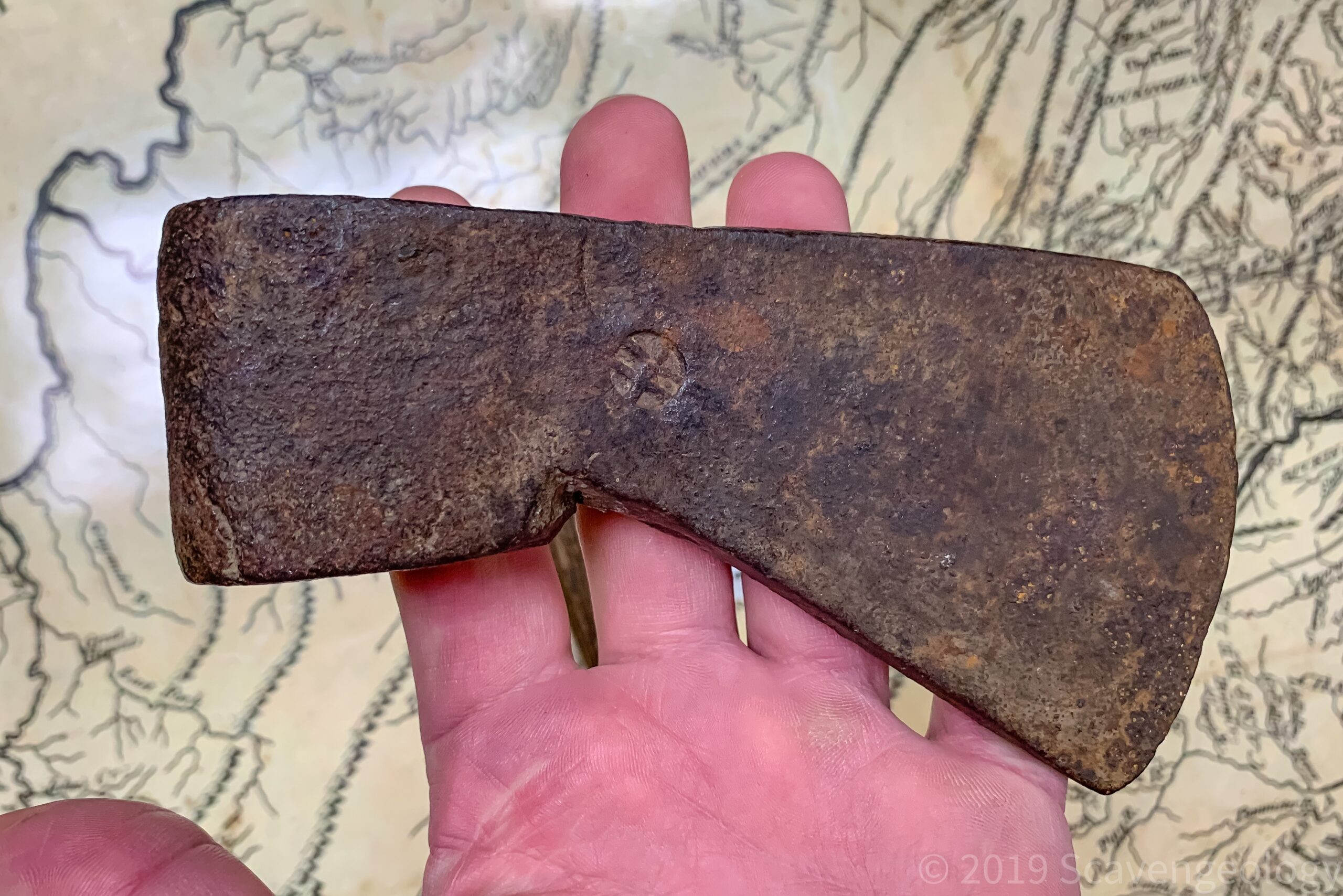 As early as 1608, John Smith, of the English Jamestown settlement, discovered that some natives around coastal Virginia were already armed with French metal axes. The Tockwoghes, the tribe in possession of the axes, testified that they had obtained the implements from the Isquesahanocks. Smith visited this tribe also and was informed that their iron tools and weapons came from the quanahucke and the Massawomekes, of the Iroquois, who were direct touch with the French traders on “the river of Cannida.”

[NOTE: don’t forget to SUBSCRIBE for email updates, at the bottom of this page, so you can share with friends and family who don’t do Facebook or WordPress….]

“The French Biscayne trade axes are the oldest style of metal axe we know of trade in North America . . . . Records show Biscay hatchets being traded to American Indians by the Spanish as early as 1520’s – 1540’s; the French from about 1560-1750’s; and the British from 1674-1690’s?” See https://www.furtradetomahawks.com/biscayne-trade-axes—9.html

One defining characteristic of these early trade axes is the oval, or ovalish, shape of the eye – which is where the wood haft is attached. Here, the eye is oval, but it’s been pounded flat on this end.

With the Spanish military came explorers and tradesmen. They learned quickly that knives, axes, and tools, basically anything metallic, had great value to the Native Americans. A stone age population was enthralled with the ease in which metal tools could make their life easier – from construction of wigwams, scraping hides for clothing and footwear, carving and cutting, making bowels and cooking utensils, hunting game, and in war. With a stash of ‘cheap’ and inexpensive implements and weapons on hand, Spanish tradesmen quickly discovered that they could garnish a wealth in furs and other goods highly profitable in Europe. Among these early explorers and traders’ supplies were large quantities of Biscayne iron axes. We know how important these early Biscayne axes were to the Native Americans because archeological digs often find them at burial sites.

A Biscayne axe was based on the European hatches similar in design to the early Franziska and Fokos of short handles which were worn at the belt. These Biscayne axes were mass produced entirely for trade in the New World. They weighed from one to two pounds with a round or egg-shaped eye (top of the blade into which the handle was fitted), short bit (opposite blade), no poll (opposite the blade edge) as the metal was wrapped around the handle, and, like the European models, a short handle. The iron used to make them was mined in the Bay of Biscay region of northern Spain and southwest France, hence the name.  The handles were usually a simple rounded sapling or branch that fitted through the eye. They first appeared throughout southern and southwest America, but by the mid 1500’s, had made their way all along the American coast and into the interior by way of Basque and French fishing fleets visiting Newfoundland. By the late 1500’s and early 1600’s, the Biscayne axes would morph into what was known as the Hudson Bay axe or French trade axe.

This perspective gives a better view of the eye shape. I guess you could say it’s “ovoid.” Oval, but slightly more narrow at one end.

A “Biscayne axe” is more hatchet than axe.  It weighed about 1 lb. or less having a round or egg-shaped eye, no poll, and a short handle.  The handles were usually a simple rounded sapling or branch that would fit through the eye.

They were referred to as “Biscayne” axes as they were made from iron mined in the Bay of Biscay region of Spain and France.

The Spanish traders brought these axes first into the American Southeast.  They made their way to the Northeast via Basque and French fishing fleets visiting Newfoundland beginning in the mid-1500’s.

These “axes” were made entirely for trade.  There was no use for these small hatchets in Europe.  They were too small for felling or splitting.  So what did the Native American use the trade axe for?

The Biscayne axes could have been used to cut and trim saplings to make wigwams and other bark covered structures.  Of course, they could also be used as a weapon.  We know how important the Biscayne axes were to the Native Americans because these axes were often found at burial sites.

This particular axe head was dug at Lake George, New York. It has a double cross type maker’s mark on it, known as the Cross of Lorraine. Supposedly these Double Cross marked axes were traded to the Indians in the early 1600’s, and are similar to the axes brought by Champlain to trade with the Hurons, prior to the Iroquois Massacre, 1615-1638. Another one I found online, sold by Cowan’s Auctions, measured 7″ x 1.5 x 3.25″.

I saw another one identical to this one, online here: https://www.worthpoint.com/worthopedia/jesuit-biscay-trade-axe-1575-1670-20711279 And here’s yet another, which was auctioned by Cowans:

Below is a chart from an old French book, provided by Canadian Heritage officials, to show marks on early French axes found in the Quebec area. They couldn’t confirm the identity or exact date of any of them, but noted that they could have been made in France, or in New France. The double cross mark is included at no. 2. No. 3 is, I believe, the mark from the next axe shown below, dug in upper New York State.

Here is an old Biscayne trade axe with a sticker noting that it came from (obviously dug) “upper NY.” It does have the remnants of a maker’s mark, which I believe is the most common one I’ve seen – no. 3 on the chart above.

This axe, dug somewhere in “upper New York,” is about an identical shape. It’s pitted so badly however, that it’s difficult to make out the maker’s mark. But you can tell there’s one on it, and it does appear to be the no. 3 mark.

A couple other old axes while we’re at it…. This is another interesting forged axe we found, with a flared blade. No marks, but there’s been others found of similar shape.

This interesting axe has marks on both sides. This is a similar pattern to the Biscayne axes, but it has a round eye, and an elongated blade. This is more of a “Missouri War Axe” pattern, but also has the same old general design – minus the oval eye. I’d love to know if anyone can ID the marks. I assume one is the maker, and one is the owner.

“MTC” on one side, upside down.

NOTE: I really appreciate the comments. Please feel free to comment, even if it is to debunk some misinformation I’ve provided. It wouldn’t be the first – nor the last time I’ve done that. I have it set for comments to be approved because there is an insane amount of spam comments, and it would fill up in a couple hours with links to all sorts of nonsense….. I believe that once you post once, you’re already preapproved for others?….

A few more. . . . A classic Biscayne with a nice known mark:

A new one we have up for sale in the shop from Lake Champlain area of Vermont:

The following are not “trade axes,” but early style tomahawks from the same general time period, or the transition period, which show flared blades:

Original all-metal halberd style tomahawk with a flared blade, not far off from the period illustrations:

It looks like a Missouri War Axe, per se, but it has the mark of Samuel Wilson, circa 1784 – at least according to the old tag. Old haft and tacks, though I’m not sure how old.

This article notes that this particular axe head was found on Laramie Creek, near the Pickawillany village site in Ohio. It has a touch mark of “B” who may refer to a blacksmith named Thomas Burney, “who lived a number of years among the Miami Indians and who by 1752 had ‘probably moved his forge to Pickawillany on the Great Miami River.'” It’s said that his touch mark has been found on a number of trade axes found near Piqua, Ohio.

Other “B” marked trade axes recovered in Ohio:

Axes found at the Battle of Peckuwe site, 4 miles west of Springfield, Ohio:

Check out the post I did on a new find which is surprisingly similar to our early Jamestown axe: the Mullet-poll Murder Hatchet. This post kind of takes off where this one left off, exploring the styles and possibilities of early iron hatchets / belt axes:

Another thing I realized yesterday in researching Spain’s foray into Tidewater Virginia in the 16th century, is that they were trading Spanish “hatchets” to the Natives, and the head Jesuit priest there, Father Segura, was murdered with his own hatchet by Don Luis, an English speaking former captive of the Spanish. This could explain the unique style of these early little blades. Read more about the Spanish ordeal in Virginia, and artifacts found near there, towards the end of this new post:

We got a new Biscayne Axe find from Addison, Vermont. Check it out: