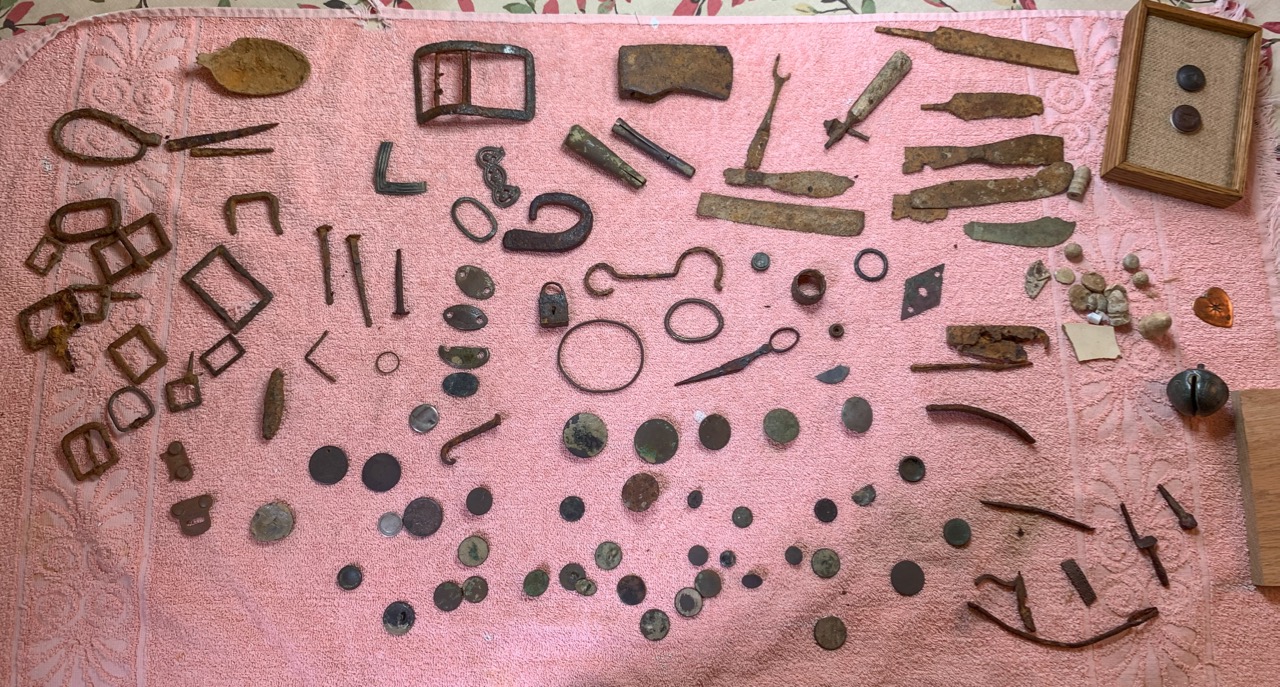 Recently, a friend of mine, Bill Burns, happened upon an early log cabin site just North of Union, West Virginia and Byrnside’s Fort. After finishing most of the preservation work on the items, he let me go through and photograph them. Sites like this provide interesting information on the lives of people in what was the remote frontier in the 18th century. It always blows my mind that you find these large fancy shoe buckles on the frontier, among other things.

The site is included in the below photo, showing the town of Union looking north, and slightly to the east. This would be looking towards the Greenbrier River and the rest of the Greenbrier Valley. The area around what would eventually become Union (created in 1799/1800 to have a county seat for the newly-established Monroe County, carved out of Greenbrier) was known as “the Sinks,” later the “Sinks of Monroe.” This was due to the fertile and porous limestone soil. Most of the Greenbrier Valley is much the same.

These items tell us a lot of about early frontier life in the southern Greenbrier Valley. My favorite is a little belt axe, long missing its haft. Also, an “artois” style shoe buckle, bits of other fancy shoe buckles, an assemblage of different type of 18th century brass buttons, fancy horse saddle guides, engraved and constructed of brass, as well as many other interesting items. The site appears to have disappeared very early into the 19th century, and was near the site of another log cabin, probably built afterwards, which is itself long disappeared.

And here’s the recent one Bill found at the new site:

Here are some of the engraved brass “saddle guides” found at Byrnside’s Fort:

And here are three of them found at the new site:

This find from the new site doesn’t look like much, but this is actually a rare find. This is a little chisel/punch with spikes on the end used in the stitching of leather, such as in the case of creating frontiersmen style clothing, such as deer skin clothing and moccasin footwear. The user would hammer onto the tool from the rear, and it would imprint the stitch marks on the clothing. They would they have to further sew the holes by hand.