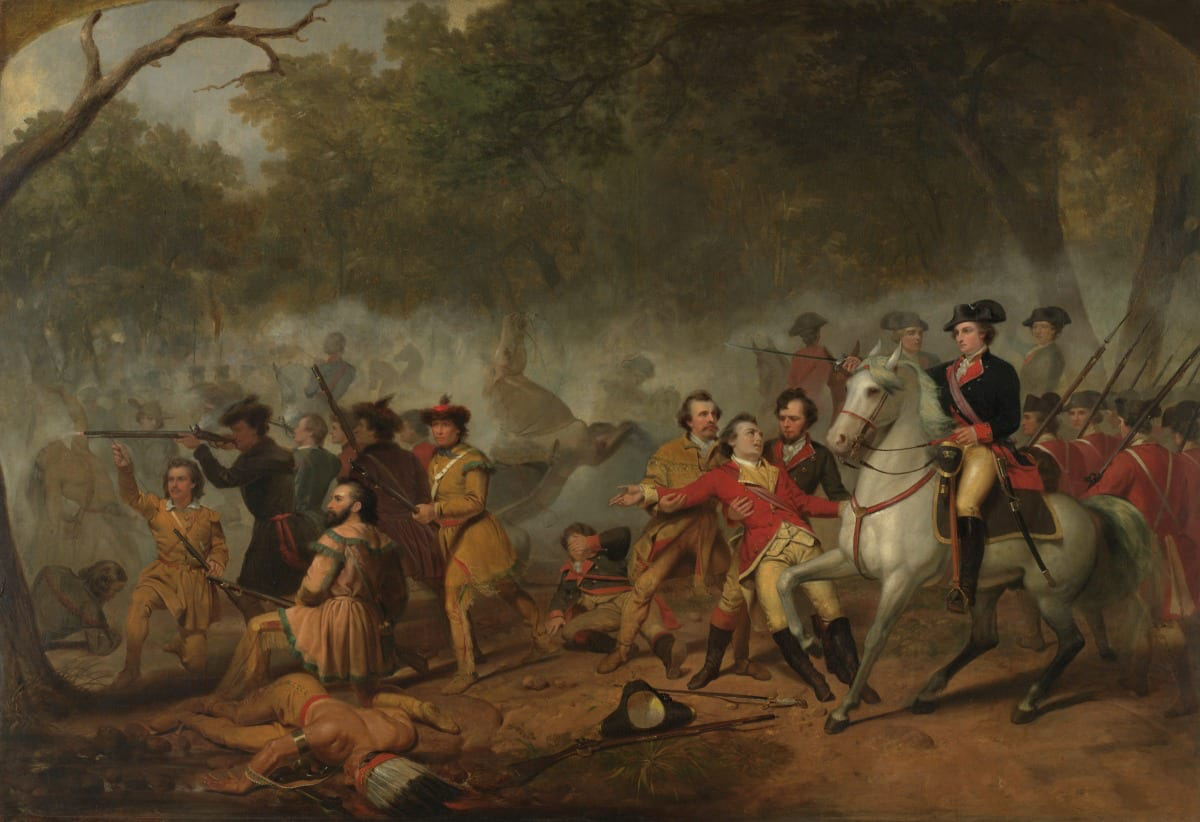 I stumbled across one of George Washington’s handwritten letters on the internet. When you read his words in his own handwriting, it gives you a different version of him. This was French-Indian-War-Washington, rather than the General Washington of the Revolution.

In his letter to the Virginia Governor, of which there are many, he complains about the British treatment of the Virginia Regiment soldiers as less-than-British, essentially. It’s an early insight to the formation of his views about England, and colonial independence. Washington was a highly-connected politico, with business connections to Dinwiddie, who like other colonial Virginia governors, was invested financially in western land speculation.

Royal Governor Robert Dinwiddie, George William Fairfax, George Mason, and George’s half-brothers Lawrence and Augustine Washington were all shareholders in the Ohio Company. Founded in 1749, the Ohio Company was created to help encourage settlement and development of the vast Ohio Valley. Granted 200,000 acres (with the potential for an additional 300,000 acres) between the Kanawha and Monongahela Rivers, the Ohio Company shareholders were economically threatened by the French incursion into these granted lands. In addition to the larger geopolitical issues at stake, the principal shareholders of the Ohio Company, George Washington included, were also personally motivated to push the French out of the region.

Here’s the text of his letter, which argues the virtues and the hardships of his men:

We may I think with great Propriety and Justice represent.

That—The Virginia Regiment was the first in arms of any Troops upon the Continent, in the prest War. That—The three Years which they have Servd has been one continued Scene of Action. That—whilst other Troops have an agreeable recess in Winter Quarters, the Nature of the Service in which we are engagd, and the smallness of Our Numbers so unequal to the Task, keep us constantly in Motion—That nevertheless, all these Services have hitherto been performd with great Spirit and cheerfulness but That continuing in a Service precarious and uncertain: hazarding Life Fortune & health to the chances of War, for the present, and a bare Subsistance, is matter for serious, and melancholy reflection: It tends to promote langour and Indifference: It sickens that laudable and generous Emulation so necessary among Troops: It is nipping in the bud our rising hopes. Hopes that we have been led to cherish: It is discouraging to Merit, and, I can’t help repeating, that it is in the highest degree dispiriting to the Officers, more especially those, who, having thrown themselves out of other employments are now to look forward and see, that they are wasting the Prime of their Lives and Constitutions in a Service the most uncertain, and Precarious: In which they can expect to be continued no longer than hard blows, and continual Dangers require their Aid. and when those Causes Cease, are then dismissd, perhaps in a State of disability and Indigence from wounds, &ca.

These are reflections that must have due weight in every Breast, but the Idiots and Madman’s, and have made Our Officers anxiously Solicituous to know their Fate—at once—and the full extent of their Dependances, that they may regulate their conduct accordingly. We cant conceive, that being Americans shoud deprive us of the benefits of British Subjects; nor lessen our claim to preferment: and we are very certain, that no Body of regular Troops ever before Servd 3 Bloody Campaigns without attracting Royal Notice.

As to those Idle Arguments which are often times us’d—namely, You are Defending your own properties; I look upon to be whimsical & absurd; We are Defending the Kings Dominions, and althô the Inhabitants of Gt Britain are removd from (this) Danger, they are yet, equally with Us, concernd and Interested in the Fate of the Country, and there can be no Sufficient reason given why we, who spend our blood and Treasure in Defence of the Country are not entitled to equal prefermt.

Some boast of long Service as a claim to Promotion—meaning I suppose, the length of time they have pocketed a Commission—I apprehend it is the service done, not the Service engag’d in, that merits reward; and that their is, as equitable a right to expect something for three years hard & bloody Service, as for 10 spent at St James’s &ca where real Service, or a field of Battle never was seen.

If it shou’d be said, the Troops of Virginia are Irregulars, and cannot expect more notice than other Provincials, I must beg leave to differ, and observe in turn, that we want nothing but Commissions from His Majesty to make us as regular a Corps as any upon the Continent—Because, we were regularly Enlisted attested and bound, during the King’s or Colony’s Pleasure—We have been regularly Regimented and trained, and have done as regular Duty for upwards of 3 Years as any regiment in His Majesty’s Service—We are regularly and uniformly Cloathd; Officers & Soldiers—We have been at all the expence that regulars are in providing equipage for the Camp—and in few words I may say, we labour under every disadvantage, and enjoy not one benefit which regulars do.

How different from Us, the Establishment of all other Provincials is, may easily be discernd by considering,7 that they are raizd for a Season—assembl⟨ed⟩ in the spring and are dismissd in the Fall. consequently are totally ignorant of regular Service—They know their Dependance, and had nothing to expect; therefore coud not be dissappointed. They are never cloathd, and are at little expence, as they act as Irregulars8 and paid exorbitantly. There remains one reason more, which of itself, is fully sufficient to obviate scrupples: & that is—we have been in constant Pay, & on constant Duty since the commencement of these Broils, which none others have.

And we flatter ourselves, it will evidently appear, that the Advantages gaind by the Enemy, and the Ravages committed on our Frontiers are not owing to the Inactivity of the V. Regt In proof of which, we appeal to the many bloody Skirmishes with the Enemy last Campagn to our Beha[viou]r at Monogahela, & Services in the Campaign of 1754; To the number of Officers & Men killd in Battle, &ca &ca.

Recountg these Services is highly disagreeable to us—as it is repugnant to the Modesty becoming the Brave, but we are compelld thereto by the little Notice taken of Us—It being the General Opinion, that our Services are slighted, or have not been properly represented to His Majesty: otherwise the best of Kings woud have graciously taken Notice of Us in turn, while there are now Six Battalions raizd in America, and not an Officer of the Virginia Regiment Provided for. notwithstanding many of them had distinguishd themselves in the Service before Orders were Issued for raizing one of the Battalions above mentiond. Whereas, the disregarding the faithful services of any Body of His Majesty’s Subjects, tends to discourage Merit and lessen that generous Emulation, spirit, and laudable ambition so necessary to prevail in an Army and which Contributes so much to the Success of Enterprize.

I, in behalf of the Officers of the Virginia Regt beg, that your Honour will be pleas’d to take their Case into particular Consideration, and as they think themselves particularly entitled to your Honours Patronage, give them Reason by your earnest endeavours with His Lordship, to hope for a Soldiers reward, and redress their Grievances in whatever manner shall seem to your Honour most conducive to their Interest, and His Majesty’s Service—We are all Sensible, that nothing but earnest application can obtain promotion, while there are so many dependants; & we now hope, as justice and equity are clear on our side, and as this seems to be the Crisis of our Fate that no stone will be unturnd to bring this abt. I am Honble Sir Yr most Obedt Hble Servt

Washington really wanted a commission in the British army, rather than in the Virginia colonial militia. But he was missing the real value of his efforts during this period: experience which would later qualify him to lead the Continental Army during the Revolution.

George Washington, who had been a part of two failed efforts to take Fort Duquesne, commanded the Virginia militia forces attached to Brig. Gen. John Forbes’s expedition against the French stronghold at the Forks of the Ohio from 1757-1758. Commanding a strong force of almost 2,000 British Regulars and 5,000 colonial militia, Forbes chose to drive westwards along the southern border of Pennsylvania instead of along the more southerly Braddock road – the path that Washington has strongly recommended.

Operating from the recently established Fort Ligonier, Colonel Washington’s Virginians participated in a number of operations in the area east of the French position. On November 24, 1758, Washington led his troops on an advance that occupied the smoking ruins of the abandoned Fort Duquesne. After almost five years of hard marching, combat, and countless setbacks, Washington was finally able to stand at the British controlled forks of the Ohio.

Later, during the Revolutionary War, the Virginia rifleman from the western ranks of the militia, would be an important part of his army. While he complained in his letters back in the 1750s about the lack of discipline among the frontier militia, he would learn to appreciate their skills a few decades later.