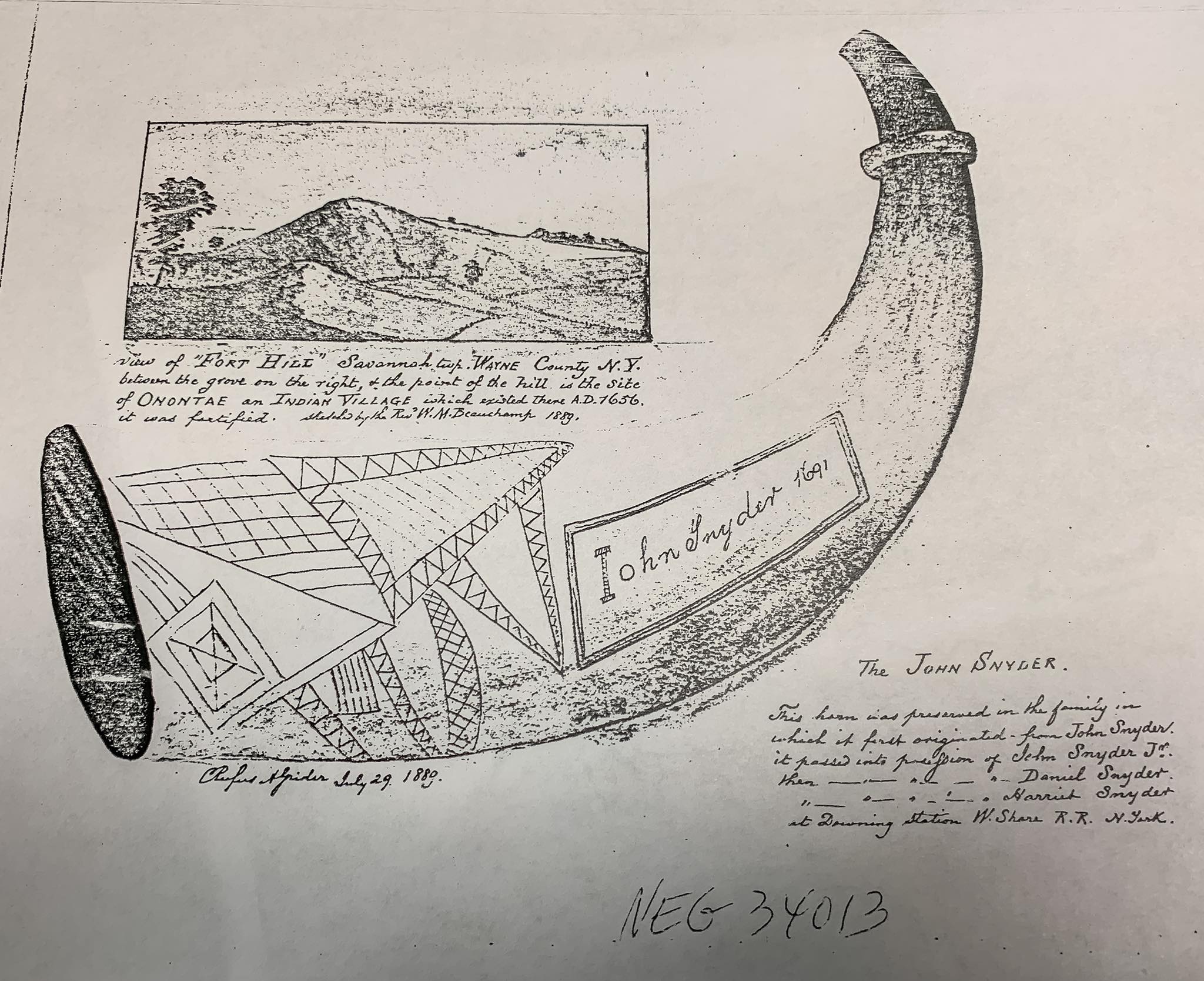 Usually 6th grade history classes end up discussing England’s Glorious Revolution of 1688 , and the consequences in the New England colonies, where the King attempted to control and abuse the colonies. That’s about where they start to fall asleep. But what do you bet they would pay attention if showed them some tangible combat gear from the events…..

Here is a real piece of that period’s American history. This powder horn belonged to John Snyder from the Snyder family of New York. He carved his name, as well as the year 1691 into this horn, and scratched numerous designs and cross-hatching. It is difficult to see in the photos, and much of it is too worn to determine what it says or represents. The year is most likely a reference to involvement in the Jacob Leisler revolt and execution in 1691. Fortunately for our eyes’ sake, there actually exists an 1880 drawing showing the scrimshawing on this powder horn:

1680-1691 was a turbulent period in the New York colony, with Indian attacks and political upheavals. It may be the most epic and dramatic story you never learned in history class…

Jacob Leisler (ca. 1640 – May 16, 1691) was a German-born colonist in the Province of New York. He gained wealth in New Amsterdam (later New York City) in the fur trade and tobacco business. In what became known as Leisler’s Rebellion following the English Revolution of 1688, he took control of the city, and ultimately the entire province, from appointees of deposed King James II, in the name of the Protestant accession of William III and Mary II.

Beginning in 1689, Leisler led an insurrection and seized control of the city by taking over Fort James at the lower end of Manhattan. He took over control of the entire province, appointing himself as acting Lieutenant Governor of the Province of New York, which he retained until March 1691, refusing to yield power until the newly appointed governor himself finally arrived. While Leisler claimed to have acted to support the Protestant accession against Jacobite officeholders in New York, he was arrested by the newly appointed governor of New York in March 1691. With opponents active against him, he was condemned and executed in New York City for treason against the English monarchs William III and Mary II. His estate was forfeited to the Crown.

The English Revolution of 1688 also played out in New York, where people of a wide variety of religious and ethnic backgrounds divided into two well-defined factions. In general, the small shopkeepers, small farmers, sailors, poor traders and artisans allied against the patroons (landholders), rich fur-traders, merchants, lawyers and crown officers. The former were led by Leisler (himself a wealthy man), the latter by Peter Schuyler, Nicholas Bayard, Stephen Van Cortlandt, William Nicolls and other representatives of the aristocratic Hudson Valley families. The Leislerians claimed greater loyalty to the Protestant accession.[5]

In 1688, Governor Dongan was succeeded by Lieutenant-Governor Francis Nicholson. In 1689, the military force of the city of New York consisted of a regiment of five companies, with Leisler as one of the company captains. He was popular with the men and was probably the only wealthy resident in the province who sympathized with the Dutch lower classes. At that time, the latter were agitated owing to the attempts of the Jacobite office-holders to retain power in spite of the revolution in England and the accession of William III and Mary II to the throne.[2] When news was received that Governor Sir Edmund Andros had been imprisoned in Boston by the opposition, the Leislerians took possession, on May 31, 1689, of Fort James at the southern end of Manhattan Island. They renamed it Fort William and announced their determination to hold it until the arrival of a governor commissioned by the new sovereigns.[5]

On a report that supporters of King James II were about to seize the fort and massacre their Dutch fellow-citizens, an armed mob gathered on the evening of 2 June 1689 to overthrow the existing government. The cry of “Leisler” was raised, and the crowd rushed to his house. At first, he refused to lead the movement, but when the demand was reiterated he acceded, and within an hour received the keys of the fort, which had been seized. The revolutionaries took advantage of the fort containing all the public funds, which return Lieutenant Governor Nicholson demanded in vain.

Four hundred of the new party signed an agreement to hold the fort “for the present Protestant power that reigns in England,” while a committee of safety of ten of the city freeholders assumed the powers of a provisional government, of which they declared Jacob Leisler to be the head. They commissioned him as “captain of the fort.” In this capacity, he began to repair the fort, strengthening it with a battery of six guns beyond its walls. This was the origin of the public park known as the Battery in Lower Manhattan.[2] Thus began Leisler’s Rebellion.

Albany held out against Leisler’s authority for a time. In November, Leisler sent Jacob Milborne to Albany with an armed force to assist in its defense against any Indians. Milborne was directed to withhold aid unless Leisler’s authority was recognized. This was refused, and Milborne returned unsuccessful.[2] But after the destruction of Schenectady on February 19, 1690, by the French and their allied Indians, Christian Mohawk among them, Albany submitted to Leisler’s authority.

Leisler summoned the first Intercolonial Congress in America, which met in New York on May 1, 1690, to plan concerted action against the French and Native Americans in the ongoing conflict in North America.[5] The congress planned an expedition against Canada. It equipped and dispatched against Quebec the first fleet of men-of-war ever sent from the Port of New York. However, the expedition was unsuccessful.

On January 28, 1691, English Major Richard Ingoldesby, who had been commissioned Lieutenant Governor of the province, landed with two companies of soldiers in Manhattan and demanded possession of Fort James. Leisler refused to surrender the fort without an order from the king or the governor. After some controversy, Ingoldesby attacked the fort on 17 March, during which Leisler’s forces killed two of his soldiers and wounded several.[5]

When Governor Sloughter finally arrived in New York the following March, he immediately demanded Leisler’s surrender. Leisler refused to surrender the fort until he was convinced of Sloughter’s identity and the governor had sworn in his council. As soon as the latter event occurred, he wrote the governor a letter resigning his command.

Sloughter responded by arresting Leisler and nine of his colleagues, including his son-in-law Jacob Milborne. All but Milborne were released after trial. Leisler was imprisoned, charged with treason and murder. Shortly afterward he was tried and condemned to death. His son-in-law and secretary, Milborne, was condemned on the same charges. Leisler’s son and other supporters were outraged by the trials, as they were considered unjust. The judges were the personal and political enemies of the prisoners, and their acts were described as “gross.” [2]

Governor Sloughter was said to have hesitated to sign the death-warrants, but was trying to stabilize politics in the colony and did not have sufficient influence among the elite of New York City. He was said to finally sign the warrants under the influence of wine.[2]

On the 16 May 1691, Leisler and Milborne were executed.[5] The court had sentenced them to be hanged “by the Neck and being Alive their bodyes be Cutt downe to Earth and Their Bowells to be taken out and they being Alive, burnt before their faces. . .”[citation needed] (In fact, the real villain [Robert Livingston] later bragged in writing that the pair were spared the disemboweling and were cut down before dead and decapitated by sword. The crowd then began fighting over their heads to acquire hair as a souvenir.) and by the English law of treason, their estates were forfeited to the Crown. Leisler’s son and other supporters appealed for justice from the committee of the Privy Council; it reported that, although the trial was in conformity to the forms of law, they nevertheless recommended the restoration of the estates to their heirs.